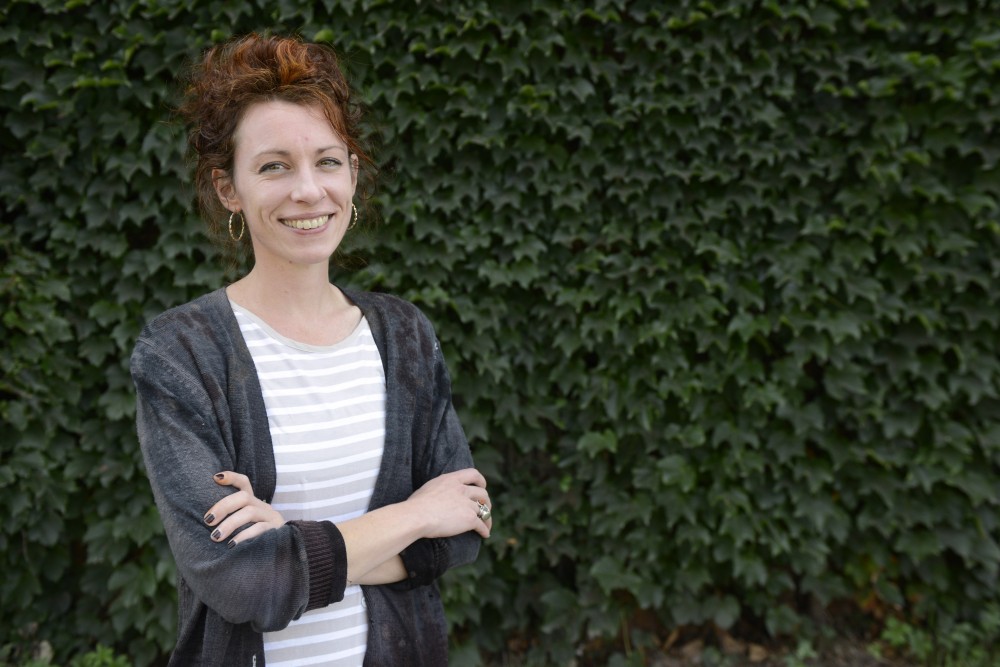 Ginger Jentzen, candidate for the Ward 3 City Council seat, poses for a photo outside her office in Northeast Minneapolis on Thursday, Aug. 31. Jentzen is known for her work with the $15 minimum wage movement in Minneapolis.

Vasseur is one of many students staffing Ginger Jentzen’s campaign for the Ward 3 Minneapolis City Council seat. Jacob Frey, the current Ward 3 city council member, will not seek re-election because of his candidacy in the mayoral race.

Jentzen, a member of the Socialist Alternative, has used grassroots organizing to appeal to constituents. She hopes this approach and her stance on affordable housing and police reform will earn her a spot on the city council this November.

Jentzen is vying for the city council seat alongside candidate Steve Fletcher, who won the DFL endorsement.

Jentzen appeals to students because she represents the working class, said Vasseur, who opted to take his fall semester off to make more time for her campaign.

Vasseur met Jentzen while she led the 15 Now movement, which urged the Minneapolis City Council to enact a $15 minimum wage. Council members passed an ordinance for the higher wage in June.

Some of the biggest issues on Jentzen’s agenda include affordable housing and police reform.

Affordable housing is currently one of the top priorities in Ward 3, Frey said. Ward 3 covers the Marcy Holmes and St. Anthony neighborhoods, where many students and faculty live.

“[Affordable housing] is important to students. There are many students who have trouble affording rent in the city,” Vasseur said.

Jentzen said she plans to address this issue by advocating for an increased tax on high-end developments to fund affordable housing.

She said she also wants to push for rent control.

With dorms at the University prioritized for freshman, students often must find alternative housing. This can be expensive, said Yadira Damazo, a junior sociology major and member of Jentzen’s campaign.

“It is often students … who would benefit from rent control, and they are often left out of the conversation,” Jentzen said.

She said she plans to hold discussions and events with students to help them engage with local government.

“We want to change the dynamic in City Hall. Right now, it is only big developers and big businesses in the conversation,” Vasseur said. “We want to give working people a voice in city hall.”

Jentzen plans to use her platform to create an elected review board with oversight of the Minneapolis police force, Damazo said.

“It is about making sure people have the resources they need,” Jentzen said.

Each Minneapolis city council member earns an annual salary of around $80,000, according to MinnPost. If elected, Jentzen said she will only accept half of that.

City council members shouldn’t make more money than those they represent, she said.

“I would donate the rest of [this] salary toward building up social movements that are really driving the working people in Minneapolis,” Jentzen said.

Reaching out to students and increasing voter turnout, she said, are also priorities for her campaign. Jentzen will speak at an event for the University student group, Women for Political Change, later this month.

“Generally, students do not vote,” Vasseur said. “We want to change that.”

The start of the semester has Vasseur, Damazo and other campaign members mobilizing. As the election approaches, they plan to ramp up student outreach on campus and encourage voter turnout.

Correction: A previous version of misstated who was running in the Ward 3 race.