Topher Grace tackles the '80s in “Take Me Home Tonight.” 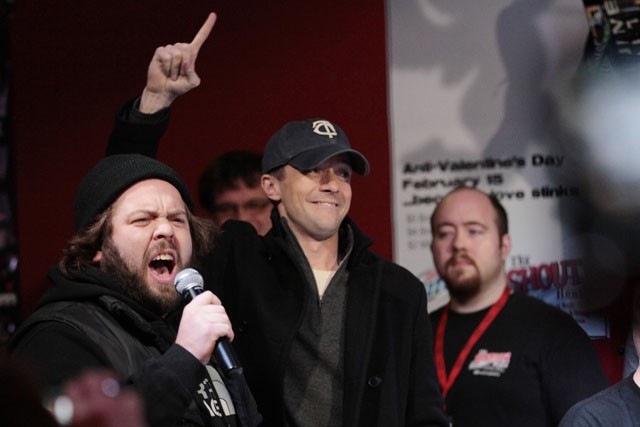 Dan Fogler, left, and Topher Grace sing along with piano accompaniment on Wednesday Feb 9 at the Shout House in Minneapolis. The two celebrities made an appearance promoting their new film Take Me Home Tonight, which releases March 4.

Nostalgia can be easy fodder for the comedy filmmaker, twice removed from their source material by time and the erratic revolutions of fashion. But making a movie about bygone days that appeals to oneâÄôs humor as well as to oneâÄôs heart is no simple task, especially when the time in question is the 1980s âÄî arguably the goofiest period in American cultural history.

Yet in spite of the apparent difficulties posed by honest retrospection, Topher Grace âÄî no stranger to the nostalgia racket âÄî sought to make a comedic film that would hold itself to a specific Reagan-era reality, a design that eventually solidified into âÄúTake Me Home Tonight.âÄù

âÄúWhat I was thinking at the time was, âÄòI wish I had been around when John Hughes was making movies,'” Grace said from the Graves 601 Hotel.

The attempted homage to Hughesian fare, which Grace stars in, produced and co-conceived, centers on Matt Franklin, an aimless albeit brilliant college grad who runs into his high school crush while dabbling in mediocrity at a Suncoast retail store. Franklin quickly constructs a Gatsbian conceit, representing himself as a self-assured Goldman Sachs man before heading off to a wild high school reunion party.

âÄúItâÄôs a really low concept movie; itâÄôs not like, you know, two people switch bodies or something,âÄù Grace said. âÄúItâÄôs a movie where three friends go to a party, go to another party at one point and come back. ThatâÄôs it. But we really wanted to show that other side âÄ¦ a âÄòLess Than ZeroâÄô kind of side.âÄù

Despite its basic premise and integral party vibe, Grace stressed the movieâÄôs sincerity as its key trait.

Grace further cements his earnestness by championing Matt Franklin and company rather than an overt aesthetic goal or the use of the time period as a plot vehicle.

âÄúPeople are so with the characters at the end âÄî that was really our hope âÄî was to make it kind of look like itâÄôs decade or time specific, or genre specific, and then have it at the end be more of a character piece,âÄù Grace said.

But GraceâÄôs dream of a genuine âÄò80s flick was almost destroyed when the studio that originally backed the movie became nervous about the amount of drug use depicted. ItâÄôs for that reason that âÄúTake Me Home TonightâÄù is just now being released, even though it was filmed in early 2007.

Luckily for Grace and crew, superstar producers Ron Howard and Brian Grazer came to the rescue, stressing that âÄúTake Me Home TonightâÄù remain unchanged. Ultimately, the movie found its way to another studio, so now, after four years, Grace can see his idea fully realized.

ItâÄôs unlikely that âÄúTake Me Home TonightâÄù will be as well received as nostalgia classics like âÄúAmerican GraffitiâÄú or âÄúDazed and Confused,âÄú but Grace is undoubtedly pleased that his baby is finally making it to the big screen.

âÄúWeâÄôre very lucky, and itâÄôs going to have a bigger opening than we would originally have had, so thereâÄôs no downside,âÄù Grace said. âÄúThatâÄôs why IâÄôm happy to do the press for it and say, I had the idea, I was there for the inception of the idea, and it is exactly what we wanted artistically.âÄù