Amber Fiser coming into her own as a starter with Minnesota

Fiser opened her season 3-0 over the weekend. 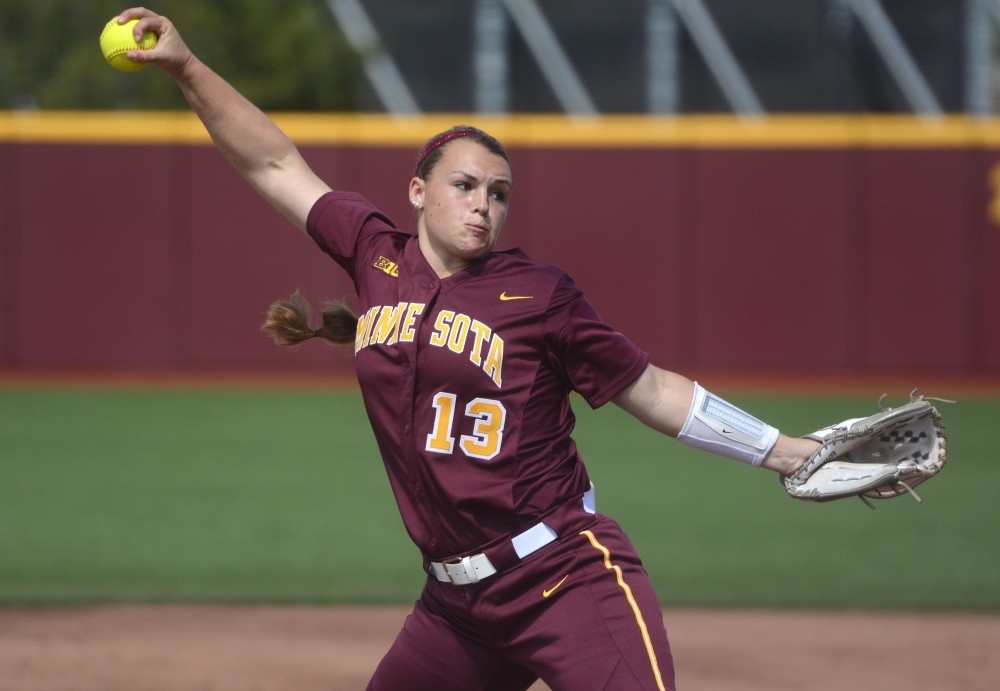 Amber Fiser could find herself as one of the Gophers top pitchers this season.

Before No. 14 Minnesota takes on its toughest opponents yet — Notre Dame and No. 8 Florida State at the Big Ten/ACC Challenge this weekend — Fiser made the case to pitch for Minnesota more often.

The sophomore pitcher started her season 3-0 for the Gophers in their first weekend of play and played in four of the five games on the undefeated weekend for Minnesota.

“I feel pretty comfortable,” Fiser said. “I see improvement not only in my team, but in myself. I have a lot more confidence and I know I’ve got to go out there and do my job.”

She pitched one shutout in the three starts and recorded her first collegiate save in the first game of the season. She got a career-best 10 strikeouts in the game against Creighton on Sunday.

Fiser is ready to lead the Gophers in pitching, and she is the longest-tenured pitcher on the roster as a sophomore.

“Fiser has the ability to do a lot of really good things based off her skill set,” head coach Jamie Trachsel said. “She’s going to get her opportunities [and] she’s going to continue to get better.”

Trachsel said before the season that the team was already a strong offensive and pitching team, and a lot of that can be attributed to Fiser.

In her freshman year at Minnesota, Fiser started 18 games and went 14-0. She had 83 strikeouts and a 1.68 earned run average. Now, five games into the season, Fiser has played in four games, started 3-0 and has one save under her belt.

Fiser said Iowa, the Big Ten team in her homestate, did not offer her out of high school.

“Minnesota was the first school that the coach had actually called and talked to me, so I knew [there was] something special about them,” Fiser said. “I talked to them, I came up here for a visit and fell in love with everything.”

Fiser joined the Gophers in time for the best season in terms of victories for the program. She earned a start on the final day of Minnesota’s season last year in the NCAA regional against Louisiana Tech.

She pitched the first five innings of the game and allowed one run. She eventually came out of the game for former pitcher Sara Groenewegen to pitch the rest.

Fiser said Groenewegen showed her how to be fearless. She said the confidence and effort that Groenewegen exuded gave Fiser the help she needed to get through every pitch. Outfielder Maddie Houlihan said she knows Fiser puts her best effort forth.

“I’ve seen such an improvement in her pitching and just in her confidence,” Houlihan said. “She thinks that she deserves to be out there.”

Though Fiser is the only returning pitcher on the team, she is tied with junior and LSU-transfer Sydney Smith for collegiate experience. The Gophers have two freshmen pitchers to cultivate, in addition to Smith and Fiser. With two opponents this upcoming weekend, pitching will be key.

“She has the ability to do great things,” Trachsel said. “She’s got a great test ahead of her and our defense will be behind her to support her.”