The effort is part of the City's Zero Waste Draft Plan. 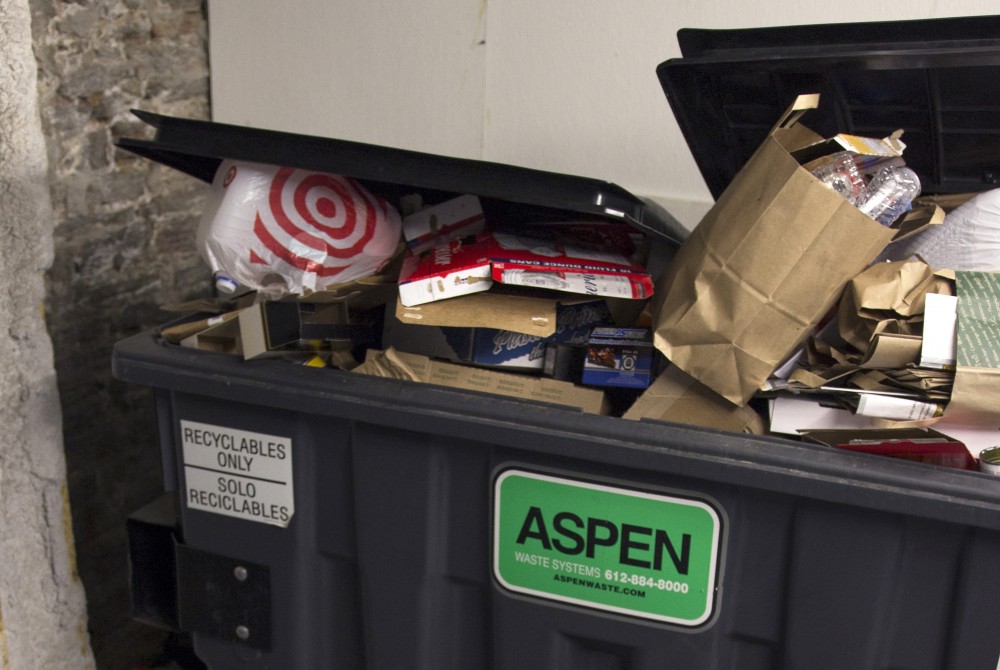 A recycling bin begins to overflow at Northstar Apartments on Sunday, Oct. 15

Minneapolis officials are trying to encourage recycling in apartments near the University of Minnesota as part of a citywide plan to cut waste.

The city’s Zero Waste Draft Plan identifies insufficient waste and recycling opportunities in multi-family housing complexes as barriers to achieving zero waste in the city. The plan, a collaboration between the Minneapolis City Council and Mayor Betsy Hodges, will go to the council for approval in early December.

“Every city has an opportunity to do more in terms of recycling,” said Halston Sleets,  Hodges’ senior policy aide for environment, justice and sustainability.

Hodges initiated the development of the zero-waste plan during her State of the City address in 2015. In June 2015, the city council established a goal of recycling and composting 50 percent of citywide waste by 2020 and 80 percent by 2030.

Ward 2 City Council Member Cam Gordon said cutting waste from apartment buildings — like those near the University — is a key step in meeting these goals.

“When we decided we really wanted to get a handle on our waste and start reducing it and getting close to zero, we realized that [student housing is] an area we really have to figure out if we have any hope of getting there,” Gordon said.

But Sleets said educating students on recycling options is difficult as they often relocate each academic year.

“It’s extremely difficult to continue a system with people who are only in a unit for roughly nine months of school,” Sleets said.

“Having the capacity to do composting [and] recycling just isn’t being provided in a lot of these multi-family, multi-unit buildings,” Sleets said.

The plan will help encourage organic recycling and composting options in the complexes, Gordon said.

This strategy is a simple, low-cost option for the City because officials would be encouraging apartment management to implement more expansive recycling services, Sleets said.

Getting apartments on board could prove to be a real challenge, as not all contract with the City.

Kellie Kish, recycling coordinator for the division of solid waste and recycling within the City’s public works department, said many residential buildings around the University contract with private haulers.

“The services offered to larger, multi-unit buildings may not necessarily equal what is offered to those in the smaller buildings that [the City provides] service to,” Kish said.

These strategies can be effective, but Sleets said the city ultimately needs more data from the apartments and haulers to reach its overall waste reduction goal.

“A lot of this change is going to have to come from really drilling down into the haulers and holding them accountable for producing us with these numbers,” Sleets said.

The public can still give input on the plan, Kish said. A seventh engagement session on the plan will be held Oct. 30.