The Uptown Theatre's employees use the marquee to make their mark. 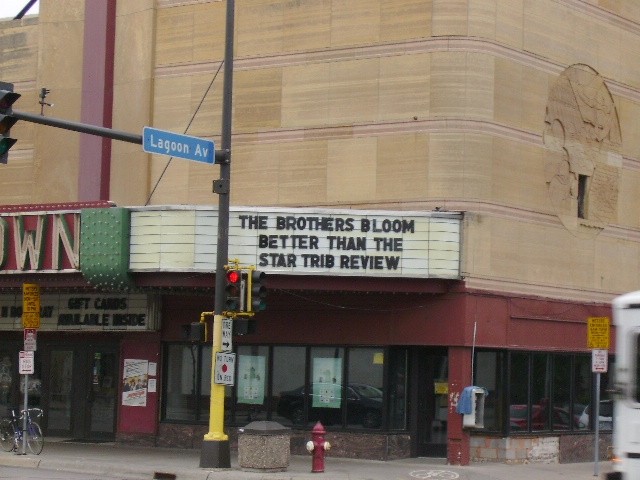 One of the Uptown's many humorous marquees on display.

Every week or so, the staff at the Uptown Theatre go about their routine of adorning the 70-year-old movie palace’s marquee with the title of the latest film to set its reels in motion on screen. Before they complete their handiwork, however, they’ll sign their names at the bottom.

But this signature is no ordinary John Hancock âÄî or Alan Smithee âÄî as it were. This gesture appears in the form of a referential or sarcastic addendum to every movie title and sometimes in place of it, whether it’s âÄúMel Gibson goes beyond Thunderdome in âÄòThe BeaverâÄôâÄù or âÄúThe AristocratsâÄô Funnier than Drew Carey.âÄù

Thanks to the savvy of a couple of employees and a love of cinema that goes beyond concessions, the Uptown’s marquee has become its own form of entertainment. With each joke that shines forth and captivates, passersby become the audience for what is the slowest comedy routine in the world. Spare us the rimshots, or we’ll be here all night. But is that really so much of a bad thing?

To some, apparently so. A âÄúWithering GlanceâÄù piece in the Star Tribune left two uncomfortably seated curmudgeons commiserating over the sad state of their sore behinds, and a feature write-up in Mpls. St.Paul Magazine described the theater with the word âÄúdumpâÄù no less than seven times.

However, these sour reviews and seat springs that feel torn right out of grandma’s mattress are no reason to overlook the Uptown’s art deco facade, its great success with special event programming and its picturesque interiors âÄî in need of repair as they may be.

Even if a feature at the Uptown received standing ovation, it may be because the seats are just that uncomfortable.

Larsen, who has worked at the Uptown for seven years, penned such marquee quips as âÄúJane Eyre: Based on a book, I thinkâÄù and a note that âÄúCave of Forgotten DreamsâÄù would be played âÄúIn Glorious 2D.âÄù

Assistant manager Rich Gill’s first memory of an embellished marquee was for the 2002 cult film âÄúBubba Ho-Tep,âÄù where âÄúEvil DeadâÄù star Bruce Campbell plays an aged and nursing home-bound Elvis Presley. Uptown employees subtitled the film, âÄúReturn of the King,âÄù in reference to its resurrected and geriatric protagonist but also as a nod to the âÄúLord of the RingsâÄù sequel that was playing in theaters at the time.

âÄú[Tabloid] was not very well attended,âÄù house manager Patrick Cross said, who also came up with the zinger, âÄúso we certainly didn’t think it was going to hurt it at all.âÄù

âÄúWe don’t try to get too risque or offensive,âÄù Gill said, though he and his co-workers had a few run-ins with the characteristic letter writers who were upset when a âÄúTen CommandmentsâÄù parody played at the Uptown in 2007.

For all their sarcasm, however, those in the marquee department rarely toe the line. Cross once put âÄúBride and Prejudice,âÄù an Indian film, up as having âÄúan all star caste.âÄù

âÄúIt was pretty dicey,âÄù Cross said. Whether the description raised an eyebrow or two, it remained up for the full run without incident.

While they wait for that renovation that seems perpetually fixed on the horizon, the Uptown’s employees will have to make do by attracting their audience with their bountiful wit and film knowledge.

The theater has long been a meeting and potential breeding ground for “The RoomâÄù and âÄúRocky HorrorâÄù fans and a classic standby for cinephiles looking to catch independent cinema features before they hit the Lagoon down the street.

The illuminated witticisms have been part of the Uptown billing off and on for the last decade, but in the last two years employees have managed to keep the good lines rolling.