Local bouncers, bartenders keep an eye out for U 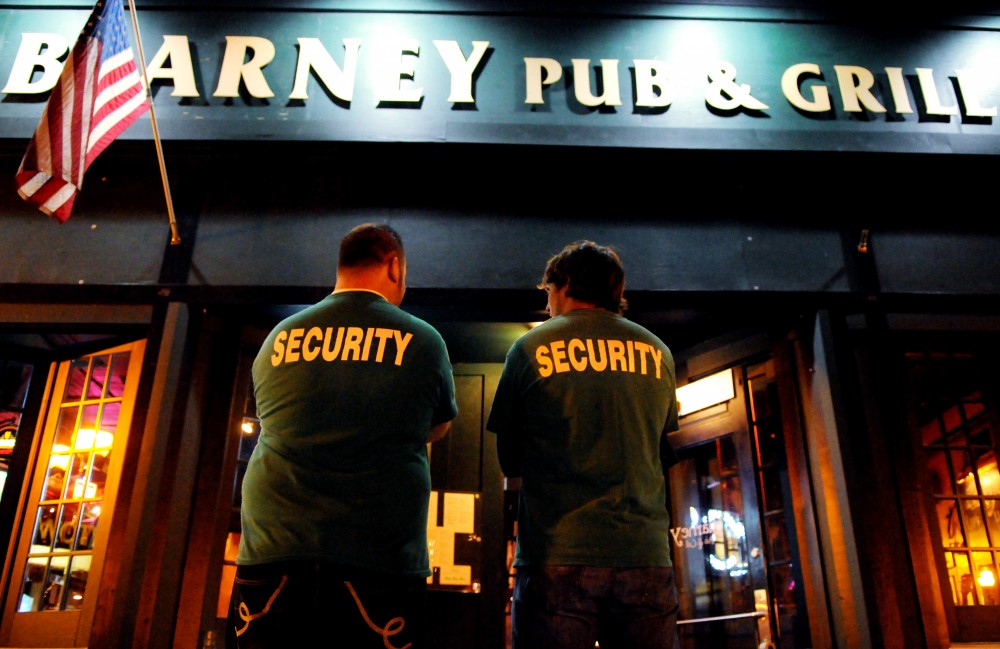 Taking orders and serving drinks keep most bartenders busy, but Mikey Southern, a bartender at SallyâÄôs Saloon and Eatery, has had to go through more to keep customers safe and happy. This summer, Southern, a journalism junior, saw two men fighting and dragged one of them out, only to find that they were covering two women fighting underneath them. Southern and other SallyâÄôs crew members removed the men and then broke up the two women fighting, he said. They later came back and Southern called the police. Bartenders and bouncers can be seen as the bad guys, keeping people out and cutting them off from the bar. But, they are meant to keep customers safe and help enforce the law, even if the customers donâÄôt see it that way. âÄúI donâÄôt really feel like the bad guy, IâÄôm just following the rules,âÄù said Southern. Alex Ulici , a âÄúdoor hostâÄù at The Library Bar and Grill, said they confiscate at least six or seven fake IDs each night, highlighting another common occurrence around the bar scene. While some bar staff take the IDs, others will just tell people to leave the premises. If the person doesnâÄôt agree with a bouncer that denied them, they can call a police officer. If the officer vouches for them, they can have the ID back and come in, Ulici said. âÄúBut, if itâÄôs not, itâÄôs a $500 ticket and they get arrested for the night,âÄù he said. Bouncers and bartenders have several techniques to spot fakes. Erik Selvaag , a bartender at The Big 10, said he makes sure they look legitimate by checking height and eye color, and will occasionally ask for a second ID as well. The University alumnus said itâÄôs usually obvious when an ID is fake and staff at the Big 10 wonâÄôt give them back. If bar staff fail to card people, however, there can be consequences. âÄúWe had an undercover bust and one of our bartenders failed and she was let go,âÄù Selvaag said. âÄúThe bar was fined and I believe she was fined as well. ItâÄôs pretty serious.âÄù Selvaag said in his five years of working at the Big 10, it was the only time any servers or bartenders were caught. Local bars also use different methods to help customers that have had too much to drink. âÄúWe donâÄôt let anyone [who has had too much] leave by themselves for safety reasons,âÄù Jacki Braun a graphic design senior and SallyâÄôs bartender said. âÄúWe normally try to call them a cab.âÄù Library bouncer Mike Maritato said they try to keep everyoneâÄôs safety in mind. âÄúWe just wake them up and help them out the door, maybe give them a glass of water on their way,âÄù Maritato said. Even though they are often surrounded by people having a good time, bartenders and bouncers say they donâÄôt feel like theyâÄôre missing out on the fun. âÄúItâÄôs really not as bad as you might imagine,âÄù Southern said. âÄúYou might have to work a weekend night here and there but usually have enough time to get stuff done if you want to go out.âÄù Although Braun said being a part of a campus restaurant and bar is time consuming, she doesnâÄôt mind. âÄúItâÄôs like a family community here, so itâÄôs really nice,âÄù she said.