The Gophers didn’t play a home game in February since 2013 prior to this season. 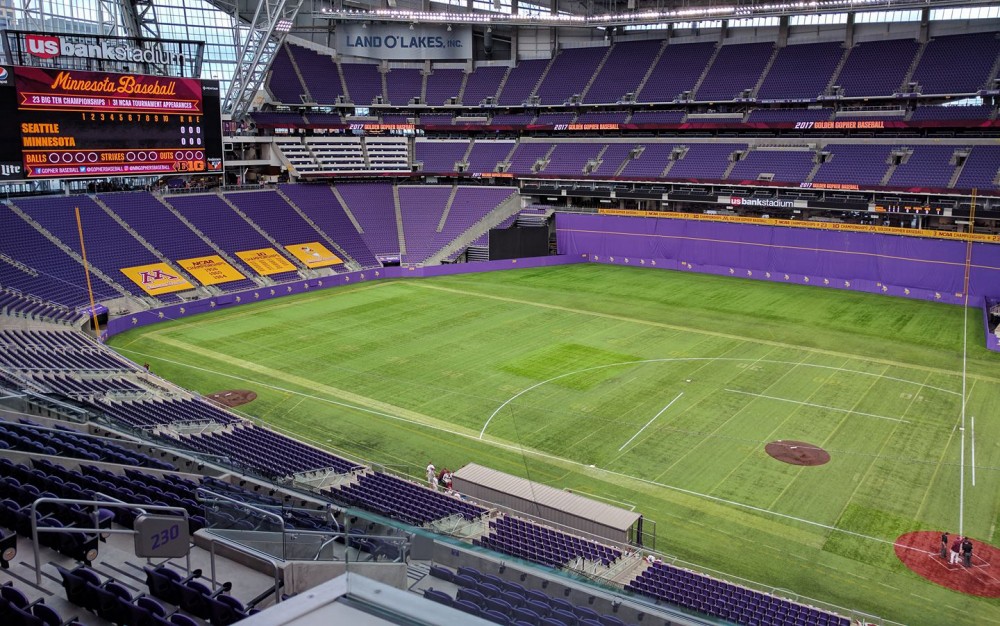 When Minnesota played Seattle University on Feb. 24 at U.S. Bank Stadium, it marked the first time the Gophers had played a home game in February since 2013.

Only two players on the current roster were a part of that 2013 team: Jordan Smith and Matt Stemper.

For everyone else, playing in Minnesota during the winter was a new experience.

“It kept our minds at ease that we were able to stay at home, see our families more often and just kind of do our own thing instead of being cooped up in a hotel,” said senior Brian Glowicki.

The right-handed pitcher added that the entire team’s performance was unaffected by playing more games at home to start the season, but he felt it helped him get ready to pitch multiple times in one weekend.

“You recover a lot better,” he said. “It’s a lot easier getting your body and getting your mind ready for every game when you’re at home compared to on the road.”

There are many benefits to playing at home rather than on the road, and that can show up both on and off the field.

Terrin Vavra said that reducing the amount of travel at the beginning of the season and being at home allowed him to miss fewer classes and helped him get more sleep.

As far as the specifics for the stadium itself, Vavra said the way the field was set up was, “a lot better than any of us expected.”

Not everything about the experience was positive though.

One of the downfalls to playing at such a large stadium is that it made any crowd seem miniscule.

U.S. Bank Stadium seats 66,200. The Gophers got over 2,000 fans at a few of their games, but the vastness of the stadium made that number feel much smaller.

“It seemed empty,” Glowicki said. “I know [the fans] are loud, and I can tell they’re loud just because of the echo throughout the place. It was a very weird atmosphere even with the good crowd sizes that we got.”

Prior to playing in the new space, Minnesota hosted home games at the Metrodome, which was a bit better for crowds at 46,564 seats for baseball.

The Gophers are back on the road after they played their last game of the season at U.S. Bank Stadium on March 12. They were in California over spring break, where they went 2-2 in the four games they played.

The team will be outdoors for the rest of the season, something Vavra said the team is eager for.

“After three straight weeks of playing in [U.S. Bank Stadium], we’re ready to get outside again,” he said.