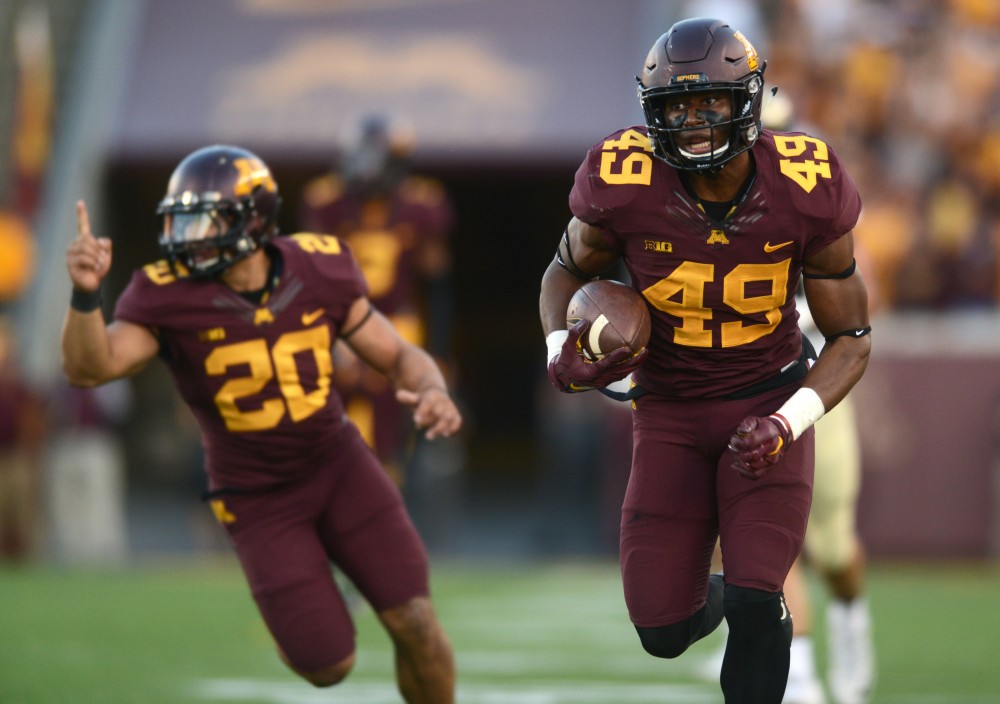 Gophers linebacker Kamal Martin runs into the end zone in an attempt to score for the Gophers during their game against Purdue at TCF Bank Stadium on Nov. 5, 2016, where the Gophers won 44-31.

There’s no question the Gophers’ rushing offense has been prolific this year. Running back Rodney Smith is second in the Big Ten in rushing yards and Shannon Brooks has done well in the games he hasn’t been injured.

However, some of that can be attributed to the easy rushing defenses the Gophers have faced. Minnesota has played six Big Ten games this season, and those six conference teams are the bottom six rushing defenses in the Big Ten.

Nebraska’s rushing defense ranks sixth in the Big Ten, so they will be the best group Minnesota has faced this year. Still, the Huskers have allowed over 200 rushing yards in a game three times this season, so Minnesota could see success here. It might be tough but the Gophers have the edge.

When Nebraska runs the ball:

Nebraska doesn’t have a running back of Brooks’ or Smith’s caliber, but its rushing offense is still good.

Quarterback Tommy Armstrong Jr. – who is currently listed as questionable for the game – is a mobile quarterback and averages 48.7 rushing yards a game. Nebraska running back Terrell Newby averages 71.3 yards a game, only 10th in the Big Ten.

The Gophers’ rushing defense has been very good this season. They are third in the Big Ten and opponents have combined for only 112 rushing yards in the last two games. With Armstrong Jr. questionable for Saturday, limiting Nebraska on the ground should be easy for the Gophers.

It has been over a month since quarterback Mitch Leidner threw his last touchdown. In that span, he’s thrown five interceptions but rushed for four touchdowns on the ground. He has done well, but it hasn’t come through the air.

Leidner’s receiving options have been limited. Senior Drew Wolitarsky leads the team with 45 receptions, and the next closest player was Brian Smith Jr., who had 17. Smith Jr. was kicked off the team ahead of Saturday’s game against Purdue.

Nebraska’s passing defense allowed 352 yards against No. 6 Ohio State but has done reasonably well in other games. The Huskers are 10th in the Big Ten in passing yards allowed but lead the conference in interceptions. Leidner hasn’t played well enough recently in the air to take advantage of Nebraska.

When Nebraska passes the ball:

There are a lot of unknowns about this matchup because Armstrong Jr. is still questionable for the game. His backup, Ryker Fyfe, only has 23 attempts this season so it would be a break for Minnesota if Armstrong is out.

Nebraska has a good group of receivers. Four players – Stanley Morgan Jr., Jordan Westerkamp, Alonzo Moore and Brandon Reilly – have all averaged over 40 yards a game. Fyfe will have a lot of options if he were to start Saturday.

Nine games into the season, Minnesota’s passing defense has been very bad. They are second to last in the Big Ten in passing yards allowed per game and have allowed 18 touchdowns to just eight interceptions. Armstrong Jr.’s status changes this matchup greatly, but Nebraska still gets the edge here no matter who plays.

Nebraska beat Minnesota at TCF Bank Stadium by 23 points last year. This game should be closer, but still expect a home win for the Huskers.

Around the web on the Gophers and the Huskers:

-Dirk Chatelain of the Omaha World-Herald penned a great column on Mike Riley’s culture change in Nebraska. Riley is a very different coach from Bo Pelini and this piece is about who Riley is and how he’s changed Nebraska football. Good, long and fascinating read.

2. Half of six targeting calls on Gophers could have gone other way

-The Gophers have six targeting calls this season, with three of them coming in their last three games. Andy Greder of the Pioneer Press examined the average number of targeting penalties on each FBS team, and takes a look at each call on the Gophers with comments from defensive coordinator Jay Sawvel and head coach Tracy Claeys.

3. Prepping for Gameday: From hot dogs to Runzas to Val’s, food is big business at Husker games

-I’m a sucker for these stories. The Lincoln Journal Star’s Ken Hambleton looked at the numbers for how much food is sold at Nebraska football games. This is a well-sourced story with awesome statistics. Spoiler alert: for an average game, Nebraska sells somewhere around 16,000 to 17,000 hot dogs and 13,000 Runzas.

4. Scoggins: Despite 7-2 record, how good the Gophers are remains a mystery

-The Star Tribune’s Chip Scoggins wrote that even with only three games left, how good the Gophers have been is still somewhat of a mystery due to their easy schedule. A good note from Scoggins’ story: The Gophers’ first nine opponents have a combined record of 36-46 … Their final three opponents combined are 18-9. As he wrote, Minnesota’s next three games will tell us a lot more about the team then the previous nine will and may just decide Claeys’ future with the program.

-Nebraska lost 62-3 (!!!) to No. 6 Ohio State last Saturday. Brett Nierengarten of the Daily Nebraskan wrote about how it brought up memories of the Bo Pelini era. Nebraska started the season 7-0 but now have the same record as Minnesota. Nierengarten wrote that games like this happened a lot with Pelini but this was the first of its kind under Mike Riley. A good column on a bad loss and what one game can mean for a program.

1. A win against Nebraska would be big, but still not enough to win the West

-A Minnesota win against a ranked Nebraska team in Lincoln would be huge for the Gophers. It would keep their Big Ten West hopes alive and show themselves they have the ability to win these tough games. However, the Gophers would still have a ways to go if they want to win the Big Ten West. A home matchup against Northwestern won’t be easy and then Minnesota would still have to beat No. 7 Wisconsin on the road for the first time since 1994. The Gophers could be 9-2 heading into Madison with the Big Ten West on the line, but that matchup against Wisconsin will be incredibly difficult to win.

-I touched on this in a mini-tweet storm earlier in the week and above in this column, but Rodney Smith has yet to face a good rushing defense, and that needs to be considered when talking about him as one of the best running backs in the Big Ten. There is no doubt in my mind that Smith is a very talented player. He’s second in the Big Ten in rushing yards a game and averages over a touchdown a game, but he needs to replicate those against harder defenses to prove that he is one of the best in the conference. A good game against Nebraska would be a step in the right direction; something he is very capable of.

-The last time Mitch Leidner threw a touchdown pass came on Oct. 1 against Penn State. Since then, he has 116 pass attempts without throwing for a touchdown, easily a career high. The Gophers have still done well in that time, as they’re on a four game winning streak, and Leidner has done well on the ground. He’s rushed for four touchdowns, but that is still a lot of pass attempts without a touchdown pass. He’ll need to improve if Minnesota wants to win against Wisconsin, as the Badgers have an elite rushing defense but an average passing defense.

-Emmit Carpenter hit two field goals of over 50+ yards on Saturday, earning him Big Ten Special Teams Player of the Week honors for the second time this season. The kicker was next door neighbors with former Minnesota punter Peter Mortell growing up, and Mortell speaks about Carpenter’s strong season and gives his thoughts on it.

2. Questions from the Other Side: Nebraska football beat writer Brett Nierengarten

-For this week’s Questions from the Other Side, the Minnesota Daily spoke with Brett Nierengarten, the senior sports editor and a football beat writer for the Daily Nebraskan. Nierengarten talks about the status of Nebraska’s football team after two straight losses, how the Gophers and Huskers stack up against each other and shares his predictions for the Big Ten Player of the Year and the Heisman.

-An update from Tuesday on the Gophers heading into the matchup against Nebraska and what their Big Ten West chances are looking like.

4. Minnesota turns it around in second half against Purdue

-Feature from the Purdue-Minnesota game on the Gophers staging a second half comeback against the Boilermakers.

-Game recap from the Minnesota-Purdue game.