MSA hopefuls square off in debate

The two pairs of candidates talked about their campaign ideas and increasing student involvement. 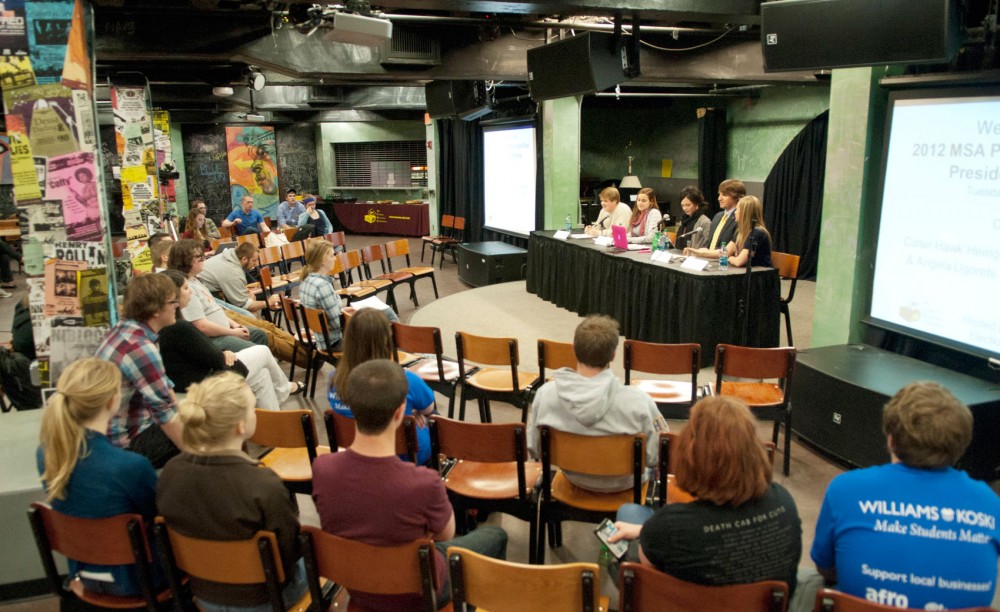 MSA presidential and vice presidential candidates debate Tuesday evening at The Whole. Voting will take place between April 2 and April 4.

Four undergraduate student government leader hopefuls met for a debate Wednesday evening — less than a week before elections start — to prove why they would be the best choice for student body president and vice president.

Taylor Williams and Colter Heirigs, both candidates for president of the Minnesota Student Association, were given the chance to answer questions presented by students and the All Campus Elections Commission.

The two candidates agreed on many issues, but at one point, a member of the audience asked for a specific topic that the two disagreed on.

Williams said one of his top priorities is to build coalitions within student government and the student body to help accomplish goals.

But Heirigs said he thinks he and his running mate, Angela Ugorets, are already building coalitions. He pointed out that they are both involved outside of MSA and can bring in new people.

“We can tap the people in student government all we want, but we need the people outside to come to us,” Heirigs said. “One of the easiest ways we can make students matter is bringing more diverse students to the table.”

Ugorets said she believes in creating a grief absence policy to allow students to leave school for a time period if they lose a loved one. She said that currently the absence is up to the teacher, but she thinks there should be a uniform policy for the University.

Jilian Koski, who is running for vice president with Williams, agreed with that idea because her dad passed away in August but said her most significant change would be implementing a medical amnesty policy.

That change would prevent underage students from facing consequences — like receiving a minor, being removed from an athletic team or even forced to leave the dorms — if they call for help regarding a friend’s excessive drinking.

“Someone’s life is a lot more important than getting kicked off of your athletic team,” Koski said.

When the presidential candidates were posed the same question, Williams said if he could change anything, it would be to lower tuition — even if that’s not possible within the realm of student government.

He said he wanted to advocate for tuition decreases whenever possible so students can “focus on academic life rather than having to work away to afford the University of Minnesota.”

Heirigs, agreeing with the other candidates, added that he would create a voting absence policy.

He said that currently, Minnesota allows employees time off to vote and that students should have the same opportunity.

The candidates continued to agree throughout the night, as both presidential hopefuls said they would utilize social media to help improve communication within MSA and further outreach efforts, create a medical amnesty policy, stress the importance of increasing campus safety and allocate more money to Boynton Health Service to help with the increased usage in mental health services.

While the vice presidential candidates share many of the same ideas for the future of student government, their beginnings in MSA differ.

Koski, a freshman, joined MSA right away when she became a ranking at-large representative during her first forum. From there she said she decided to make MSA the sole club she would focus on.

“I love everything we do, and I have a heart and a passion for this,” she said.

Ugorets, a junior, got involved in student government later in her academic career after she was involved in other student groups first.

She said that her experience — as well as she and Colter’s diverse backgrounds — will draw in more student group involvement and outside views to student government.

But Koski said she and Williams have known each other since seventh grade and that their friendship will create strong leadership for MSA.

Students will be able to vote for the candidates of their choice on April 2–4 either at voting stations around campus or online.