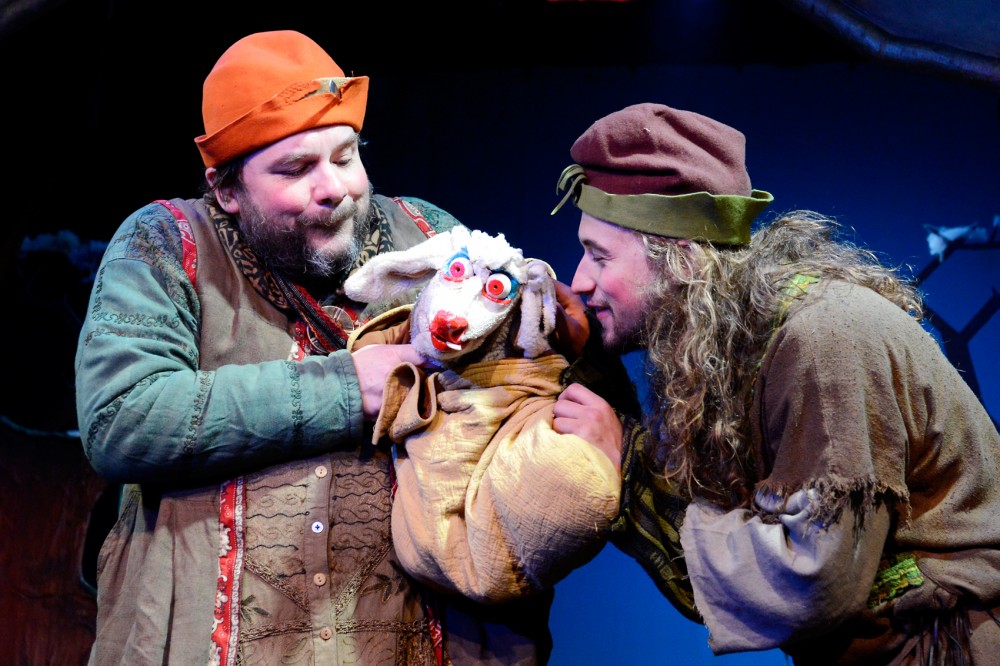 by Danylo Loutchko
Open Eye Figure Theatre captures Satan in an uncommon mood — he’s bored.
The theater’s upcoming revival of “The Holiday Pageant” is an all-ages comic retelling of the Nativity story from Satan’s point of view. Michael Sommers, founder of Open Eye and a theater professor at the University of Minnesota, wrote the play which features music by Victor Zupanc.
The show is based on mystery plays, which are popular medieval plays about the birth of Christ.
“I just kind of wrote it and did my own version, and it’s based on the point of view that Satan is despondent because mankind is so base and vile that it just doesn’t matter,” Sommers said, who also plays Lucifer in the show.
Sommers said he had the original idea after watching the film “Fanny and Alexander” by Ingmar Bergman.
“[In an early draft of the show], I made a little 15-minute version of the Nativity story with cardboard sets and people. It was very histrionic, like with bathrobes and fake beards, and then we invited all our friends,” Sommers said.
After a few years, the show’s attendance surpassed 100 people and became too big for Sommers’ living room, so he created a bigger version, a full evening show that became “The Holiday Pageant.”
The original cast of “The Holiday Pageant” included Luverne Seifert, another theater professor at the University. He’ll reprise his role as the shepherd in the production.
“[Sommers’ son] started when he was 7 or 8, and now he’s in his later twenties. He’s still doing the exact same part,” Seifert said. “We’ve had iterations of his character. We called him ‘teen-boy;’ we’ve called him ‘man-boy.’ Now, we’re trying to find what the next one is.”
The new run of “The Holiday Pageant” at Open Eye is the first after a several-year hiatus.
Since the cast has done this show many times before, they are comfortable with it and play off of each other, he said.
“The actually intense process of creating the piece probably happened in the early years. Since then, it’s always been … putting it back on its feet and that’s always been joyful because we know our parts very well. … We keep trying to add new things each year, too,” Seifert said. “There’s a very strong competition between us all to try and get laughs.”
It’s never been the same show — this year, a 12-voice choir was added, and the band is pared down.
“Victor Zupanc, the composer, did the original music. It was a much bigger orchestra [in the past], so we kind of replaced [it] with this choir and thinned down the orchestra to three voices: trumpet, violin, accordion and trombone doubled and a little bit of percussion,” Sommers said. “This choir adds a nice thing. It’s all volunteers, so they’re really excited to do it. The music’s really fun, and it adds another kind of energy.”
However, this may be the very last time people can see this particular version of “The Holiday Pageant.”
“After this version it’s going to get tucked away,” Sommers said. “So this is the last time you’ll ever see these people on stage together or these people playing these parts or even this version. Like I’m actually thinking about taking the set and setting it up in the country like a shrine and just leaving it in the woods somewhere.”
“The Holiday Pageant”
Where Open Eye Figure Theatre, 506 E. 24th St., Minneapolis
When Dec. 11-21; 2 p.m. Sundays, 7:30 p.m. other days
Cost $25 general admission, $15 students
Delete Image
Align Left
Align Center
Align Right
Align Left
Align Center
Delete Heading