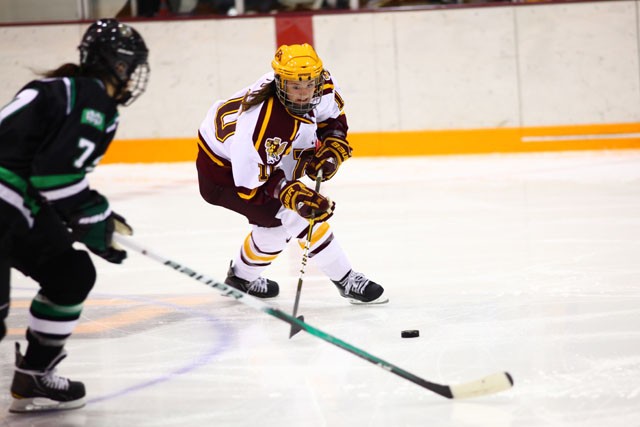 They were 28-0 all-time against the Fighting Sioux. Only two games had been decided by one goal, and the Gophers had trailed North Dakota or been tied going into the third period only twice. Yet UND came into this weekendâÄôs series with two all-WCHA, Olympic silver-medalist transfers, Jocelyne and Monique Lamoureux, who helped the team build its national ranking and defeat top-ranked Minnesota-Duluth the week before. Something had to give. Although not nearly the underdog they were in past years, No. 8 UND struggled to a 4-3 victory Friday night and then completed the sweep with a 3-1 win Saturday at Ridder arena âÄî a task not accomplished by any team since eventual-national-champion Wisconsin in 2007. âÄúLast night, I thought we played well enough to win, and we didnâÄôt,âÄù head coach Brad Frost said. âÄúAnd tonight we just didnâÄôt play as well as we needed to to win a hockey game.âÄù When Becky Kortum scored on an unassisted goal 80 seconds into FridayâÄôs game, it appeared the game would shape up like any other of the past 14 UND-Minnesota series. Yet UND answered each Gophers goal. When the Gophers took 1-0, 2-1, and 3-2 leads, UND returned the favor with equalizing goals. Tied 3-3 going into the third period, the Gophers allowed a quick goal to defenseman Jordan Slavin that provided to be the dagger. They struggled to generate offensive production after that, tallying just eight shots in the third period. After the final whistle, a few of the veteran players for each team began to quarrel behind the UND net. When all was said and done, 70 penalty minutes were assessed to the two teams including game misconduct penalties to the GophersâÄô Sarah Erickson and Jen Schoullis and North DakotaâÄôs Sara Dagenais and Ashley Holmes. While the number of penalty minutes on the weekend was inflated by the post-game events Friday night, 16 penalties during play killed momentum all weekend for the Gophers. Three penalties in just over a three-minute span Friday night allowed UND a two-man advantage that led to Monique LamoureuxâÄôs game-tying goal late in the first period. Goalie Alyssa Grogan received an interference penalty with less than five minutes left in the game that hampered comeback efforts. âÄúIt felt like we had built momentum with three or four shifts and then we would take a penalty,âÄù Frost said after SaturdayâÄôs loss. After the fast-paced game Friday, the teams slowed the pace Saturday. Kelly TerryâÄôs second goal of the series tied the game at one early on, but Minnesota managed just 15 shots in the second and third periods while UND responded with two goals. Frost moved Erickson to the second line and Terry up to the first line in an effort to increase offensive production, but the move didnâÄôt generate as much as Frost would have hoped. âÄúIt was something we had to try because KesselâÄôs line wasnâÄôt doing as much as we need them to do,âÄù Frost said. All-American goalie Noora Raty was in street clothes behind the GophersâÄô bench for SaturdayâÄôs game. She and Grogan had been alternating in the net, but an undisclosed injury kept her out of her series.