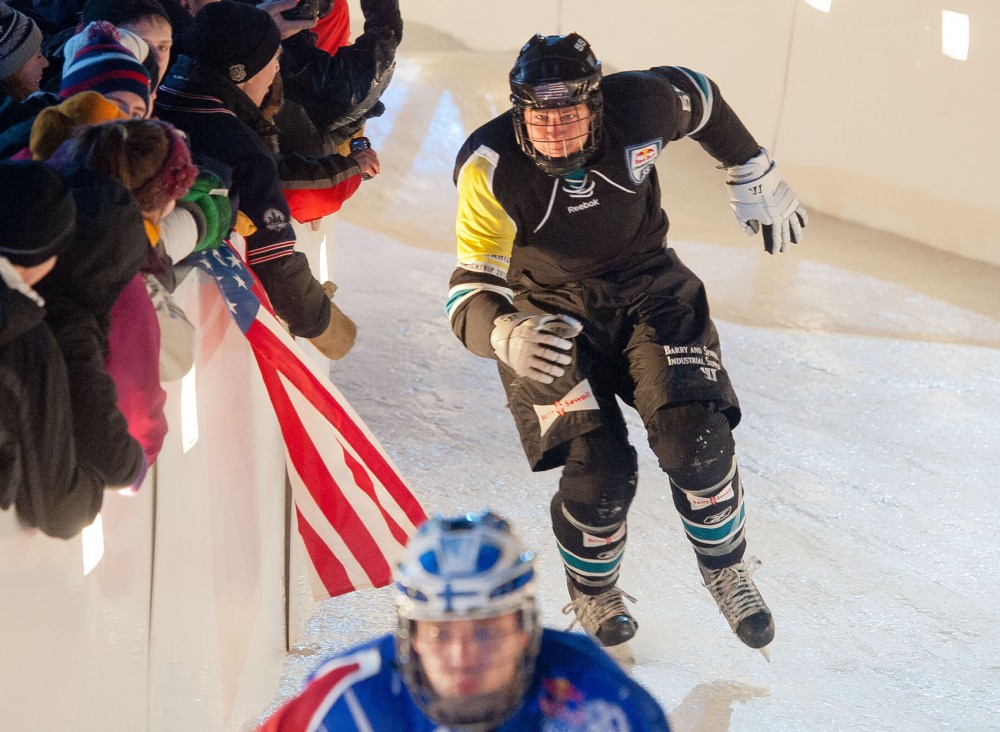 Former Gophers hockey player Brian Schack pursues Finn Paavo Klintrup through a heat during the round of 64 on Saturday, Jan. 26, 2013, in St. Paul. Schack played for Minnesota from 2006-10.

An average Gophers men’s hockey game consists of three 20-minute periods on flat ice and numerous checks into the boards.

An average ice cross downhill run consists of plunging nearly 50 feet down a 400-meter track, navigating various turns and jumps all while trying to avoid crashing into the three other athletes on the course.

Team USA coach Charlie Wasley and U.S. athlete Brian Schack are both former Gophers hockey players who have found a new niche in the growing sport of ice cross.

Both were at the Red Bull Crashed Ice event during the weekend in St. Paul, which drew more than 100,000 spectators. Schack finished in the round of 32 athletes Saturday.

Although they hail from different eras — Wasley played from 1992-96 and Schack from 2006-10 — the two have bonded over their shared path from Minnesota college hockey to an international extreme sport.

“Being from the U, obviously you have a bond immediately,” Schack said. “The group is so tight and so small. Not everyone can say that they’re a University of Minnesota hockey alum.”

The sport of ice cross began in Sweden in 2001. Two years later, Duluth, Minn., hosted the first competition in the U.S., where Wasley made his debut.

Wasley said he walked into the event without any experience, but he ended up finishing fourth overall. From then on, he was “hooked.”

Wasley said there is no other sport quite like crashed ice.

“It’s an amazing rush to come flying out on skates down ice, drop in four-and-a-half stories going 40 miles an hour and flying by 80,000 fans,” Wasley said.

“Personally, I like that whenever I need any information, he’s got it,” Naasz said. “Other than that, I really like that he lets me do my thing, too. He just lets it be known that he’s there if we need him.”

Naasz said he was initially intimidated by Wasley since he was the coach. But once he saw Wasley’s facial hair, Naasz knew he wasn’t as threatening as he seemed.

“The one thing that I think of when I think of Charlie is usually some sort of crazy mustache or beard,” Naasz said. “Last year when I met him he had a big full beard. And then this year I hadn’t seen him in a while … and he had a mustache with little loops on the end and mustache wax.”

While Schack first heard whispers about Red Bull Crashed Ice in 2004, his first real experience came as a spectator at last year’s event in St. Paul, where a few of his friends competed.

“I went down to St. Paul and watched and cheered those guys on, and I was just like, ‘Wow, this sport is awesome, like how do I get involved?’” Schack said.

Schack thought he had missed his chance to compete until his longtime friend and ice cross competitor John Palmeri informed him of a qualifying event in Winnipeg, Canada, a few weeks later.

“[Schack] and I drove up on a Friday night after work,” Palmeri said. “It was about an eight-hour drive. We got in at about midnight, 1 a.m. and got up the next day at 6 a.m. … and we slept on our bags like all day waiting for the Red Bull staff to get there.”

The wait was worth it. Schack qualified for an event in QuÃ©bec, where he finished first out of 128 racers in the time trials.

“He’s a bigger guy, and he carries his speed well down the course,” Wasley said of Schack.

Schack, who has only competed in three events so far, said his main strategy stays the same during each run.

“I’ve kind of got a routine down,” Schack said. “To me, it’s similar like going into a hockey game … just the mental preparation of what you’re going to see, what you should anticipate.

“Walking up to the starts, it’s just a very exciting, adrenaline-rushing moment,” Schack said. “It’s a feeling you really can’t describe until you do it.”

Wasley, 38, played for Edina High School and the St. Paul Vulcans junior hockey team before he joined the Gophers from 1992-96.

His mother, Kathy Wasley, said her son loved skating since age 2 and earned his defender position at a young age, but not before he learned a crucial skill.

“He was just a real warrior on defense,” Guentzel said. “He was one of the guys that’s kind of a throwback player. He blocked shots. He played physical. He played hard in the tough areas.”

“He was a very aggressive defender actually,” Bahr said. “He got into a big duker up in North Dakota one year with one of their big guys, and everybody was kind of like, ‘Holy cow Charlie, we didn’t know you had that in you.’”

Wasley was drafted 100th overall in the 1992 NHL draft by the QuÃ©bec Nordiques, who later became the Colorado Avalanche. The same year Wasley graduated, the Avalanche won the Stanley Cup and released him as a free agent.

“I took a hard look at what I wanted to do with my life,” Wasley said. “I was a little burnt out and didn’t want to spend my life in the minors trying to work my way up without a contract. So that’s when I retired from that hockey.”

Schack, 26, made a similar decision. The Lino Lakes, Minn., native played for Totino-Grace High School and spent a year in junior hockey before coming to the Gophers from 2006-10.

Guentzel said Schack and Wasley were similar defenders on the ice.

“He could skate. He was strong. He was physical,” Guentzel said of Schack.

He was well-liked by his teammates and a good fit in the locker room as well, Guentzel said.

Schack wasn’t drafted and said he didn’t have a clear, defined route to playing professionally, so he chose to move on from that dream.

“Sometimes I do regret that I didn’t try and play,” Schack said. “But now I think I’m happy with the decision I made.”

Away from the track

While Wasley and Schack eventually found their way to Red Bull Crashed Ice, they also managed to find fulfilling careers away from the track.

“He’s very, very, very, very good at teaching kids,” Burns said. “From shooting, to the skating, to stick handling, he brings a good, enthusiastic attitude on the ice always, and he’s just really focused on helping the children.”

Schack said while Tape2Tape Minnesota may be his job, it feels more like a hobby.

“I remember being that age,” Schack said. “It’s just really fun to work with little kids. … It’s not really like a job to me.”

Cathy Lee of Edina, Minn., said that Schack teaches her 13-year-old Jackson Lee and that he “works Jackson pretty hard.”

But Jackson Lee said Schack is a fun teacher and is sparking his interest in ice cross.

“He actually showed me how the course of Crashed Ice is,” Jackson Lee said. “He kind of set it up, and we kind of raced around it.”

Burns said it isn’t uncommon for students to ask Schack about the Gophers or Red Bull Crashed Ice.

“They absolutely followed Brian back in the day when he was at the U of M, and they always ask stories and who he played with and who went to the NHL,” Burns said. “It’s just a great fit.”

“Any time you get into the room, you’re going to know Brian’s there,” Palmeri said. “He’s pretty chatty.”

While Red Bull Crashed Ice has been around for more than a decade, it doesn’t have much exposure outside of Minnesota, Schack said.

Wasley said he has seen the sport become more popular since his start in 2003.

“I actually get asked more about Red Bull Crashed Ice and what’s it like to be a competitor in that … than I do about playing for the Gophers,” Wasley said.

Wasley said he has already noticed an increase in popularity since last year’s St. Paul event.

Ice cross downhill is similar to the winter Olympic sports of snowboard cross and ski cross. Wasley said it wouldn’t be a stretch to see Crashed Ice in the Olympics one day.

Schack said the skills displayed in the sport are comparable to that of Olympians.

“I think it would be a great addition to the Olympics because all these guys are extremely athletic, and it’s just quite a sport to watch,” Schack said.

But the path to the Olympics — much like an actual Crashed Ice track — may not be as straight as it seems.

For example, the snowboard half-pipe started gaining popularity around the early 1980s but wasn’t added as an Olympic event until 1998.

Whether ice cross downhill makes the transition from extreme sport to Olympic sport, Bahr said he still thinks it is the perfect outlet for former hockey players.

“I think it’s phenomenal for old hockey players and rink rats,” Bahr said, “that they have an avenue to go down.”