Sophomore Shane Wiskus won three events, setting career highs in each of them. 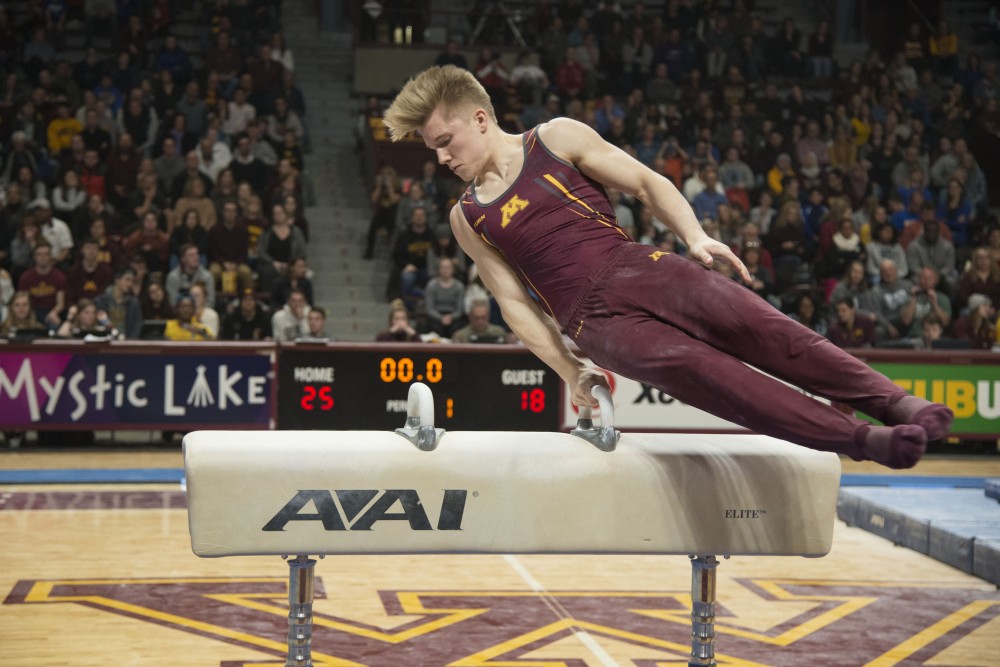 Sophomore Shane Wiskus competes in the pommel horse at the Maturi Pavilion on Saturday, Jan. 26.

The Gophers men’s gymnastics team has begun to hit their stride.

“I’m really proud of this team, each week I see more and more growth from them, which is very satisfying,” said head coach Mike Burns.

Sophomore Shane Wiskus led the way for the Gophers, competing in four events: pommel horse, vault, parallel bars and high bar. Wiskus notched three career-highs in vault (14.800), parallel bars (14.800) and high bar (14.200), which earned him first place in each event. He also placed third in the pommel horse, scoring 13.500 for his best performance on the event since the first meet.

“He was the man today, he stepped up,” Burns said. “He did a new routine on parallel bars that we have been debating on if we should attempt because it’s pretty challenging, and he just did a great job, stuck the dismount. He was just in a zone all the way around.”

Wiskus, who usually competes all-around, took a lighter workload in order to be fresh for next week’s Winter Cup. The competition features top gymnasts from around the country, including teammate Shaun Herzog. It will help determine who makes it onto the men’s national team for the 2020 Olympics.

“It’s really important to prove to myself that I’m good enough to hang up there with everyone,” Wiskus said. “I made [the national team] last year and missed it in August, so that was a really emotional time for me. But I’m starting to feel like my old self again and I have a lot more to give … I feel like next week is going to go well for me.”

Senior Justin Karstadt took Wiskus’ place competing in all-around, a role he had not filled since his sophomore year due to injury. He notched a first place finish on rings with a score of 13.600,  finishing in second place on the high bar and vault. Karstadt, a native of Canada, is also preparing for a national competition in March to earn a spot on the Canadian national team.

“It was a landmark meet for me, I’ve had my eyes set on this date for a long time,” Karstadt said. “[The Olympics] are everything to me, ever since I was a kid my goal was to get to the Olympics and it’s getting to that time. … I feel I have a statement to make in March.”

Freshman David Pochinka finished with career-bests on pommel horse (13.550) and high bar (13.050), finishing in second and third in the events. He also added a second place finish on rings.

“He just continues to find his comfort zone,” Burns said. “At the beginning of the year, he had his struggles with that and you can start seeing that he’s got this calmness about how he competes, where before he was kind of jittery … the jitters seem to be gone now.”

Senior Shaun Herzog put together a season-high performance on the floor exercise, finishing with a score of 14.150, which won him the event. However, Herzog tweaked his back while dismounting the vault and was held out of his high bar routine. The injury isn’t believed to be serious. His absence on the high bar was a precautionary measure.

Wiskus and Herzog will hit the mats Friday, Feb. 15 in Las Vegas at the Winter Cup, with the rest of the team traveling to Nebraska for a tri-meet against Nebraska and UIC on Saturday, Feb. 23.