After a 55-0 loss, Brewster still looking for the good 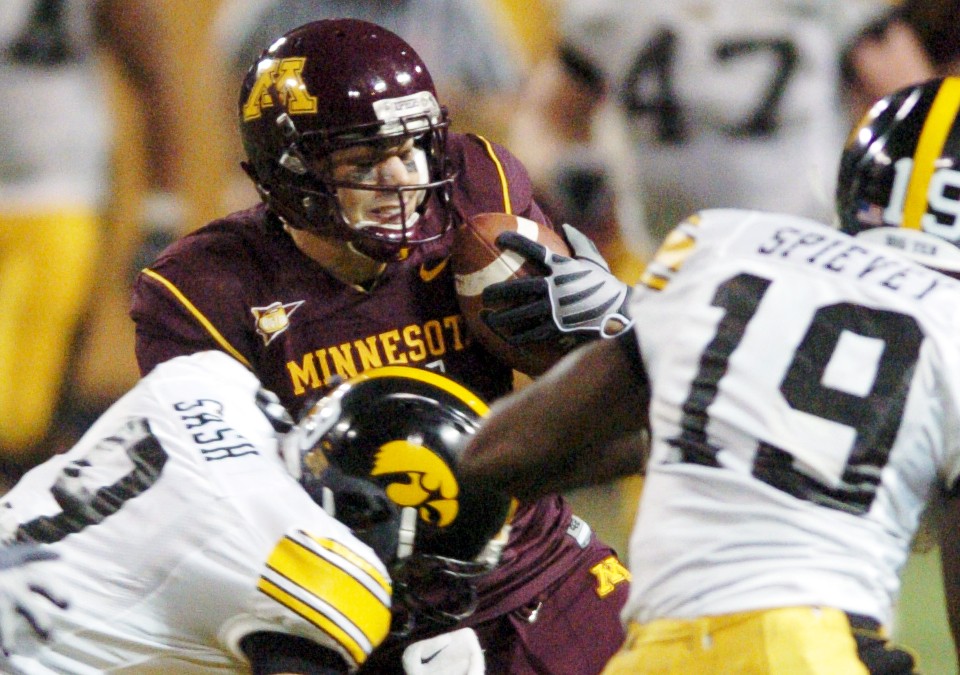 If thereâÄôs one thing Tim Brewster will never be accused of, itâÄôs being a pessimist. In a postgame press conference during which his second sentence was, âÄúWords canâÄôt express the disappointment that I feel,âÄù and after a game in which the high point was when the score was tied 0-0, the second-year head coach was sure to find the silver lining. When asked if this loss would stick with his team during its bowl preparation, his answer was an emphatic âÄúno.âÄù âÄúYou know me,âÄù Brewster said. âÄúIâÄôm going to accentuate the positive. IâÄôm gonna find, somehow, someway, some positive things out of this game.âÄù It didnâÄôt take him long. âÄúHow about Troy Stoudermire? Was that boy not competing his butt off?âÄù Stoudermire, a true freshman out of Dallas Skyline High School , averaged 31.4 yards on nine kick returns. After a 58-yard return that he almost took to the house, Stoudermire slammed the ball to the turf, clearly frustrated he wasnâÄôt able to beat the last man. âÄúI told him I love him after the game,âÄù Brewster said, âÄúbecause he was fighting and scratching âÄòtil the last snap of that game.âÄù Greene sets Iowa rushing mark Iowa running back Shonn Greene epitomizes the unpredictability of college football. He emerged seemingly out of nowhere this season and is now being mentioned in the race for the Heisman Trophy. His 144 rushing yards and two touchdowns on 22 carries Saturday not only helped his Heisman stock but vaulted him into some elite company at Iowa and in the nation. Greene broke the single season school rushing record, and now has 1,729 yards; two scores on the ground gave him 17 on the year, and he sits level with Tavian Banks for IowaâÄôs single season rushing touchdown mark. Nationally, Greene ranks second in rushing yards per game, but is the only player to rush for 100-plus yards in every game this season. After the game, Brewster couldnâÄôt do much but state the obvious: âÄúShonn Greene is a heck of a back.âÄù Three QBs take snaps for Gophers With Adam Weber struggling to find any rhythm and Minnesota in a 55-0 hole, backup quarterbacks Mike Maciejowski and Tony Mortensen each took a few snaps. MaciejowskiâÄôs biggest role this season was on a two-point conversion attempt against Ohio State, which he converted with a completion to junior wide receiver Eric Decker. Saturday, he attempted a single pass, which fell incomplete, but rushed twice for 13 yards. Sadly, he was the Gophers leading rusher on the day. Mortensen took a snap in a game for the third time this season, but attempted his first pass Saturday, which fell incomplete. He rushed once for 2 yards, as well.