Minnesota recorded its eighth sweep of its season. 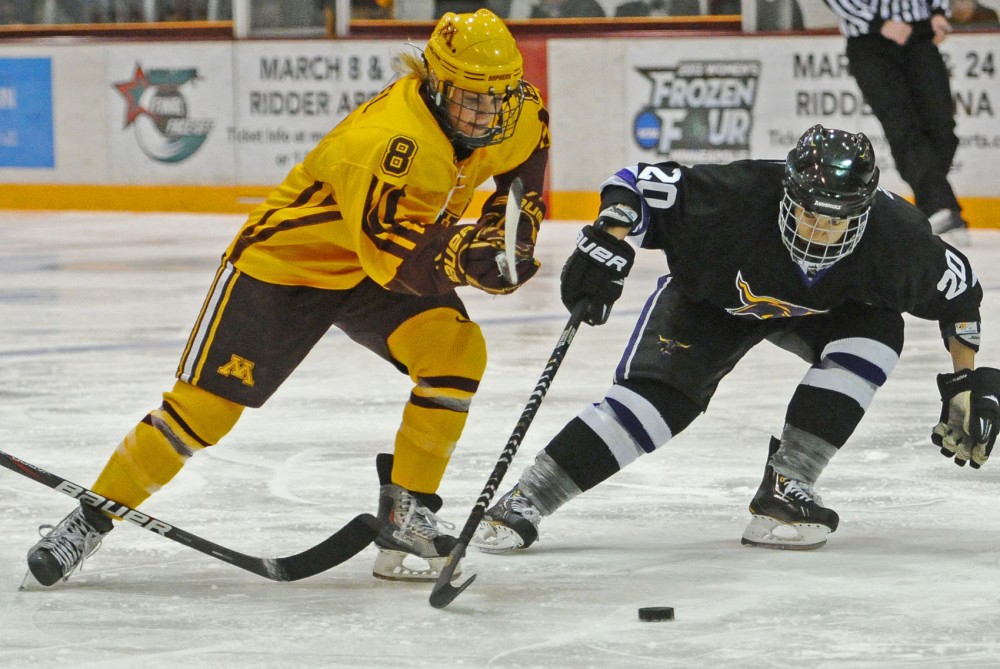 But it walked away with the same result, beating New Hampshire 4-0 to extend its winning streak to 24 games.

Sunday’s win capped Minnesota’s eighth sweep of the season and moved the No. 1 team in the country to 16-0-0.

It was also the Gophers’ 15th-straight road win, which ties an NCAA record.

“I think yesterday was maybe a little bit of a wake up call [for New Hampshire],” junior forward Amanda Kessel said Sunday. “Any team is going to come back harder the next day.”

Kessel said New Hampshire put more pressure on the Gophers and played well with its system.

“I think they just had to adjust to the speed of the game and the pressure we were able to apply,” Frost said.

Freshmen forwards Maryanne Menefee and Brook Garzone sat out this weekend for the Gophers, who dressed only 11 forwards.

Frost said the two had violated team rules and were “trying to figure some things out academically.”

But the team had enough depth to overcome the absences.

“Obviously it’s never good to have forwards out, but we have such a good team that anyone can step up,” Kessel said. “We had some players do that.”

Freshman defenseman Lee Stecklein scored a goal on the power play Sunday to give Minnesota a lead about halfway through the first period.

It was Stecklein’s second collegiate goal. Her first came Saturday, also on the power play, after Kessel delivered a backdoor pass to her.

“She’s been setting me up for a while,” Stecklein said of Kessel, “but I haven’t quite managed to put one in. So it’s really exciting to finish it this time.”

On Sunday, McMillen scored one of the Gophers’ two second-period goals. Sophomore forward Rachael Bona had the other goal. Minnesota outshot New Hampshire 14-3 in the period.

She also leads the NCAA with 45 points.

Kessel and freshman forward Hannah Brandt had been tied for the NCAA lead in points, but for the first time in her collegiate career, Brandt didn’t record a point Sunday.

Both Brandt and Kessel had five points in Minnesota’s win Saturday, when seven players scored for the Gophers.

Brandt recorded her second-career hat trick and had two assists.

One of the assists came on Kessel’s first goal of the game, an early two-on-one opportunity for the Gophers at the 2:19 mark.

Kessel said she thought the early goal “knocked the goalie’s confidence down” and gave the Gophers more confidence.

Brandt followed with a goal at the 4:42 mark, and Stecklein said she thought getting two quick goals may have set New Hampshire back.

New Hampshire switched goalies immediately after Brandt’s first goal. It played three goalies in the game, but none were particularly successful.

Kessel had two goals and three assists in the win. In the second period, she skated along the right boards and passed through to Lorence at center ice, who found the back of the net in one of the weekend’s better plays.

Lorence played on the top line all weekend in place of Menefee.

Kessel said she thought Lorence played well and the line worked well in the series.

“It just shows that anyone can play anywhere,” Kessel said, “and that we have people [that] can step in and fill a role that they haven’t been playing all year.”

Minnesota faces a tougher test next weekend at home against Wisconsin, the team it beat in the national championship game last season.