The College of Design’s fashion show was held in the Weisman Art Museum’s Davis Gallery on April 19. 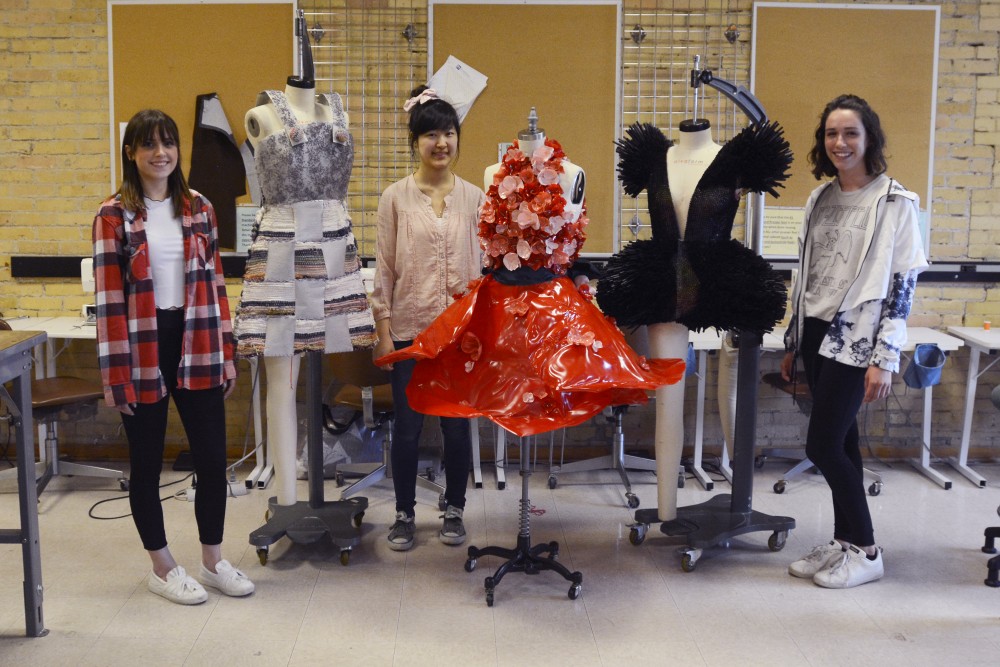 Apparel design sophomores Hailey Strobel, left, Stephanie Wang, center, and Karli Rastetter, right, pose for a portrait with their pieces at their studio in McNeal Hall on Tuesday, April 18, 2017. Their work will be showcased in IMPRINTS at the Weisman Art Center on Wednesday, April 19, 2017.

For future event planners, museum curators and fashion designers, an in-house fashion show at the Weisman Art Museum is somewhat of a dream.

For University of Minnesota students, design showcase “IMPRINTS” provides that opportunity for many of on-campus creatives.

This year’s show, a collaboration between the University’s College of Design and the WAM, took place Wednesday. The show is an annual rite of passage for second-year design students,

For University strategic communications senior Meg Kelly, planning such an event is the culmination of four years of work with the WAM Collective, the museum’s student outreach group.

“Helping with the design showcase is my favorite event because it’s such a cool collaboration on campus,” Kelly said.

Despite the show’s six year run, the Weisman welcomes yearly changes to the event in order to keep it fresh.

This year, the showcase moved out of the Riverview Gallery to a sold-out show in the Davis Gallery, allowing the audience to better connect with “The Talking Cure” and “What Needs to Be Said?” — exhibits at the Weisman that inspired the student designers’ work.

Featured second-year design students, like Stephanie Wang and Lizzy Cobb, were challenged to create a garment that spoke to their identity through the use of upcycled, non-traditional materials.

Wang’s design features a skirt and a shirt with flowers and string lights reminiscent of a candle.

“The top part, the flowers, are all made of water bottles that I fished out of the recycling,” Wang said. “I applied heat with a candle to curl the edges in so they look more like petals, and spray painted them.”

Wang drew her inspiration from her own personality and interactions with her friends and family.

“I’m more of a listener than a talker,” Wang said. “My mom mentioned an old Chinese saying … ‘A candle gives light to others, and in the process it sacrifices itself.’ … It kind of signifies time passing as someone is talking to you, and then me taking what I hear and listening to it and absorbing it. Or I could reflect it back to them in the form of advice.”

Cobb, on the other hand, designed a long dress with 1000 painted leaves and an encaged bodice built out of wire tree branches.

“I grew up in the same house, and in the back yard was this big, 200-year-old oak tree,” Cobb said. “When my father passed away in 2012, it was this stable object for me … It was something that I felt like never changed when everything around me was changing.”

Cobb’s integration of non-traditional materials was inspired by an object integral to her coping process.

“I painted pages of a book that were cut out in a leaf,” Cobb said. “This book [‘Don’t Sweat the Small Stuff’] really helped me in my journey of grief. I painted the pages so they gradate to go through the seasons.”

The success of the showcase rests on collaboration, as well as the help of countless planners and backstage helpers.

For seniors like Kelly, “IMPRINTS” is the capstone of a career with the Weisman. But for any budding Marc Jacobs or Diane von Furstenberg in the College of Design, it’s just the beginning.