The Board of Regents will review the plan for the first time next week. 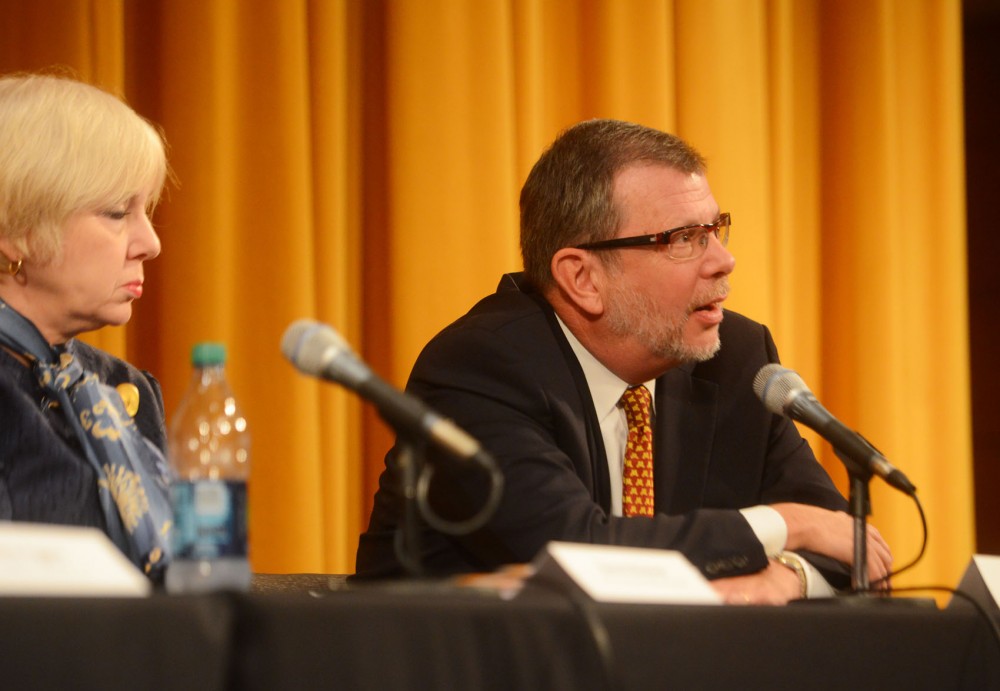 Senior Vice President for Academic Affairs and Provost Karen Hanson and University President Eric Kaler answers a question from the audience Wednesday afternoon at the Humphrey School of Public Affairs. Administrators held the meeting to discuss the strategic plan draft, which they will present to the Board of Regents next week.

After a year of discussions, the University of Minnesota’s strategic plan is nearly finished.

The proposal — which includes objectives like increasing interdisciplinary work and jumpstarting diversity initiatives — went through one of its final rounds of feedback on Wednesday.

Nearly 100 people gathered in the West Bank’s Cowles Auditorium on Wednesday night to hear the plan and pose questions to administrators, including President Eric Kaler. Many attendees expressed excitement for the plan, and some offered suggestions as officials work to finish the final draft.

If all goes well, administrators will launch the plan next academic year. The Board of Regents will review the document next week before its final vote for approval in October, and members of the University community can comment on the plan from Sept. 15-25.

The plan includes specific goals like decreasing the amount of time staff and faculty members spend in meetings by 25 percent. Officials also discussed expanding the University’s liberal education requirements to include curricula on solving large, societal issues, which they call “grand challenges.”

Although administrators say the plan will guide the Twin Cities campus for the next 10 years, it will also outline specific steps they will take in the next three to five years.

But Joe Konstan, a computer science and engineering professor who is helping draft the proposal, said at the meeting that sweeping changes won’t come right away. Officials want to slowly build on what the institution is already doing, he said.

To fund the initiatives, University administrators will tap into the recent $15 million cut in administrative spending, Kaler said at the meeting. The cut was part of his plan to slash $90 million in administrative overhead by 2019. Donations and state funding will also finance the plan, he said.

Officials could start working the “grand challenges” curriculum into liberal education requirements through a pilot program for honors students or a seminar for graduate teaching assistants, said Renee Cheng, professor and head of the School of Architecture and co-chair of one of the issue teams, at an August meeting.

Some students also expressed support for the proposed plan. Sociology senior Christian Glanville, one of the few students in attendance Wednesday, said he was pleased that the plan calls for more interdisciplinary work. That type of study, he said, often addresses the global issues the University wants to tackle.

The proposal also highlights areas in which the University could increase diversity.

Susannah Smith, managing director of the University’s Institute for Advanced Study, said she would like the strategic plan to prioritize recruiting minority faculty members.

“What I hear when people talk about what worries them a lot about the University,” she said, “is the University of Minnesota has had some spectacular losses of faculty of color.”