Gophers use late charge to pull away from Jackrabbits

Minnesota had 11 turnovers in the first half and lost the rebounding battle, but they wouldn't let South Dakota State steal a win at Williams Arena. 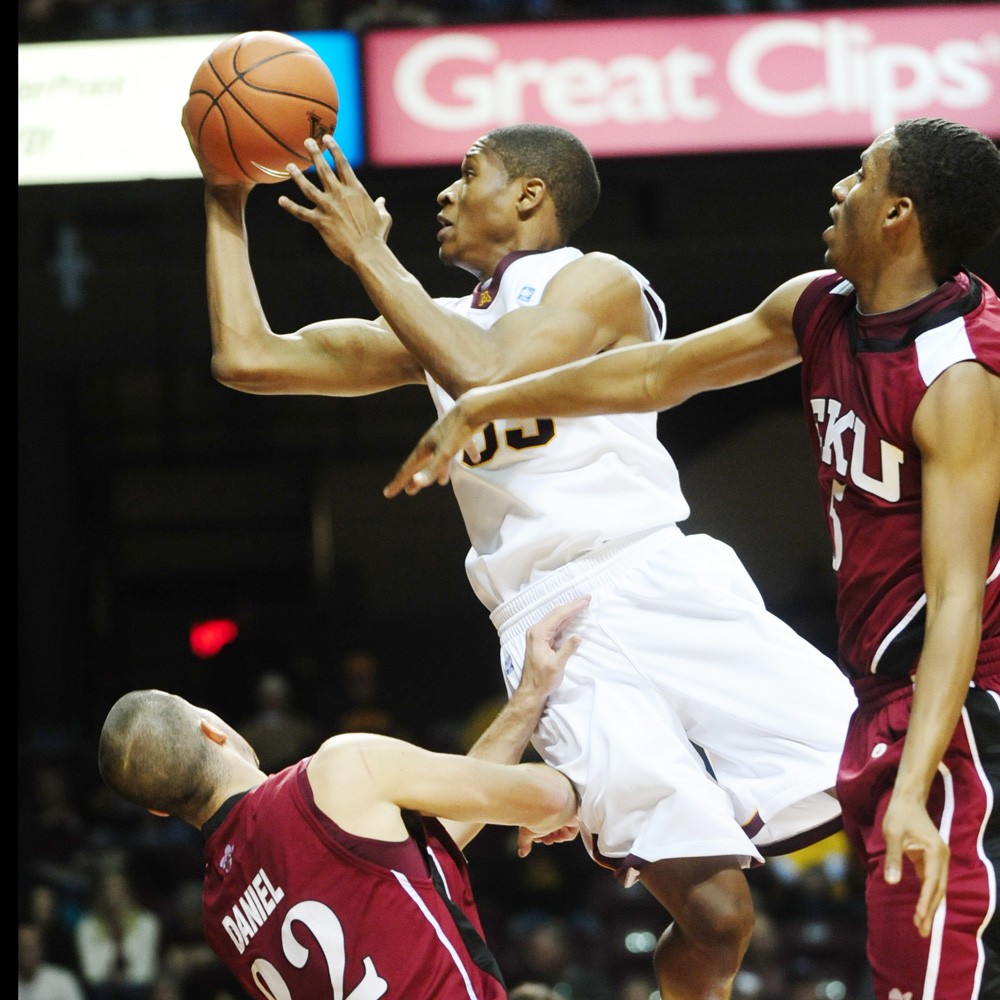 Before the Minnesota menâÄôs basketball game against South Dakota State Thursday, coach Tubby Smith said he didnâÄôt think the Gophers needed a blowout victory heading into Big Ten play.
He just wanted his team to play its best, so the players would have enough confidence in their Big Ten opener, a Dec. 28 contest at Wisconsin.
An 85-73 victory over South Dakota State may look like a small blowout for the Gophers, but they didnâÄôt play close to their best in their nonconference finale at Williams Arena. With the score tied at 64-64 with just 6:30 left, the Gophers used a 9-0 run to pull away from a Jackrabbits team that flustered them all night.
âÄúThis should probably prepare us as well as any game,âÄù Smith said. âÄúThis is the type of game that will expose some of your weaknesses but also teach our players how to be patient.âÄù
Still, if Minnesota starts like it did Thursday in a Big Ten game, the Gophers could face an insurmountable deficit before they know it.
The shorter Jackrabbits (no starters taller than 6-foot-8) won the rebounding battle 19-18 in the first half and forced 11 turnovers. The Gophers were fortunate South Dakota State only managed two points off those turnovers with a 33.3 percent shooting effort, allowing Minnesota to take a 34-29 lead at the break.
âÄúI wouldnâÄôt call it a sloppy start,âÄù guard Devoe Joseph said. âÄúWe just werenâÄôt as efficient as we shouldâÄôve been.âÄù
Eventually, the Gophers wore down the Jackrabbits inside thanks to a great effort by Colton Iverson off the bench. The junior forward scored 15 points and grabbed five rebounds to carry the team in the second half.
âÄúColton really came in there and gave us a lot of energy,âÄù said Al Nolen, who played 23 minutes in his first game since Nov. 24. âÄúGood rebounds, big baskets down the stretch. He really stepped up today.âÄù
Iverson played 26 minutes and had to fill in more after freshman Mo Walker went down with what Smith called a âÄúsignificant injury.âÄù Walker was on the floor grabbing his right knee early in the second half and had to be helped off the court. He will have an MRI on Monday.
Joseph added 15 points for the Gophers, and Rodney Williams continued his impressive play, scoring 13 points on 6-for-7 shooting. As a team, the Gophers shot 52.5 percent, but it almost wasnâÄôt enough to mask other problems.
The Gophers hit only 61.5 percent of their free throws, including a 1-for-6 effort by Williams. And even with guard Nolen returning from injury, they struggled to contain the JackrabbitsâÄô shooters as Clint Sargent scored a game-high 23 points and St. Cloud native Nate Wolters added 16 points and 10 assists.
Minnesota also had to overcome poor offensive performances by Blake Hoffarber and Trevor Mbakwe, their two most consistent players thus far in the season. Hoffarber scored only four points on 1-for-4 shooting, but added a team-high six assists. Mbakwe, meanwhile, scored only eight points as he dealt with foul trouble for much of the game.
But Nolen helped provide a calming influence, Joseph said, and the Gophers proved to be unflappable in the end.
âÄúYou can just see when heâÄôs out there our intensity steps up,âÄù Joseph said of Nolen, who admitted to not being 100 percent. âÄúHe made a couple plays there where heâÄôs going out of bounds saving the ball, just great defensive plays and even on the offensive end just running the team real well.âÄù