The grass of a forgotten war grows close to home 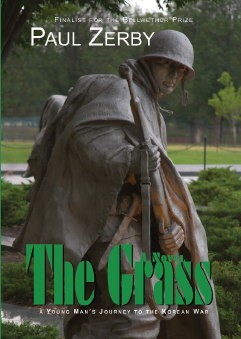 Who: Paul Zerby What: Discussion of âÄúThe GrassâÄù Where: University of Minnesota Bookstore, Coffman Union When: Wed., April 8, 4 p.m. âÄúIt felt like a jolt of electricity when it hit me, but not harmful, exciting. The President of the University of Minnesota was arguing with me, or more accurately telling me what I could or couldnâÄôt say âÄ¦ We wonâÄôt sit down and shut up and we wonâÄôt let this happen!âÄù Standing at the podium, author Paul Zerby read this excerpt aloud in the voice of Tom Kelly, a character from his recently published book âÄúThe Grass.âÄù He was visiting Open Book, MinnesotaâÄôs center for book arts, last Friday to speak, sign and discuss the book. In âÄúThe Grass,âÄù Zerby tells the story of the young Duluthian Tom Kelly, who is forced to leave the University in the early 1950s for his defense of his Korean-war-opposing professor âÄúProf WilliamsâÄù who also happens to be the only black faculty member on campus. After leaving the University, Kelly enlists and finds himself being shipped out to fight in the Korean War, where he is confronted by an even more complicated world of racism and intolerance. Paul Zerby graduated from the University of Minnesota before joining the army himself in 1953 and serving in Korea . He also served as a member in the Minneapolis City Council for some years. Much of âÄúThe GrassâÄù is taken from ZerbyâÄôs direct experience of the events that he lived through. As he reads Tom KellyâÄôs speech to President Werrecker, it is easy to get the feeling of the first-person authenticity with which the entire book is written. The portrait that Zerby paints of the University is one that may contain parts both familiar and unfamiliar to current students. When Tom Kelly describes the âÄúbroad, tree shaded mall that stretched to the front steps of Northrop Auditorium âÄù for example or the âÄúhard-bitten student journalistsâÄù of The Minnesota Daily, gopher readers are sure to feel a warmth of recognition. However, the most striking difference in âÄúThe GrassâÄù comes in the way in which blatant discrimination, especially discrimination of race, is portrayed. In his book, Zerby lays bare the prejudices of society at the time. âÄúIt was different,âÄù said Zerby. âÄúThe bigotry was so raw back in the day.âÄù It is hard to believe at times how raw that racism really could be, but in reality the experiences that the character Kelly has at the University are not far from what was actually going on. The story of Prof Williams closely follows that of philosophy professor Forrest O. Wiggins, who was dismissed from the University in 1952 in similar morally murky circumstances. Wiggins was the first black professor at the University of Minnesota. He was very popular among students, but his socialist views made waves in the University. He was denied tenure by the Board of Regents in a way the ACLU described at the time showed that he had âÄúnot received full justice .âÄù âÄúThe GrassâÄù was a finalist for the Bellwether Prize , which is awarded biannually to books addressing issues of social justice , which is no surprise given its intense and deep look into the tense situation at the time of the Korean War as it played out in many different areas from small-town Fargo and all the way to Korea. We might have changed the way discrimination is treated in the past 50 years since the Korean War, but it has certainly not completely gone away. âÄúThe GrassâÄôsâÄù themes of social change and questioning the system still ring true today in a powerful way, especially against the lessons learned from a setting so close to home.