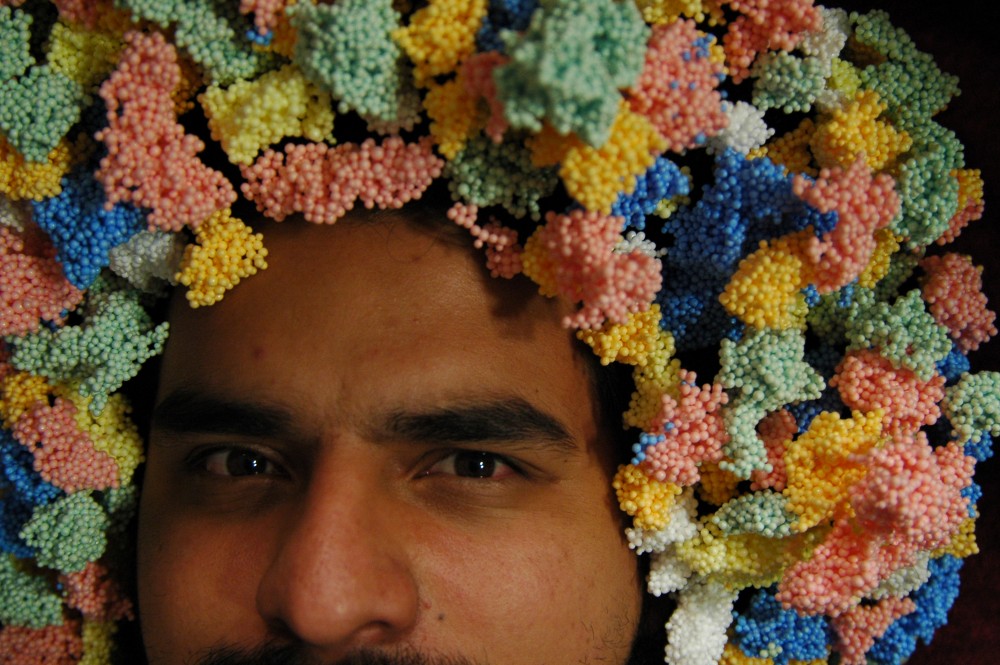 Lange’s album art and promo photos were taken by Sword, who he calls “a special lady” in his life. PHOTO COURTESY KRISTI SWORD/ASTHMATIC KITTY RECORDS

Helado Negro ALBUM: âÄúAwe OweâÄù LABEL: Asthmatic Kitty ThereâÄôs always a lot of word-play when Helado Negro is involved. The first thing people think is, âÄúWhat is helado negro?âÄù Upon finding out that it means âÄúblack ice cream,âÄù they think, âÄúWhatâÄôs black ice cream?âÄù Turns out itâÄôs raspberry ice cream, but then, what does his album title âÄúAwe OweâÄù mean? A&E tried to answer these and many more questions about Helado Negro, AKA Roberto Carlos Lange. The son of Ecuadorian immigrants , he began producing his own music in his Florida home and Brooklyn apartment, his diverse background serving as his launch pad into various projects and collaborations. His album as Helado Negro is complex, melodic folk with quirky production touches and layered harmonies that make it sound like early Sufjan Stevens or the experimental days of Grizzly Bear. Lange called A&E to talk about hip-hop, partying and the Germanic origin of the last name Lange. What does your album title mean? [To be] in awe of something and just caught in that state and it kind of told the story [about] a lot of the record, what I did, things I was just impressed with, experiences that I was impressed with. And âÄúoweâÄù is just the concept of humbleness and remembering I owe other people my life. I could say maybe some of it is like a subconscious inspiration from my friend David that I work with. He used a lot of letters when he worked in a visual work, like murals on the street. In a way, a lot of graffiti writers truncate words to make them shorter words. You got to put your idea across. In a way I take from that too, getting an idea across in the simplest means, using the things I have around me. That was the biggest thing about this album: doing what I can with what I got âÄî my ambitions, and to inspire as many people as I can. You have many projects, including the hip-hop oriented Epstein. Do you rap? I never emceed on any of that stuff. A lot of them are just friends or people associated the label, Arepaz . No I donâÄôt rap. ItâÄôs more hip-hop based, only because a lot of that was birthed with me getting my MPC for the first time and buying records, being like, âÄúOh sh-t, this is boogy down production.âÄù Is your record primarily organic instruments or a mixture of samples? ItâÄôs not 100 percent samples. I think sampling is a part of our culture. Sampling is an art form. People disregard it, âÄúYouâÄôre not playing instruments.âÄù What if I didnâÄôt have arms or legs, and I made this music? People would be like, âÄúHeâÄôs a genius.âÄù People get so bent out of shape about things being non-musical, but samples can still be informative musically. I know IâÄôm kind of repeating something someoneâÄôs already said a million times in a million interviews in the 20-30 years of hip-hop. ItâÄôs a part of me and it crossed over to my music. What was your musical education like? I read that your hard partying parents were influences. My parents always had music in the house and parties on the weekends. A lot of times during the early part of the party, 9-3, there were a lot of people just dancing conga, merengue âÄî typical Latin American music. I think for a lot of times, late night it would roll into folk sing-alongs, where everybodyâÄôs had a few drinks, and they would go late in the morning, singing and playing guitar or whatever instruments youâÄôd bring. My mom would go to sleep around 2 or 3. They would have karaoke machines and record themselves I think that gave me an interest for things like that. I started recording myself, kind of mimicking. I played guitar in middle school because my uncle gave me a Spanish guitar. Later I went to an art school. I was always growing up peripheral to that whole culture of Ecuadorian influences. I was also inspired by electronic music and hip-hop. Those two things have always been the biggest. In high school I wanted to make beats. I had a friend who was an emcee so I made beats. In college I bought an MPC sampler sequencer, and IâÄôd sample, make a beat send it to my friends. You studied art in college. Do you like working with visual artists, or is your music influenced by visual art? ItâÄôs not so much that it influences it, but itâÄôs just that together we make a better whole. Sometimes things just come out of you that move people and theyâÄôre the most important things to focus on. Me working with someone else does something naturally that affects people visually. Together we make this âÄúsuper thing.âÄù I think it just keeps building from there. People need to keep coming together with other people to see what we can make together, to make something bigger.