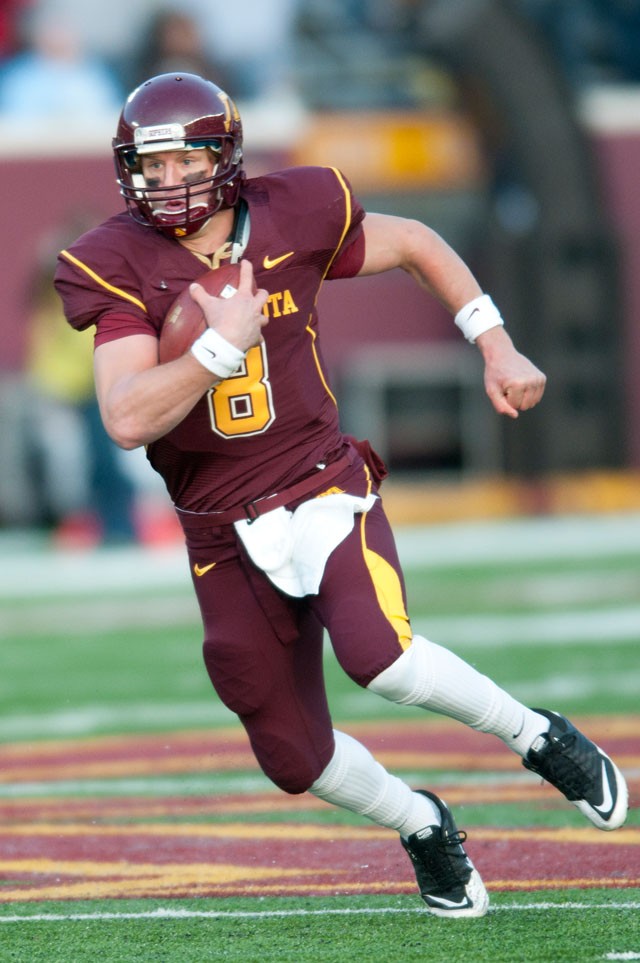 What was an implausible celebration Saturday quickly became a harsh reality for at least 26 people connected to MinnesotaâÄôs football program.

The 15 seniors played the final game of their careers against Iowa, and the 11 coaches likely face unemployment since the likelihood they will remain with the team when a new head coach is announced is far worse than the odds the Gophers overcame by defeating the Hawkeyes, 27-24.

Still, the seniors could think of no better way to say goodbye to their football home of four or five years, and the coaches can rest somewhat easier knowing that the players who remain ended this season on a good note.

âÄúItâÄôs kind of bittersweet,âÄù said senior quarterback Adam Weber, who made his 50th and final start in SaturdayâÄôs win. âÄúSitting in that locker room everybodyâÄôs celebrating, but then I realized I have to take off my pads for the last time. ItâÄôs very bittersweet, but I love seeing my team celebrate, have that pig and knowing that all these guys that are coming back next year.

âÄúEvery time they walk by that complex theyâÄôll have that pig in that trophy room, and that means a lot.âÄù

Weber might humbly say the victory was for a program that struggled through a nine-game losing streak and the firing of head coach Tim Brewster on Oct. 17, but the other players know this win was for the seniors, sending them off with Floyd of Rosedale.

âÄúThe motivation was to leave the seniors with a great win and something thatâÄôll last as they pursue their life after football,âÄù junior running back Duane Bennett said after he helped the Gophers rush for 216 yards, many of which came after shedding tacklers. âÄúJust knowing that the seniors had done everything for us for four or five years, for them to be able to leave with something like this, I think itâÄôs just big for us.âÄù

ItâÄôs especially big for Weber, who had never won a trophy game in his four seasons as a starter. The quarterback will leave Minnesota holding school records in passing yards, completions and touchdowns, but the harshest critics will say those statistics only came about because he played 50 games.

Bennett said anyone who spent a week watching the three-year captain prepare his team for battle would see that heâÄôs more than just a statistical machine. Now, though, he can leave with a real legacy in hand.

âÄúFor him to be able to win a home game as well as a rivalry game to seal up his legacy, I think itâÄôs great for him,âÄù Bennett said. âÄúAfter having all these accolades and a lot of people getting down on him about different stats and everything, itâÄôs one thing thatâÄôll be remembered more so than maybe his games that werenâÄôt played so well.âÄù

Weber and other seniors will now pursue whatever chances they may have of making the NFL until AprilâÄôs draft.

As for the coaches, they will continue with business as usual âÄî as they did following BrewsterâÄôs dismissal âÄî until the new coach is named. Interim head coach Jeff Horton said he plans to hold brief meetings at the football complex with all of the players to discuss how to improve before next season.

âÄúDepending on the coaching hire, until they name one, IâÄôm going to be there each day,âÄù Horton said. âÄúWe kind of have a schedule for the coaches to come in âÄ¦ When the moment comes, when we canâÄôt get through the door any more, like I said, that Amtrak trainâÄôs right around the corner, so IâÄôm going to get on it.âÄù

Winning the final two games certainly helps HortonâÄôs case to stick around. Whether thatâÄôs as head coach or an assistant, Horton said heâÄôd like to stay.

Sophomore MarQueis Gray certainly wouldnâÄôt mind the idea of keeping the coach who helped him gain valuable experience as a quarterback in the latter stages of the season, saying, âÄúIf heâÄôs here, thatâÄôs fine with me.âÄù

But Horton and the other coaches know that their staying with the program is just as unlikely as any of the seniors being drafted in April, with one or two staying likely the maximum.

Luckily for both, SaturdayâÄôs win over the Hawkeyes will give them something to cherish from their time at Minnesota, however abrupt the ending might feel.

âÄúYouâÄôre disappointed the way it went but then to finish like this,âÄù Horton said, âÄúthat makes it to me all worthwhile.âÄù