U community speaks out against Syria intervention 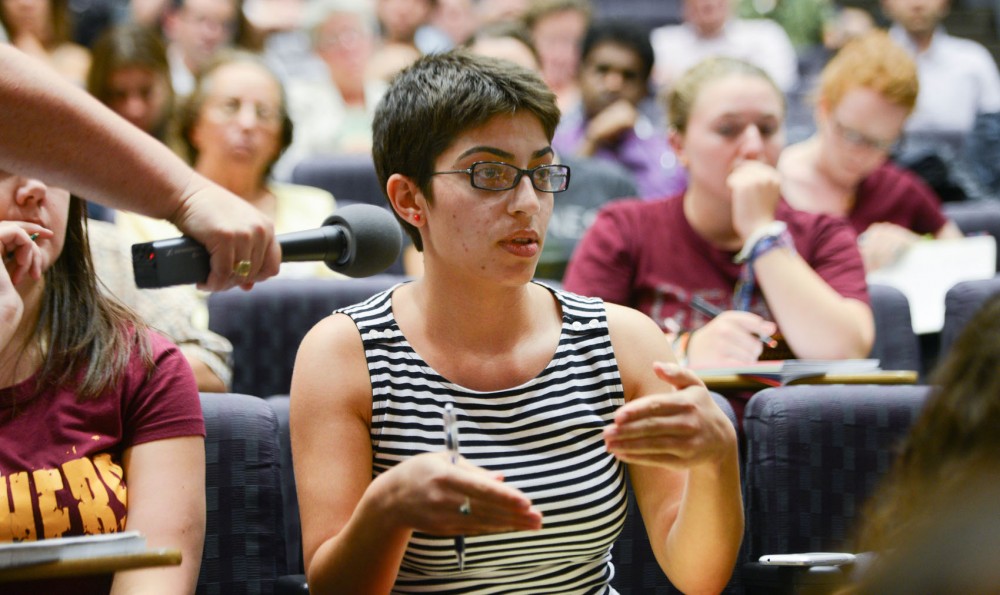 Junior Salma Taleb asks the panel a question at "Countering Mass Atrocities in Syria: Between Human Rights Ideals and Geo-Political Concerns" at Wiley Hall on Wednesday afternoon. The panel held a discussion on what consequences U.S. interference in Syria would bring.

As global leaders continue to weigh action in Syria, University of Minnesota professors and students are adding their voices to the debate.

This week, discussion shifted from military action to diplomacy as Russia and the U.S. agreed to a plan to strip Syria of its chemical weapons. But military intervention is not off the table.

Despite uncertainty about the U.S.’s course of action, University community members vocally oppose intervening on the country’s three-year civil war.

Nearly 100 community members, including University students, attended a protest on the corner of Hiawatha Avenue and Lake Street on Saturday to speak out against U.S. military intervention in Syria.

“It’s an excuse for the U.S. to do something that advances its geopolitical and economic interests,” said University American studies graduate student Matt Boynton, who attended the protest. “It’s not about the human rights of the Syrian people.”

Boynton is a member of the Students for a Democratic Society ’s University chapter, which has participated in three anti-war protests this month.

University communication studies junior Salma Taleb, who moved from Syria five years ago and has experienced war firsthand, said the U.S. should not intervene because she thinks it’s not beneficial to the U.S. nor to the Syrian people. She said she thinks the Syrian people do not consider a military intervention to be liberation, but rather something that would further complicate the situation.

“I believe there are many other humanitarian ways in which the U.S. could help the Syrian people,” she said.

According to a recent agreement between the U.S. and Russia, all of the chemical weapons in Syria must be destroyed or removed by the middle of next year. If Syria doesn’t turn over its chemical weapons, U.S. Secretary of State John Kerry said forceful action will be taken.

University political science professor Ronald Krebs said at a roundtable discussion on the West Bank last Wednesday  he’s skeptical of removing chemical weapons from Syria because they may land in hands of rebel or terrorist groups.

Krebs, who specializes in international security and counterterrorism, said seizing the weapons would take a considerable amount of time and planning.

All of Syria’s chemical weapons must be inventoried by the end of this week. Even with the recent agreement — which hasn’t been officially accepted by Syria — military strikes are still on the table.

Ragui Assaad, a professor at the Humphrey School of Public Affairs, said at the roundtable discussion that the U.S. is in a “no-win situation” with Syria.

Sarah Parkinson, an assistant professor at the Humphrey School, said U.S. leaders are overestimating the argument that a military strike will benefit civilians.

“American policymakers are far overstating the work that a strike will do for American credibility, but also for human rights,” she said.