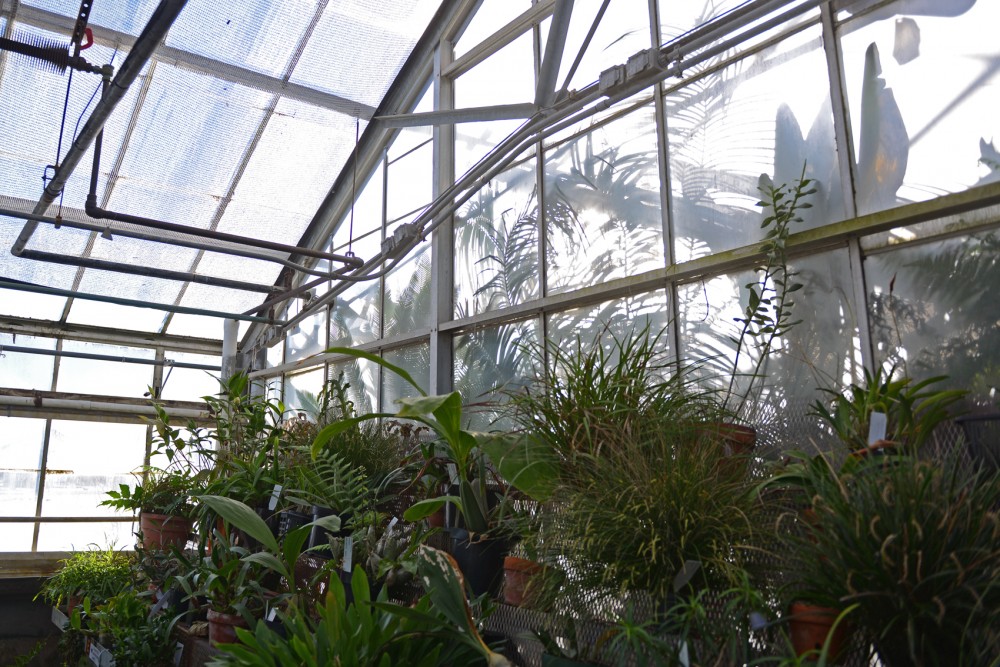 Plants grow within the CBS Conservatory on Tuesday. Located on the St. Paul Campus, the greenhouses contain plants from all across the globe.

by Eliana Schreiber
The University of Minnesota can credit oak, maple and pine trees for its picturesque collegiate landscape, but Venus flytraps and chocolate trees make up some of St. Paul campus’ more curious scenery.
Even during Minnesota’s frigid subzero winters, the College of Biological Sciences Conservatory houses about 2,000 diverse and rare plants  that hail from tropical and arid climates alike.
But the greenhouse is more than 40 years old and one of the oldest on campus. Many conservatory employees hope the state Legislature will approve funding this spring that could help build a new facility — something the University has asked the state for since 2000.
After 16 years, the greenhouse has continued to deteriorate, although the biodiversity it houses hasn’t stopped drawing crowds.
Last month, the conservatory entered seven of its plants in the Marjorie McNeely Conservatory Winter Carnival Orchid Show, said conservatory volunteer Chas Huston.
Out of 500 orchids in 90 different classes, the conservatory won two first-place prizes and five silver and bronze awards.
Judges use photos from the past 25 years to compare the number of flowers each plant produces, Huston said. They also give out cultural awards, which judge the environment that plant was grown in, he said.
“This [award] says we know how to grow plants carefully,” Houston said, adding that honors like the ones it received in January helps draw attention to the conservatory.
This week, when the site’s corpse flower bloomed for the first time in seven years, the conservatory saw another wave of crowds eager to discover the greenhouse, said Senior Laboratory Technician Ric Roderick.
He said most of the people who visited over the past week had never heard of the conservatory before the corpse flower. But when they came across the array of other delicate and exotic plants contained in the greenhouses, they promised to be back soon, he said.
The greenhouse is divided up into different rooms by category of plants, depending on the temperatures and humidity they require to thrive, said John Benning, a graduate student in plant biology who volunteers at the conservatory.
Roderick said the conservatory wants to get a QR code system set up for the conservatory so people can read about the plants by scanning the codes on their smart phones.
“So many plants have interesting stories,” Roderick said. “I’ve suggested it before, but like a lot of things, things move very slowly because there’s not the money for it.”
Delete Image
Align Left
Align Center
Align Right
Align Left
Align Center
Delete Heading