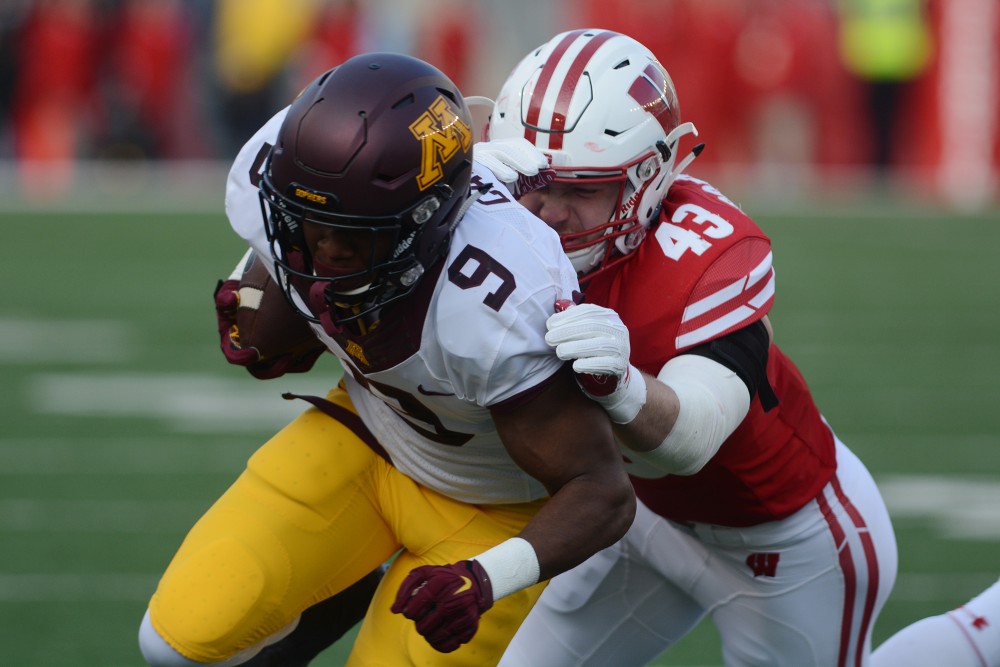 The Gophers (8-4, 5-4 Big Ten) play Washington State (8-4, 7-2 Pac-12) in the Holiday Bowl in an attempt to move on after a brief boycott of the game earlier this month. A full breakdown, prediction and other notes can be found below.

Minnesota’s ground game was by far the best part of its offense in 2016. Running back Rodney Smith had 15 rushing touchdowns in 12 games, while quarterback Mitch Leidner had 10 and running back Shannon Brooks had five. The team’s rushing offense averaged 186.4 yards a game, good for fifth in the Big Ten.

Toward the end of the season, Smith and the Gophers’ rushing offense fell off. In his last three games, Smith averaged 43.3 yards a game as he began to face harder rushing defenses.

It may not get easier for Smith and the rest of Minnesota’s ground game against Washington State. The Cougars’ rushing defense finished third in the Pac-12, but did allow over 100 yards in all but three games this year. The final game of the season will be a good assessment of Minnesota’s rushing offense against an above average rushing defense.

When Washington State runs the ball:

Three running backs had over 80 carries for Washington State this season, so Minnesota won’t be able to focus on just one player. Running backs James Williams, Jamal Morrow and Gerard Wicks all saw significant playing time this season. Williams averaged the most carries a game, Morrow had the most yards per attempt and Wicks led the pack in touchdowns with 12.

Even with three talented running backs, the Cougars’ rushing offense had the second worst yards per game in the Pac-12 this year, as Washington State throws the ball an average of 51 times a game versus running it just 28 times.

Minnesota’s rushing defense was mostly unaffected by the ten suspensions as no linebackers or defensive linemen who saw playing time were part of the group. The Gophers’ ground defense was among the best in the Big Ten, finishing fourth with only 124.4 yards allowed a game. Opponents only scored 12 rushing touchdowns against them.

Minnesota’s passing offense was below average this year and ended the regular season with a horrible game against Wisconsin. Leidner only completed 34.6 percent of his passes and threw four interceptions.

Leidner’s last season wasn’t great for the Gophers, but Minnesota did run the ball a lot more than it had last year. His wide receiver options were limited, as senior Drew Wolitarsky was the only wide receiver who had more than 20 receptions this season. Leidner finished with the lowest quarterback rating and passing touchdowns in the Big Ten among qualified players.

Washington State’s passing defense was toward the bottom of the Pac-12 in yards allowed per game and quarterback rating, and the group had a 19-12 TD-INT ratio. The Cougars allowed over 300 passing yards in five games this year, but Minnesota’s passing offense has been so bad that Washington State still holds a slight edge here.

When Washington State passes the ball:

Washington State’s biggest advantage is here for a number of reasons. Its quarterback, Luke Falk, is one of the best in the Pac-12 and the country. He had the fourth most passing yards per game in the FBS and finished with the sixth most passing touchdowns. He could very well start in the NFL one day.

Minnesota’s passing defense has had a down year. The Gophers allowed the second most yards a game in the Big Ten and only had eight interceptions. But now, most of their secondary was taken away. Minnesota’s depth at cornerback and safety is non-existent as Ray Buford, KiAnte Hardin, Antonio Shenault and Antoine Winfield Jr. – four of the 10 suspended players – were all major keys. The Gophers’ passing defense is incredibly vulnerable.

Falk once passed for 480 yards against Boise State this season. He could go over that in this game. This is the biggest advantage a team has had over Minnesota this year.

Luke Falk and Washington State’s passing offense will be too much for Minnesota. The Gophers end December with major off-the-field issues and a big bowl loss.

Around the web on the Gophers’ boycott:

-The Gophers’ decision to boycott the Holiday Bowl garnered national attention. A lot of fantastic writing came from it. Here’s a list of a few of my favorite pieces that really stuck out.

1. U football crisis: Train wreck of a privacy law made matters worse

-From Frank LoMonte of the Student Press Law Center. Great explainer on the problems with FERPA.

-From Sarah Horner of the Pioneer Press. This piece was absolutely crucial for understanding the information in the EOAA report.

3. Minnesota football players have chosen the wrong issue on which to make a stand

-From Sally Jenkins of the Washington Post. Well-penned opinion.

-From Joe Christensen of the Star Tribune. An article inside the decision by the football team to abandon the boycott.

5. Only on AP: As Minn. waffled, NIU prepped for Holiday Bowl

-From Ralph D. Russo of the Associated Press. This is what Northern Illinois, the next team up, was doing while Minnesota was in the middle of its boycott.

6. The ‘Brutal Solidarity’ of the Minnesota Gophers

-From Dave Zirin of The Nation. Good, short column with reaction from Minnesota’s student body president, an adjunct professor at the U and the author of “From Black Lives Matter to Black Liberation”.

7. Minnesota Football’s Boycott Was Wrong in Every Way

-From Rodger Sherman of The Ringer. Another good opinion piece.

The Minnesota Daily’s coverage of the football team’s boycott:

-The ten football players were suspended on Dec. 13, the boycott was announced on Dec. 15 and it was lifted on Dec. 17, here is the complete list of stories the Minnesota Daily ran during that time on the suspensions and the boycott.

1. Timeline: A list of events that led to Gophers football suspensions, team boycott

2. Gophers football players demand ‘due process.’ The U already promises it.

4. Claeys on disciplinary process training: ‘We have to do a lot better’

9. Kaler on boycott: ‘Every member of the University community deserves to be treated with respect’