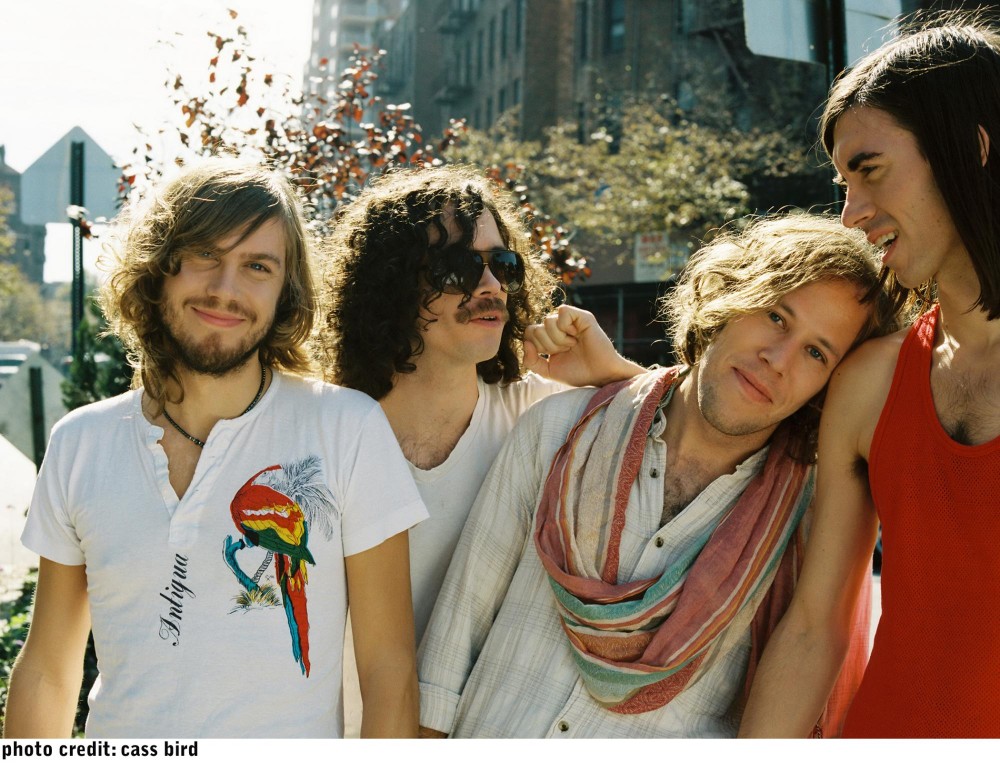 Although they look and sound like something straight from the '70s, Free Energy is the buzz of 2010. PHOTO COURTESY CASS BIRD

Free Energy WHERE: The Triple Rock WHEN: April 25th, 8 p.m. TICKETS: $8 One of the great tragedies of growing up in our time is that it takes a starry-eyed and envious viewing of “Dazed and Confused” to get our share of the big-party madness of the 1970s. Thankfully, Rolling Stone-backed Philadelphia party rockers Free Energy’s show at the Triple Rock this weekend will give the young people of Minneapolis another chance to “slow ride, take it easy.” For the band, itâÄôs a chance to get back to their Minnesota roots. The success the group’s keg party of an LP debut, “Stuck on Nothing,” has landed them on Dave Letterman’s stage, Rolling Stone’s best bands of 2010 list, and a generous “8.1” rating from hard-to-please Pitchfork. “It’s nice to have people pay attention,” said lead vocalist Paul Strangers. “But we’ve been doing this so long. It doesn’t really feel any different.” “I guess it gives my mom something to talk about âÄî so that’s nice.” So far, it has been critics’ consensus that when you write about Free Energy, you must make nostalgic âÄô70s comparisons. According to Strangers, these analogies are not unfounded. “We’re very interested in our musical heritage. Classic Rock is like the new folk music of the U.S.,” he said. “I feel like our culture has kinda turned its back on older rock ‘n’ roll.âÄù Specifically, the howler cited such ’70s stadium-packers as Bob Seeger , Peter Gabriel , Jackson Browne and Tom Petty . “We’ve even started listening to the Eagles,” he confessed. “I never thought I would do that,” Strangers hails from Red Wing, Minn., home of the workingman’s most trusted dirt-kickers, Red Wing Shoes. He said that growing up in a small town is like growing up in a bubble, where kids are able to see themselves as the center of the world. It’s precisely that generous delusion that landed him where he is today . “When you are trying to make things, it’s very important to be in a bubble; to feel like you can’t fail,” he said. “I just can’t imagine getting that from a big city.” Before forming Free Energy, Strangers and the Wells Brothers were in a mildly successful Minneapolis indie group called Hockey Night, who hung up their sticks about a year ago. “The band was not working for many years before we broke up,” Strangers said. “We kept trying to put band-aids on it, but nothing worked.” With the big record label DFA knocking on their door, and tension and animosity slowly suffocating the band, Strangers and the Wells brothers decided to take up the major record label’s offer as Free Energy. “It’s hard being in a relationship like that, because you are all friends, but the music just wasn’t working,” he said. On their horizons, the group that is working, Free energy, will be releasing a grandiose video for their nostalgia jam “Bang Pop,” playing some festivals, including Pitchfork, and working on a new album. “The new songs are along the same lines [as our first record],” he said. “Some of it’s a little heavier, more riff-driven, and some of it’s lighter, more Fleetwood Mac-y.” Strangers also has a message for college students that correlates well with the impending finals-week grind. “I would say don’t study too hard, just focus on doing what you want to do.”