The University of Minnesota President Eric Kaler announced Friday he will step down on July 1, 2019. 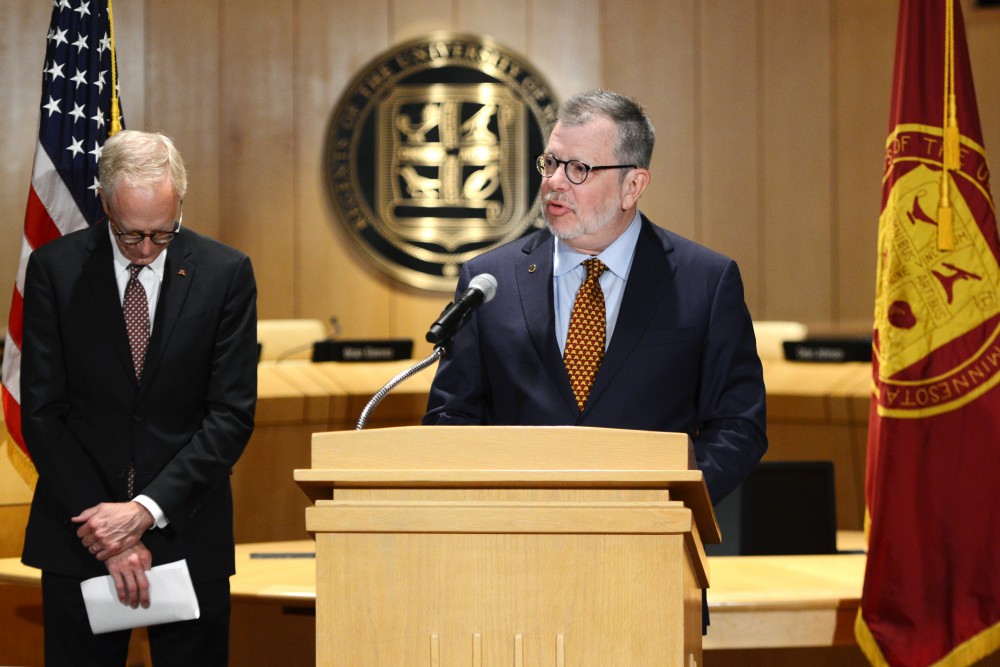 University President Eric Kaler fields questions after stepping down as president one year before his term is scheduled to end on July 13, 2018 at McNamara Alumni Center.

University of Minnesota President Eric Kaler announced on Friday afternoon he will step down as president one year before his term is scheduled to end.

Kaler announced in a statement that he would step down effective July 1, 2019, citing his above-average tenure length and the need for new leadership. He will later assume a faculty position in the University’s Department of Chemical Engineering and Materials Sciences.

“This is an incredibly demanding job, essentially seven days a week, evenings and nights included, and as proud and confident of my contributions and ability as I am, I also know that the University will benefit from a fresh perspective. Quite simply, it is time,” he said in the statement.

At a Friday afternoon press conference, Kaler said he’s held conversations with the University’s Board of Regents about his resignation over the past six months.

Board of Regent Chair David McMillian said at the press conference the search for a new president will begin immediately, with the board leading the search.

Kaler started at the University in 2011, and during his time the University has seen administrative cuts of around $90 million, several athletic scandals and disputes with legislators.

Kaler said he will continue as the role of President Emeritus for one year after he steps down to continue the $4 billion Driven campaign, the recruitment campaign that highlights University goals.

“I look forward then to a sabbatical before assuming my faculty position in our spectacular Department of Chemical Engineering and Materials Science,” Kaler said.

Kaler received a chemical engineering Ph.D. from the University in 1982 before spending the next 29 years in faculty and administrative roles at public institutions across the country.

Chair of the state House higher education committee Rep. Buds Nornes, Rep-Fergus Falls, said he was surprised by the resignation. Last legislative session, the University did not receive its supplemental budget request, resulting in a tuition increase for undergraduate resident students on the Twin Cities and Morris campuses approved by the Board of Regents in June.

Nornes said this wasn’t due to a lack of leadership on Kaler’s part.

“President Kaler has provided dedicated and principled leadership to the University of Minnesota. All of us owe him a debt of gratitude for his very important contributions to the betterment of our University and our State,” said Minnesota Governor Mark Dayton in a statement.

Member of the Senate higher education committee Sen. Jim Abeler, R-Anoka, said Kaler sometimes received blame for athletic scandals at the Capitol, but added he was an advocate for the University throughout his career.

“There was discussion there might be some turnover,” he said. “There were people who were hoping he would leave, and some people hoping he would stay… Some [lawmakers] were disappointed about the scandals, and [Kaler] is the top of the food chain.”

Joshua Preston, chair of the student representatives to the board, said he was surprised by Kaler’s decision and stressed the importance of student involvement in the selection process of the new president.

“Students must be involved in the selection of our University’s next president… students have to be at the table,” he said

Preston said the next president needs to represent the diversity of the University and take student input into account.

“The next president will also be responsible for the systemwide strategic plan, not to mention set the tone for how the University responds to sexual assault in the future, managing the costs of tuition and lead a $4 billion institution,” Preston said.

James Farnsworth, a Minnesota Student Association leader, said he thanks Kaler for his service.

“He was always responsive to the countless stakeholder groups he was responsible for engaging with as President. From the student government perspective, he always took our ideas seriously and was always willing to engage with our proposals and ideas,” Farnsworth said.