Mike Judge’s latest installment makes with the Bateman but not with the laughs. 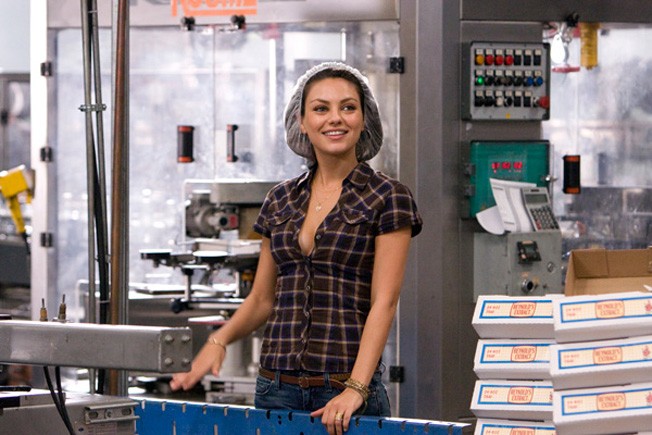 âÄúExtractâÄù DIRECTED BY: Mike Judge STARRING: Jason Bateman, Mila Kunis, Kristen Wiig RATED: R SHOWING: Area theaters âÄúThe creator of âÄòOffice SpaceâÄô heads back to work,âÄù proclaims the trailer for Mike JudgeâÄôs new film âÄúExtract,âÄù which premiered last week. ItâÄôs back to work not only for Judge, ending his three-year hiatus from filmmaking after âÄúIdiosyncrasyâÄù in 2006, but also for his audience, who havenâÄôt been back to the job site since Initech âÄòs tragic fire 10 short years ago. When itâÄôs a Mike Judge film, itâÄôs safe to say that much of the audience probably looked forward to seeing the crew punch the clock again. (This time at ReynoldâÄôs Extract factory, also in a nameless American city.) However, with this new crack at the genre, Judge unfortunately falls short. âÄúExtractâÄù tells the story of chirpy factory manager, Joel, played by Jason Bateman, whose life is a mix of frustrations both at home with his sexually dry wife and at work as he deals with all the nincompoops he employs. When one of his employees wrecks his balls in a freak accident caused by a squawky old lady, Mila Kunis enters as a roving con-artist and bombshell babe named Cindy, attempting to manipulate her way into a piece of the settlement money. Meanwhile, Joel, in a drug-induced haze, hires a gigolo to act as a pool boy and seduce his wife to justify his plans of getting with Cindy. The initial shortcoming in this movie is obvious at first glance: The jokes are, for the most part, cheap if not worthless. If you giggle when a character gets hit in the balls or yuck at the thought of a male prostitute, then you might like this film, otherwise most of the jokes seem to be at a surprisingly low level for a Mike Judge film. The delightfully awkward middle America co-workers that peppered âÄúOffice SpaceâÄù are replaced now by over exaggerations that tend to irritate more than they do amuse. This is epitomized by the dense neighbor who approaches JoelâÄôs car, accompanied by a silly tuba groan, for a âÄúquick chatâÄù whenever Joel comes home. It got a few grins the first time it happened, but by the third and fourth repetitive incident, going home was just as much a painful experience for Joel as it was for the audience. Other detractors of the film are the production details that become easily noticeable once the post-buildup boredom sets in. For instance, there are really only a handful of different and rather unimpressive settings that are repeated over and over again. ItâÄôs not hard to visualize the different scenes being recorded one after the other. The liberal use of sound effects and occasional music is more noticeable than the forced laugh-track on âÄúEverybody Loves Raymond.âÄù Also, both Joel and the gigolo wear the same outfit for practically the entire movie, as if theyâÄôre unchanging characters in a cartoon. One of the best things about âÄúOffice SpaceâÄù was the way that everything came together in the end in miraculous connections. Without any semblance of a similarly liberating conclusion, âÄúExtract’sâÄù version seems a little bit pointless. The humor used in âÄúExtractâÄù lacks the intelligence and subtlety that so defined âÄúOffice SpaceâÄù and in the end leaves the audience without memorable characters to quote and without a reason for watching. âÄúExtractâÄù ends up either as a boring romantic film with slightly witty humor or a not particularly funny comedy that is a bit frustrated âÄ¦ sexually. 6.5/10