So this is Christmas

Red Bull generation pulls together another reason to party all night. 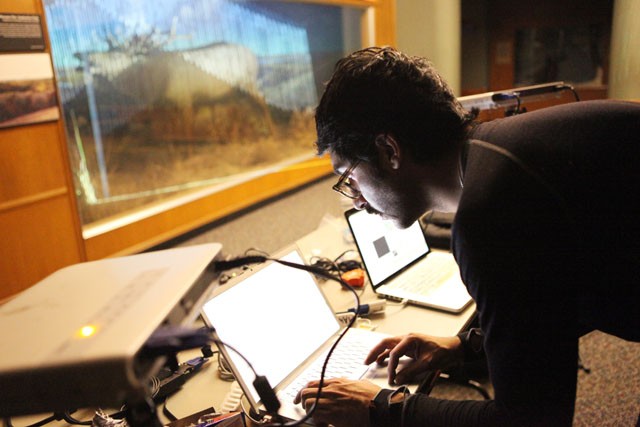 Where there were once blades of grass reflecting a late-setting sun, thereâÄôs snow, internalizing the early darkness and regurgitating it back onto its afternoon trespassers. The lazy activities that could extend almost the entire day are cut into brusque, sleepy attempts at the smallest accomplishments in the winter.

The Bell Museum already showcases these seasonal scenes in its dioramas. Like any other great piece of artwork, these meticulously designed time capsules highlight the beauty of each season spectacularly. Now, the museum looks to take the exhibits one step further with its newest Bell Museum social events series.

âÄúWe wanted to find a way to bring scientists and artists together,âÄù Shanai Matteson said. Matteson is the coordinator for this weekâÄôs installment with Ali Momeni.

âÄúDioramas are pieces of art, why wouldnâÄôt we want to work with contemporary artists to do a collaborative event?âÄù Matteson said.

It makes sense. Circadian rhythms and nature imagery are the bread and butter of most writers and artists. Their engrossed depictions of everything from the mounted deer head in their parentsâÄô farmhouse to a cockroach crawling along the underbelly of a willow tree get a respectful nod.

âÄúThe two fields [of science and art] have a lot of overlapping interests that bring out the best in one another,âÄù Matteson said.

Frank Barnwell, a retired University of Minnesota biology professor, will be giving the diorama tour. While attendees snack on their Red Stag Supperclub  treats, theyâÄôll be able to check out the work of the artist-in-residence, Ali Momeni.

Momeni is, in addition to being an active member of the artist community in Minneapolis at large, an assistant University art professor.

âÄúThis is the first year of the event, and weâÄôre very excited about the work weâÄôve seen come out of it so far,âÄù Matteson said.

Last weekâÄôs event included early 1900s Bell Museum nature photographs by Ned Huff. The photos were reassembled by artist Matthew Bakkom into an exhibit set to music, which will be on display as well.

Momeni will be working primarily with light and sound for this weekâÄôs installment of the series, evoking a yearâÄôs worth of chirps, ribbits, growls and coyote yelps.

Even the most grumbling city dweller will have a transcendentalist, eye-opening time at this exhibit. If youâÄôre doubtful, best leave your seasonal affective disorder at home and stop ruining it for the rest of us.