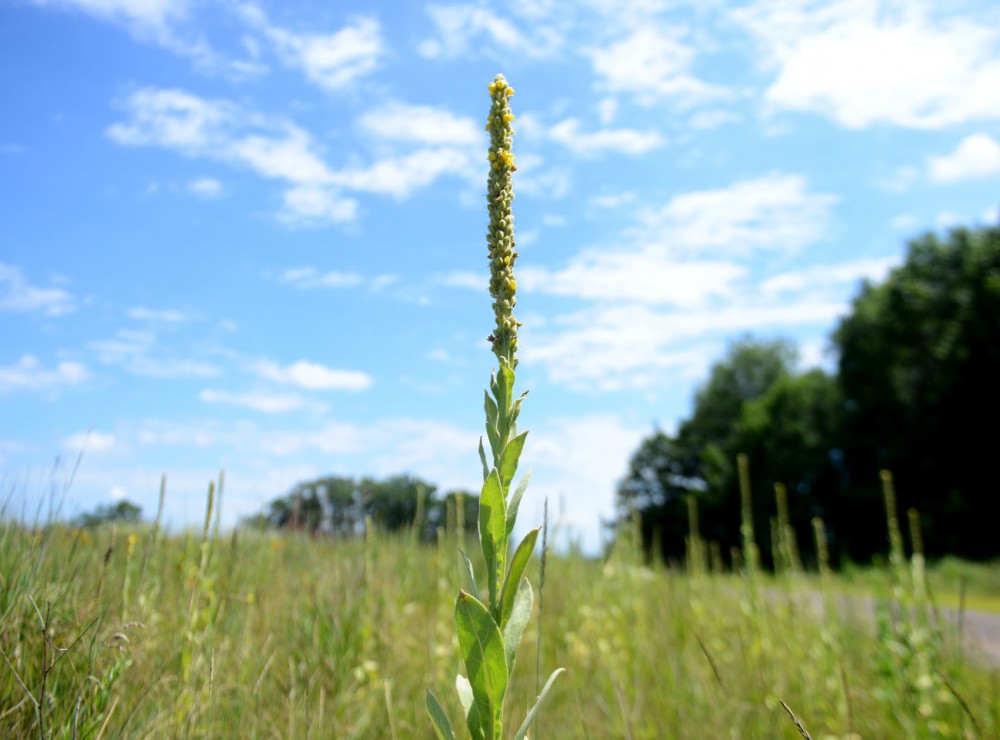 A stalk of Mullein, an exotic species, grows at Cedar Creek Ecosystem Science Reserve on Friday, July 24. University researcher Eric Seabloom published a study last week about exotic species that explores how the origin of a plant predicts its response to nutrient enrichment and herbivores.

Sarah Thamer
Recent University of Minnesota research suggests the origin of a plant species can help predict its reaction to added nutrients.
A July 15 study found that adding nutrients to ecosystems makes exotic plant species thrive and can cause native species to decrease in abundance and diversity. The study’s authors suggest the worldwide trend in nutrient enrichment could lead to an increase in exotic plant dominance in grasslands.
An international team of researchers examined plant species in 64 grasslands in 13 countries. The team found exotic species are six times more likely to dominate native species, which were harmed by the introduction of fertilizer.
Eric Seabloom, lead author of the study and researcher in the University’s College of Biological Sciences, said he hopes the study will inform people when considering whether certain exotic species are harmful.
“This is a really unique approach because to do the same experiment gives a lot of power to understand how the world works,” Seabloom said.
Seabloom also co-leads Cedar Creek Ecosystem Science Reserve, a University research site also utilized by the study.
The research team used data collected by Nutrient Network scientists, an ecology research network that oversees 80 grassland sites in 20 countries. Seabloom co-founded the network, which is headquartered at the University’s Department of Ecology, Evolution and Behavior.
Exotic and invasive species are brought over both intentionally and unintentionally by humans. The emerald ash borer arrived in the U.S. unintentionally through solid wood packing material, said Monika Chandler, invasive species specialist for the Minnesota Department of Agriculture.
“Most plants, however, that have been introduced have been beneficial, like many of our crops, which have not been problematic. But a handful of species can be very damaging,” Chandler said.
But when species are harmful, they can pose economic, ecological and health threats.
While Minnesota hosts various non-native species, only a subset is considered invasive. Hitchhiking — which moves soil from one place to another and increases the risk of spread — is one way to introduce invasive species, said Laura Van Riper, a terrestrial invasive species coordinator for the Minnesota Department of Natural Resources.
Seabloom said Minnesota’s prairie environment is resilient to exotic plant species.
He said his study took a broader approach and creates a simplified protocol for other researchers to follow.
“There is about a thousand native species and about a few hundred exotic species in the sites we put together,” Seabloom said, “and one of the most fundamental things about this study is to bring a large set of data to bear on an ongoing and acrimonious debate that hasn’t had a lot of evidence involved in it.”
Delete Image
Align Left
Align Center
Align Right
Align Left
Align Center
Delete Heading