Gophers hoping to keep trophy around 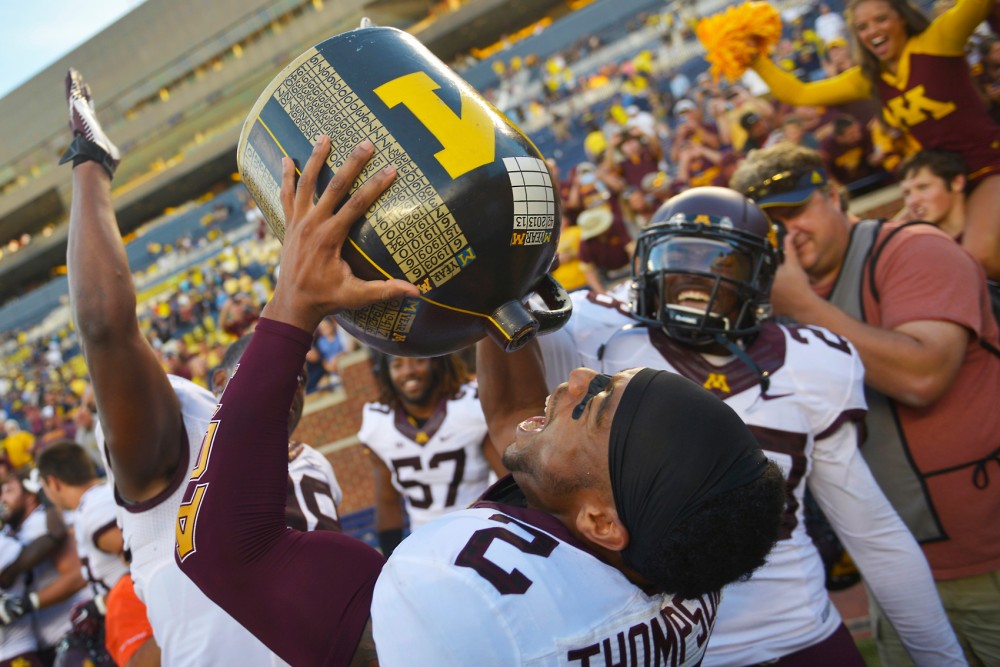 Gophers defensive back Cedric Thompson pretends to drink from the Little Brown Jug after beating Michigan 30-14 on Sept. 27, 2015.

Ryan Falk
The Gophers will try to break a 50-year-old trend when they face the University of Michigan Saturday evening.
The Gophers will try to keep the Little Brown Jug, the trophy given to the winner of every football game between Minnesota and Michigan, for the second straight season after beating the Wolverines in Michigan 30-14 last year. The Gophers haven’t won the trophy in back-to-back years since winning the jug four years in a row from 1960 to 1963.
“Obviously, we’re excited to have the Little Brown Jug in the state of Minnesota,” defensive coordinator Tracy Claeys said. “It’s meant a lot to a lot of people, including our team, and it’s been to a lot of events over the last year. So we’ve enjoyed having it around.”
Redshirt senior quarterback Mitch Leidner said last year’s victory, the Gophers first over Michigan since 2005, was a moment he’ll never forget.
When the team arrived back to campus after the game last year, a group of fans were waiting to celebrate.
“Huge for us as a program and a special day for us,” Leidner said. “To come back to Minneapolis and have people waiting outside the complex is an unbelievable thing.”
The Gophers will be challenged to keep the trophy, with the Wolverines ranked No. 15 entering the weekend.
“Anytime you face challenges, and Michigan for sure is a challenge, it’s an incredible opportunity for us to make history,” redshirt senior guard Jon Christenson said. “Obviously, for our teammates, we just want to go out there and keep that jug.”
Michigan will come to TCF Bank Stadium with the top defense in the Big Ten, allowing 9.3 points per game.
It’s a huge improvement for Michigan under new head coach Jim Harbaugh, after allowing 22.4 points per game a year ago.
“They play a lot harder than they did last year,” offensive coordinator Matt Limegrover said. “That’s a testament to the coaching staff, those defensive coaches, because they
had good players last year.”
Minnesota will have to fight against a Michigan pass rush that has 18 sacks this season after giving up two sacks in their last game against the University of Nebraska-Lincoln.
“[Leidner] got hit a few times, and he’s a tough guy,” Christenson said. “We’ll definitely have an emphasis on [pass protection] this week.”
Michigan and Minnesota are both coming off bye weeks following losses, but the Wolverines lost in dramatic fashion on a fumbled snap on a punt that Michigan State returned for a touchdown to defeat Michigan in the final seconds of their game.
Limegrover said he doesn’t expect the Wolverines to have any lingering emotions after the gut-wrenching loss to the
cross-state Spartans.
“They’ve been able to wash [the Michigan State game] out of their mouths, and I think they’re going to be ready to go,” Limegrover said.
The Gophers have similar motivation after a 48-25 loss to Nebraska.
“This is an incredibly old, incredibly important rivalry, so we’ll be going into this game really excited,” Christenson said.
Delete Image
Align Left
Align Center
Align Right
Align Left
Align Center
Delete Heading