The Gophers head back to Pennsylvania just one week after they were swept by the Nittany Lions to lose home-ice advantage. 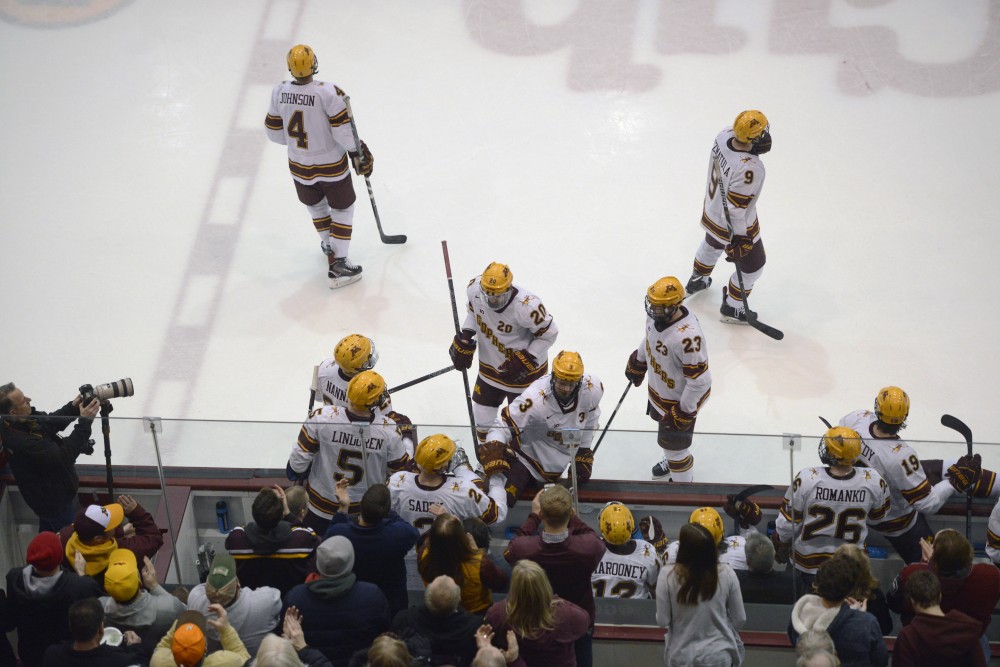 Gophers players rotate on and off the ice during a game at 3M at Mariucci Arena on Feb. 16.

From taunting players to scoring five in each game, the Nittany Lions seemed to have it out for Minnesota last weekend, which resulted in Penn State sweeping the team.

The matchup will be renewed this weekend for the Big Ten tournament in State College, Pennsylvania — just six days removed from where the two teams left off Saturday.

“I think as a team we’re very pissed off about how last weekend went,” defenseman Ryan Lindgren said. “We’re going to come in there with an edge to us and show them that last weekend was not Gopher hockey.”

Minnesota heads to Penn State after losing home-ice advantage in the losses last weekend. This weekend’s best-of-three series is for the right to play in a one-game semifinal next weekend.

Before the Nittany Lions blew them out, the Gophers were one of the winningest teams down the stretch of the last eight games. Not only did Minnesota struggle to defend Penn State, it also struggled to score. The Gophers scored three goals in the two losses.

“There’s some bad blood between us [and Penn State],” Lindgren said. “That will make the games a lot more fun, we’ll be ready for it and excited.”

Lindgren and Penn State forward Evan Barratt were in each team’s penalty box at the same time Friday and they exchanged words throughout their two minutes in the box. Barratt mimed a crying motion with his hands as the two exchanged words.

After his time in the box, Barratt came out and delivered a hit on Lindgren, scoring a goal shortly after.

There will be no shortage of emotion in the game as Penn State revived its season after an eight-game stretch, going 0-6-2 to come back with a three-game win streak as the regular season came to an end. The Gophers went 6-1-1 in their last eight games before last weekend.

“Certainly hope we bring emotion this weekend, we didn’t have a lot of it last weekend,” associate head coach Mike Guentzel said. “We have to play a bit more passionate, with a little more energy and a little more attention to detail.”

Guentzel said the lack of intensity and lack of effort to get the one point they needed in the last weekend was the hardest thing to explain.

The Gophers had the chance to face Penn State at 3M Arena at Mariucci if they earned just one point of the six available over the Nittany Lions. They didn’t get the point and now the team plays in the Pegula Ice Arena with hockey fans waiting to see the home team advance to the semifinals.

In the end, Minnesota is thankful to go back there and play Penn State.

“It’s not often you get a do-over, but we get a do-over,” head coach Don Lucia said. “Hopefully, this weekend we’ll rebound and play the right way all weekend long.”