Kirkwood powers U to bowl eligibility

Donnell Kirkwood and a dominant defense led Minnesota past the Illini, 17-3. 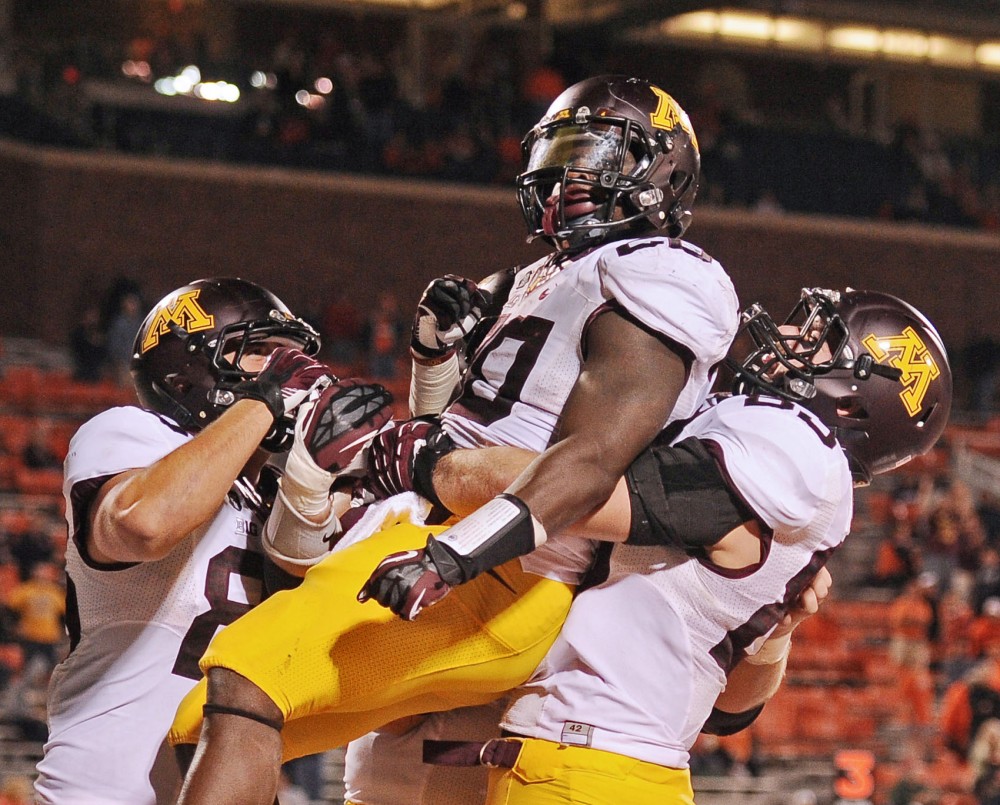 Gophers offense celebrates after Minnesota running back Donnell Kirkwood scores their second touchdown of the game against Illinois on Nov. 10, 2012 at Memorial Stadium in Champaign, Ill.

“Power football,” the Gophers running back said after the best game of his career. “We want power.”

The Gophers’ offense wasn’t explosive. It certainly wasn’t flashy, and at times it was very predictable. But it had power, thanks to Kirkwood.

The sophomore halfback ran 28 times for 152 yards and a pair of touchdowns as Minnesota beat Illinois 17-3 to become bowl eligible for the first time since 2009.

“The seniors deserve it. The team deserves it,” Kirkwood said after Minnesota’s sixth win of the season. “Now we know that all the hard work we’ve done has paid off.”

It’s been another up-and-down season for Minnesota, which was blown out at home by Michigan last weekend.

But there have been more ups than downs, and Saturday, the Gophers regrouped and played the
disciplined brand of football that head coach Jerry Kill has preached since arriving at Minnesota in 2010.

The result was a Big Ten road win — Kill’s first with the Gophers.

“We played old-fashioned football. We ran the ball, played great defense, and we didn’t turn it over,” Kill said. “I thought those were the things that helped us get to where we are.”

But Minnesota held strong and stuffed Scheelhaase on a third-down play at the one-yard line. Illinois settled for a field goal, and the Gophers held the Illini out of the red zone until the game’s final minute.

“It set the tone for the rest of the game,” Minnesota defensive lineman D.L. Wilhite said of the goal-line stand. “They could’ve easily won themselves some momentum if they had been able to punch it in.”

The Gophers didn’t exactly camp out in the red zone either. Illinois snuffed out the Gophers’ conservative offensive formula of run-run-pass and kept Minnesota in check for most of the afternoon.

But Kirkwood and his backup, Rodrick Williams, broke loose a couple of times and set up Gophers scores.

The duo accounted for every yard of Minnesota’s first scoring drive, which ended in a game-tying field goal shortly before halftime.

Kirkwood and Williams led the Gophers on their first touchdown drive, too, though they had some help this time around.

The teams exchanged a few punts to start the second half until Minnesota took control of the game.

The Gophers converted a few first downs, and on a pivotal third-and-14 at the Illini 29-yard line, true freshman quarterback Philip Nelson hooked up with wide receiver Brandon Green for 13 yards — one of Nelson’s nine completions and his biggest of the game.

Nelson picked up two yards via a quarterback sneak on the subsequent fourth-and-one play, and Kirkwood scored a few plays later to give Minnesota a 10-3 lead midway through the third quarter.

“[Kirkwood] does a great job getting north and south, grinding out those yards,” Nelson said. “That’s huge, having him back there behind that big offensive line.”

The Illini had a couple chances to tie the game in the fourth quarter, but they failed to convert. They turned the ball over on downs, forced a punt and got the ball back — only to fumble it away on a third-and-one.

A couple of plays later, Kirkwood sealed the win with his second touchdown run.

As a team, the Gophers ran the ball 50 times for 231 yards and possessed the ball nearly 10 minutes longer than Illinois. Williams finished with 55 yards on 10 carries.

After the game, Kill, though visibly happy with the outcome, said his team has a lot to work on in the next couple of weeks as it prepares to play Nebraska and Michigan State.

But they won, and Saturday night, that’s all that mattered.

“It’s a breath of fresh air,” said Wilhite, a senior. “It feels good to improve and be the class — the senior class — that brings a bowl game back to Minnesota. We know we left our mark.”