Meanwhile, the men won twice on the road and reclaimed the tennis version of the Little Brown Jug against Michigan. 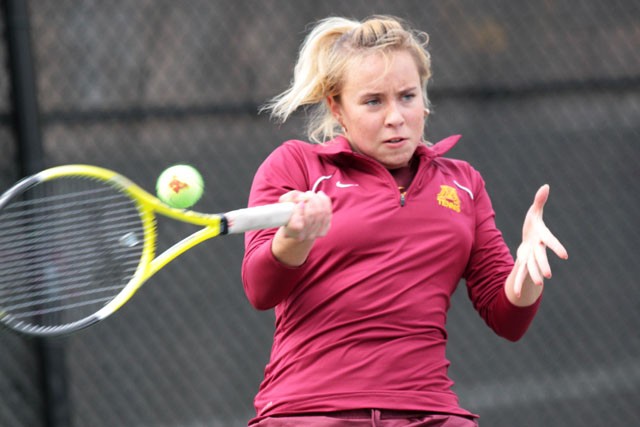 The Gophers womenâÄôs tennis team snapped its eight-match losing streak Sunday with a 4-3 victory over No. 60 Michigan State.

Just one day prior, Minnesota was defeated 7-0 by No. 8 Michigan in a dual match in which every Gophers player was defeated in straight sets.

Sunday was a different story.

After dropping the doubles point, Minnesota won three of the first five singles matches to even the score, 3-3.

With the score tied at 3-3 and five of the six singles matches complete, all eyes were on the No. 1 singles match, which pitted Minnesota freshman Natallia Pintusava against Michigan State sophomore Amy Barton.

After dropping the first set 6-3, Pintusava gained control of the second set, leading 5-1. That lead didnâÄôt last long as Barton rallied, reeling off five games in a row to gain a 6-5 lead.

However, Pintusava would respond by winning the next game and taking the tiebreak 7-3 to claim the second set and snatch the momentum in the process.

âÄúShe righted the ship mentally. She was pretty upset when she lost her lead in the second set,âÄù head coach Tyler Thomson said of the freshman. âÄúShe started being in control mentally, exhibiting more positivity and she made some better decisions when she was on defense that paid off.âÄù

PintusavaâÄôs victory at No. 1 sealed the GopherâÄôs first victory since Feb. 18.

âÄúI kind of forgot what it was like to win. ItâÄôs been a while. This was an important one for us,âÄù Thomson said. âÄúI really feel like we can finish the Big Ten season very strongly and we needed some momentum going in the right direction.âÄù

After a 4-3 victory against No. 53 Michigan State on Friday, the No. 24 Gophers reclaimed the tennis version of the Little Brown Jug on Saturday by defeating No. 22 Michigan.

Minnesota got out to an early lead Friday by securing the doubles point with three doubles victories. Then sophomore Rok Bonin and senior Tobias Wernet won straight set matches in No. 1 and No. 2 singles, respectively.

Junior Julian Dehn clinched the victory for the Gophers by winning 6-3, 6-4 in No. 6 singles.

The following day, Minnesota extended its win streak to five, with a 5-2 win over the Wolverines.

The Gophers got out to a 1-0 lead with victories in two of the three doubles matches. Michigan tied it up with a win in No. 3 singles, but sophomore Brendan Ruddock put Minnesota back on top with a straight set win in the No. 5 match.

The Wolverines tied it up yet again with a win in No. 1 singles, but the Gophers won the remainder of the matches to ice the victory and bring the Little Brown Jug back to Minneapolis.