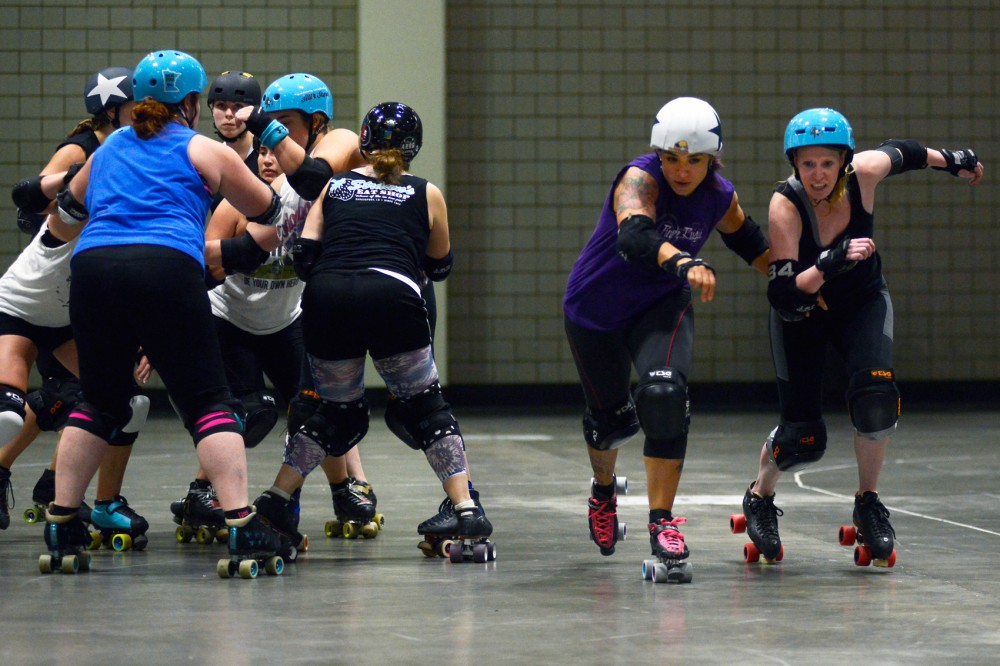 Isabella Romano
Meg Gronau, aka Fannie Tanner, is a mom. She drives a minivan. She’s charming and friendly. She covers her mouth when she chews. She wears Lulu Lemon and keeps her hair in cute, mini, twisty buns.
She can also take a punch. Gronau is the jammer for the Minnesota RollerGirls All-Stars travel team and the league’s new members manager.
“I’ve broken my collarbone,” Gronau said. “People skate around for weeks with ribs popped out of place. But you learn this mental toughness, and it’s really a great skill for life.”
The league’s traveling team’s season will end this month, but their home league is just starting up.
Eleven new players will join the ranks of the league’s four home teams: the Atomic Bombshells, the Dagger Dolls, the Garda Belts and the Rockits.
“Introducing all of the new people to the league really reminds you of why you joined in the first place,” Jessica Sawiki, aka Hurtrude Stein, member of the All-Stars and the Atomic Bombshells said.
Sawiki took to the sport quickly and hasn’t looked back. This is her sixth year with the Minnesota RollerGirls.
Gronau wasn’t won over so easily. A friend from an early childhood class introduced her to roller derby.
“I went to a match, and I said, ‘This is super awesome, and I never, ever want to do it,’ ” Gronau said. “I just thought, ‘These women are amazing, but that’s not
something I’m interested in. It looks like it hurts, and it looks dangerous.’ … and I have not actually changed my tune on that. No, no really, I’m joking.”
Though she was wary of roller derby, she was still interested in skating. She joined a recreational class, where it became apparent that she was simply too good not to be put to use, so she tried out for the league and has been an active member for five years now.
“You know Pavlov’s response with the dogs and the bells?” Gronau said. “Yeah, that’s how it is for me. When I put my jersey on, my stomach flips upside down and I start sweating. It is so scary. You never know what is going to happen or whose body is going to come flying at you from what angle.”
Still, both Gronau and Sawiki have certainly found their place in the league. Watching them skate is watching dedication, determination and passion at its finest.
“The coolest part is getting to know all of these wonderful women,” Gronau said. “There are people from all different walks of life. And the team dynamic is so amazingly supportive.”
Ages of league members range from 21 to over 50. There is a literal grandma playing for the Atomic Bombshells and the All-Stars. Her name is Sandy Olson, aka sandblastHER. Olson’s mother played roller derby when she was young, so naturally Olson put roller derby on her bucket list of things to do before she turned 50. She made the team at 49 and has been playing for six seasons now.
“I do think you have to have a toughness about you,” said Olson. “To win your spot on the track, you have to have that mentality. But I think there’s this idea of tattoos and white trash that goes with derby. And that’s just not right. Never have I met such caring, passionate and accepting people. The amount of care these women have for each other is amazing. And then, of course, we get on the track and kick butt.”
Olson’s granddaughter is only 2 years old, but she plans to have her in skates by the end of the year.
Roller derby is as much a show as it is a sport. The matches are double-headers, and a band plays at halftime. There’s a black eye face-painting booth for charity, too.
“It’s really fast-paced,” said Gronau. “If you want to see women playing sports, this is the place to do it. We train like athletes. But it’s also about the show and the entertainment and the experience.”
Dia De Los Rollers: Home Team Mini-tournament
Where Roy Wilkins Auditorium, 175 W. Kellogg Blvd., St. Paul
When 7:30 p.m. Saturday
Cost $15-18, $2 discount with a student ID
Delete Image
Align Left
Align Center
Align Right
Align Left
Align Center
Delete Heading