The team has conceded no more than one goal in any of its six matches so far. 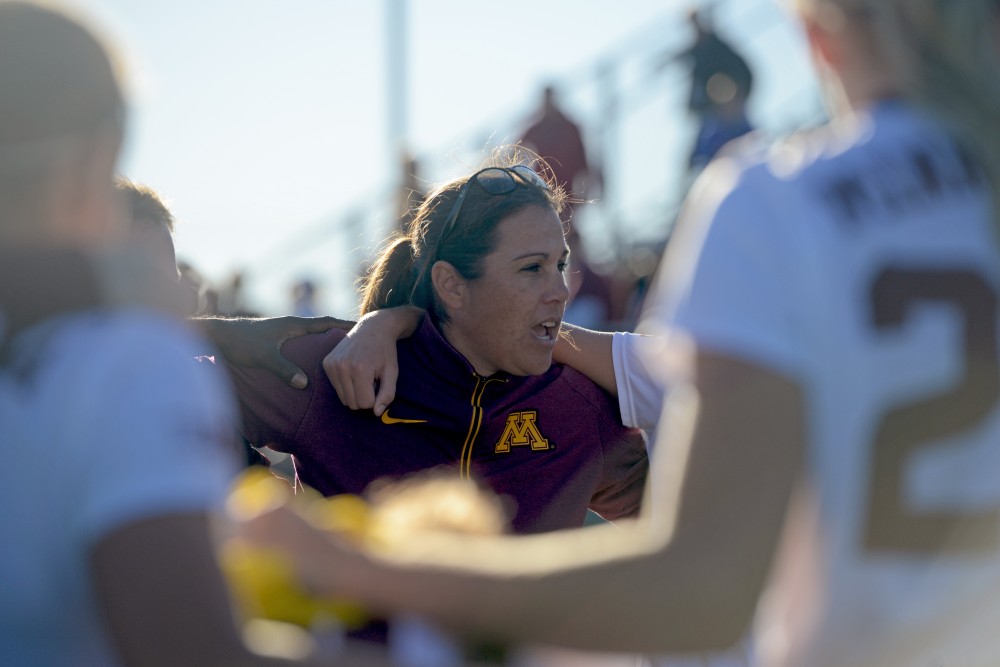 Head coach Stefanie Golan talks to the team after the game on Friday, Nov. 4, 2016 at Elizabeth Lyle Robbie Stadium.

The Gophers have started the season 3-1-2, and much of the reason for the team’s winning record so far can be attributed to the defense. Minnesota has not allowed more than one goal in any of their games.

“We’ve done a really good job with our defending, both through our forwards [and] midfield,” said goalkeeper Kailee Sharp. “Our team does a good job solving issues or anything going wrong in the moment.”

Defender Tori Burnett said the returning three starters in the back — Maddie Gaffney, Nikki Albrecht and Burnett — has led to success.

“We’re [a] very veteran [team],” Burnett said. “We all work together really well. It’s helpful that everyone [on defense] knows what they’re doing.”

Last season, the only time the Gophers conceded more than one goal was in a match against Stanford, but that was with former Minnesota goalie Tarah Hobbs. Freshman goalie Maddie Nielsen had a shutout in the team’s last match against Providence.

Assistant head coach Krystle Seidel said even though Minnesota is committed to defense, the team doesn’t worry about out-defending a competitor like Utah State, their next opponent. The Aggies, like the Gophers, have conceded just three goals this season.

“It’s never like we’re going to out-defend their defense, but we’re going to play our brand of soccer,” Seidel said. “We like to put a lot of pressure on the ball. We’ve got to make it difficult for other teams to play through us and around us by really going after them.”

Burnett is in her senior year. She said the senior class wants to leave a positive legacy behind for future teams.

“We’ve tried to create a family-oriented culture where everyone feels welcomed and part of something bigger than themselves,” Burnett said. “[Senior year] is capping off what we’ve worked for these past three years and leaving our stamp on the program.”

Burnett thinks the Gophers can win their next game against Utah State, the team’s last nonconference match, as long as they prepare physically and mentally.

“If we’re all focused and ready to play our version and our brand of soccer to the best of our abilities, there’s not a team in the country that can stand up to us,” she said.