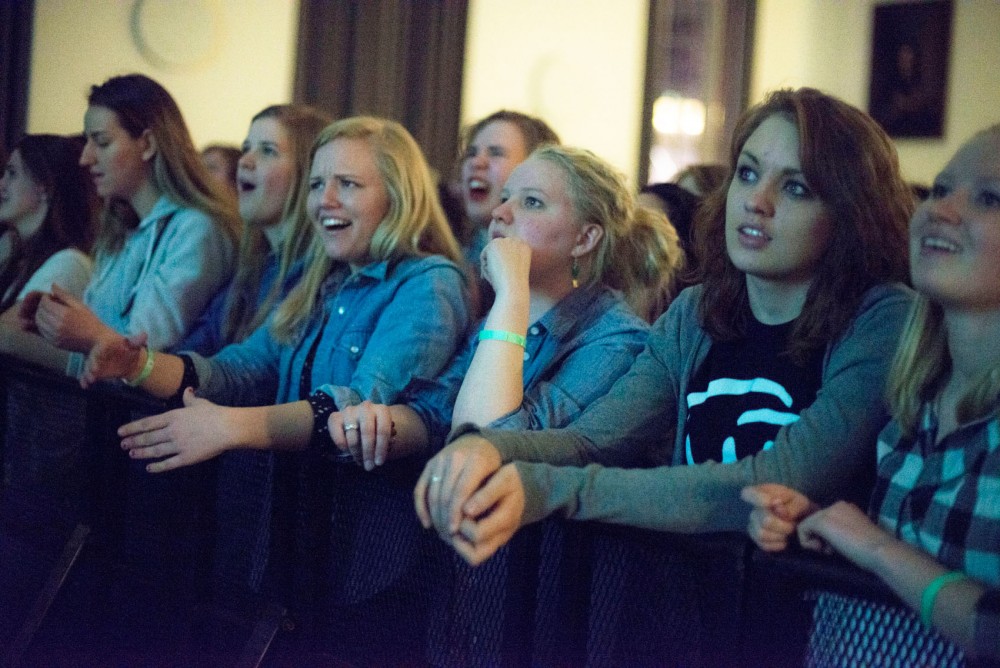 Students react after hearing Mac Miller announced as a headliner for upcoming Spring Jam at Coffman Union on Saturday.

This year’s Spring Jam headliner will be Mac Miller, with Earl Sweatshirt, Mod Sun and the Spring Jam Battle of the Bands winner as supporting acts at Mariucci Arena on April 26.

Student Unions and Activities predicted that this year’s festival will be the biggest Spring Jam to date. Cost for the performers will total about $190,000, paid for mostly by sponsorships and ticket sales. That’s nearly triple what the University has spent in past years for fewer artists.

The main concert will be a ticketed event to help pay for a higher-profile artist, but some students say the lineup isn’t worth the cost.

SUA’s Program Board marketing coordinator, Ashley Herink, said students’ most common response when surveyed about a ticketed Spring Jam was that they would pay $20 or $25 to see a headlining artist.

Other concerts — all free for students — include Gloriana, the Mowgli’s and Finish Ticket, which will play sets on Thursday of the weeklong festival. Minneapolis-based PoliÃ§a will play at noon Friday, with Leagues set to take the stage in front of Coffman Union at 9 p.m. Friday.

The Wake is sponsoring Leagues’ show and is paying SUA for the band to come, said The Wake sound and vision editor Sara Glesne.

Art senior Sarah Morgan said she’s pleased with this year’s lineup and will likely pay for the headliner.

“[The performers are] way better than last year,” she said. “I’m excited; I would pay.”

However, vocal music education sophomore Iris Kolodji said she’s excited for PoliÃ§a and some of the other free shows but doubts she’ll pay for the headliner.

“I think the free concerts will be good,” she said. “I’d probably pay for the tickets if [my friend’s band] wins battle of the bands, but otherwise, no.”

“They’re working from a large list of possible artists all year long,” he said. “The difficulty with both our homecoming show and Spring Jam show is that we only have one date.”

Miller began recording solo in 2009, but he didn’t gain much momentum until the following year with the release of the K.I.D.S. mixtape. His album “Blue Slide Park” was the first independently distributed debut album to top the Billboard 200 in 16 years. Miller’s sophomore effort, “Watching Movies with the Sound Off,” has been well received critically and commercially.

Mod Sun is a self-proclaimed “Hippy Hop” rapper from Bloomington, Minn. He’s gained national attention for his druggy pop-rap, joining one leg of the Vans Warped Tour this summer.