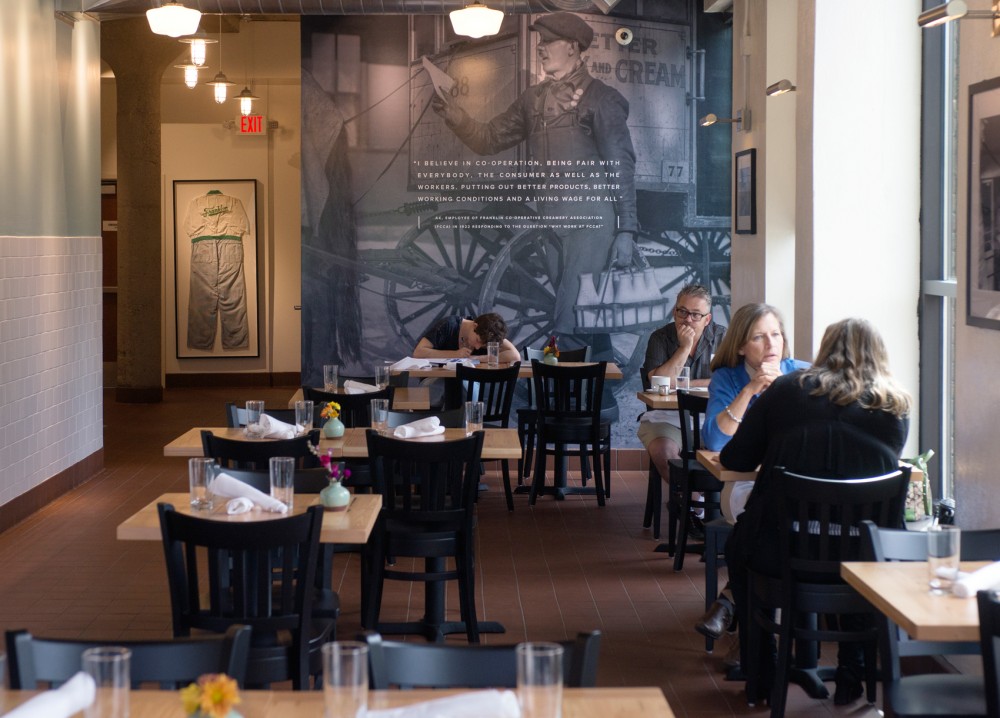 Chance Wellnitz
The Co-op Creamery Neighborhood Cafe has all the markings of a hip new restaurant: a minimal decor complete with vintage lighting and exposed concrete, photogenic food and  an executive chef known to the local culinary scene. Still, the restaurant never loses its sense of community amid the cool.
Although the cafe opened as an extension of the Seward Co-op in mid-August, the building it occupies dates back to 1920. Black and white photographs chronicling its history as the Franklin Co-operative Creamery Association line the walls. On a back wall, there is a mural with a 1922 quote attributed to A.K., an employee of the old co-operative.
The wall reads, “I believe in co-operation, being fair with everybody, the consumer as well as the workers. Putting out better products, better working conditions and a living wage for all.”
These values hold just as true for the Seward Cafe and Co-op today as they did in the 1920s.
The cafe implemented a no tipping policy and instead pays employees higher wages. Although menu items can be a tad pricey to accommodate the policy, the quality and flavors on display more than match the price tag.
Chef Lucas Almendinger, formerly of the Third Bird, designed a menu of locally sourced foods with an international flare.
The chicken and kimchee rice bowl ($13) sports fried chicken from Kadejan in Glenwood, Minn., alongside kimchee, a traditional Korean side dish of tangy fermented vegetables. It’s one of vegetables. It’s one of the smaller-portioned items on the menu, but with its blend of savory and tart flavors — not to mention two perfectly poached eggs — it is one that is sure to satisfy.
The attention to detail carries through to the more traditional items as well.
An order of buttermilk pancakes ($10) includes two light cakes anchored to the plate by banana slices and a smattering of peanut butter to ensure they don’t float away. The cakes are soft while maintaining a delicate crispiness around the edges. Though filling, the rich maple syrup served alongside will have one tempted for a second helping.
The Real Vanilla Latte ($3.75-5) was well worth the purchase. The barista makes the drink with simple syrup infused with real vanilla beans, making it perfect to sip and savor.
The cafe serves these items until 3 p.m., after which the menu takes a turn for the pricier. However, at only a short bus or bike ride from West Bank, the Co-op Creamery gives the University students looking for a lunch of pancakes or soup and a sandwich alike something to luxuriate in.
Delete Image
Align Left
Align Center
Align Right
Align Left
Align Center
Delete Heading