University researchers hope that the NOvA Far Detector will help physicists understand the how the universe started. 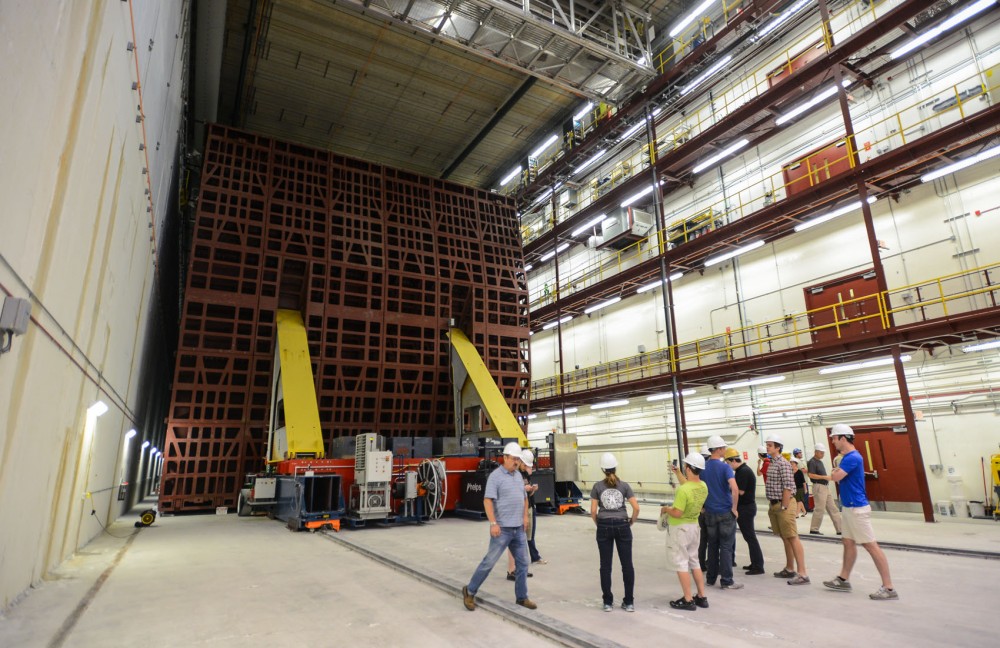 Members of a tour group take photos while observing the world-class NOvA far detector Thursday afternoon in Ash River, Minn. The 14,000-ton detector is one of the world's largest free-standing plastic structures.

A newly unveiled 14,000-ton neutrino detector built in part by hundreds of University of Minnesota students and staff is searching a kilometers-wide beam of particles for clues about the beginning of the universe.

In northern Minnesota, the University celebrated on Thursday the completion of its NOvA Far Detector, one of the world’s largest plastic structures. Over the span of four years, it was partially assembled in an industrial space near campus by 700 University students across two dozen different majors.

Now that it’s complete, scientists are hoping that the detector can provide data to help understand some of physics’ biggest questions — including information about the universe’s inception.

Hundreds flocked from all over the country to tour the completed detector, located on University-owned land just south of the Canadian border.

The $278 million NOvA experiment was primarily funded by the U.S. Department of Energy Office of Science, which has an agreement with the University allowing the school to operate the detector.

The project uses one of only two neutrino beams in the world, along with one in Japan, said Marvin Marshak, a physics professor and the Ash River Laboratory director.

Though the detector’s construction just wrapped up this summer, it saw its first neutrinos back in February. NOvA will initially run for six years, researchers said, but will likely continue after that.

“Neutrinos are particles that are everywhere in the universe … but we actually know the least about them relative to other particles we study,” said physics doctoral student Dominick Rocco, who is helping analyze data from the
detector. “Understanding their basic properties will have important ramifications in terms of understanding how the universe works and why we’re here.”

An accelerator in Illinois shoots a beam of neutrinos through the earth to northern Minnesota, with the particles traveling across 500 miles in less than three milliseconds. The accelerator also sends the beam to a closer detector at Fermilab in northern Illinois.

A trillion neutrinos from the sun and other celestial objects pass through each person every second, but the detectors only capture a few at the most each day.

Little is known about the particles, which travel almost as fast as the speed of light, since they have weak and rare interactions with one another.

“As we’re sitting here we’re being bombarded by neutrinos coming from earth, cosmic rays, sun and stuff that’s inside us, but they don’t do anything so we don’t notice them,” Marshak said. “If we want to catch a neutrino, we need this huge massive thing, and that only occasionally catches one.”

Neutrinos, which have a neutral charge, come in three different kinds: muon, tau and electron, the last of which the NOvA Far Detector is optimized to measure.

The nearly 500-mile trip allows more time for the occasional neutrino to interact with the detector and release charged particles, which creates a pattern of light that scientists can use to find out the type of neutrino behind the interaction and its energy. Many neutrinos that were around for the beginning of the universe are still present today.

It’s the light produced by neutrinos, not the particles themselves, that are trapped by the detector, said physics professor Ken Heller.

“We’re trying to determine the mass hierarchy … and account for the existence of the universe,” he said.

The third goal of NOvA, along with organizing neutrinos by mass and observing their behavior, is comparing neutrinos and antineutrinos.

Marshak said he thinks it’s worth investigating the hypothesis that after the Big Bang, matter took slight dominance over its counterpoint because of asymmetry between neutrinos and antineutrinos.

“It’s something one as a physicist worries about — why isn’t there much anti-matter?” he said.

Even if the mysteries of the universe aren’t solved, Heller said the information gleaned from the experiment will still be valuable.

“Suppose we do this project and we don’t measure an asymmetry or the asymmetry is small enough so it can’t explain the universe,” he said. “That’s still neat because it means there’s some other physics that we don’t know.”

Heller said another project at the detector is examining neutrinos emitted from supernovas, which could lead to explanations of how stars blow up.

“There’s a lot of projects that the Far Detector can do,” he said.

For Rocco, who’s helping to analyze NOvA data, it’s just the beginning of an exciting foray.

“It’s been an adventure. We have this wonderful, huge detector, and it’s using technology that’s never been combined in this way before,” Rocco said. “Taking some of the first data and trying to understand how this giant machine behaves has been a wild experience.”