Minnesota split a pair of matches on the women’s side over the weekend. 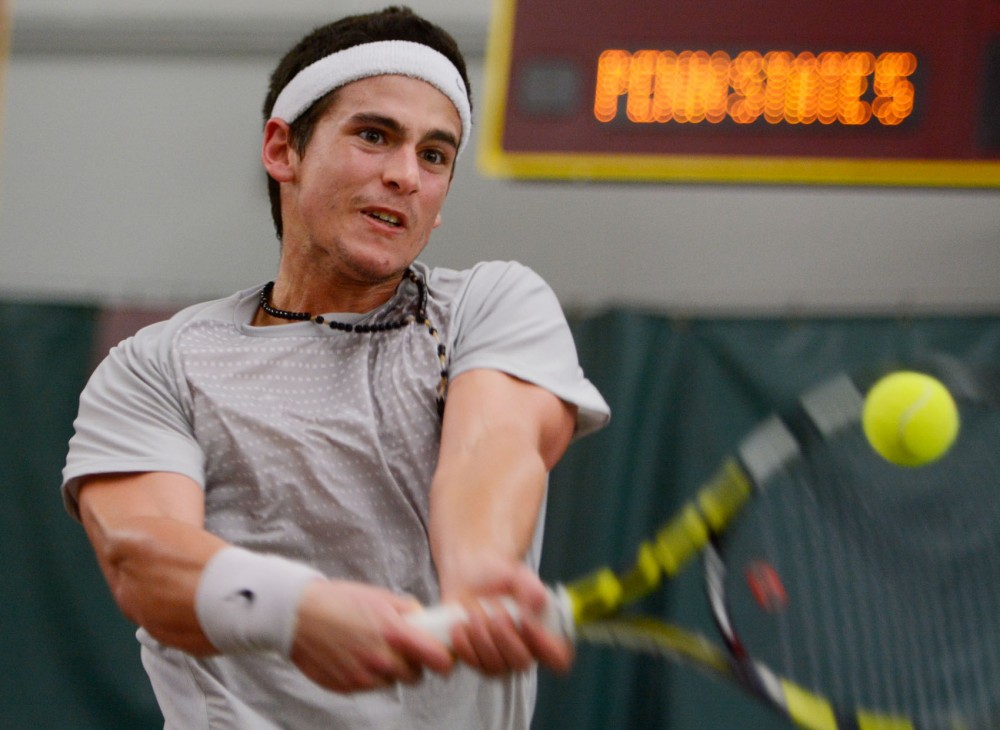 No. 51 Minnesota (9-10, 3-4 Big Ten) faced a tough draw this weekend against a pair of top-25 opponents. And it only got tougher for the team, which was without junior Jack Hamburg — one of its top players.

The Gophers lost twice, falling 5-2 to No. 1 Ohio State on Friday and 4-1 to No. 24 Penn State on Sunday at Baseline Tennis Center.

Still, the team was far from discouraged.

“I think we’re really close,” junior Leandro Toledo said. “[This weekend] showed us that we’re right there. We just need a little game-changer.”

Toledo seems to be changing the game for Minnesota. He came away with a weekend sweep at No. 1 singles, beating No. 8 Peter Kobelt on Friday before topping No. 50 Leonard Stakhovsky on Sunday.

“I played really amazing this weekend,” Toledo said. “I’m really proud of myself. It gave me a lot of confidence for myself for the rest of the season.”

Other members of Minnesota’s lineup struggled to produce results, though, as Hamburg’s injury forced players to move up a spot throughout the order.

“He contributes a lot,” assistant coach Rok Bonin said of Hamburg, the team’s regular No. 3 singles player. “We still managed to be competitive.”

The Gophers’ 5-2 defeat at the hands of Ohio State was their best result against the Buckeyes since they fell by the same score in 2006.

Still, the opportunities for others to step in and step up with Hamburg out could benefit the team when he returns.

“Now we know that even with a worse lineup, we can do just as good,” Bonin said.

The Gophers women’s tennis team (14-5, 4-2 Big Ten) has gotten contributions from the bottom of its order all season.

Those contributions carried No. 55 Minnesota to a victory Sunday afternoon.

The Gophers won the doubles point and then came up victorious at No. 4 singles, No. 5 singles and No. 6 singles en route to a 4-3 victory  over Penn State in University Park, Pa.

“I think any road win’s good,” head coach Chuck Merzbacher said. “That was really important to get it done at the bottom.”

Minnesota’s victory over Penn State came just two days after it lost 7-0 to No. 53 Ohio State in Columbus, Ohio.

“We really didn’t even play bad,” Merzbacher said. “You want to have a better result, but honestly, [the Buckeyes] probably played the match of their year.”

The Gophers played outdoors Sunday — their first outdoor match of the conference season.