The Gophers got two timely goals in the final period to defeat the top-ranked Huskies Sunday. 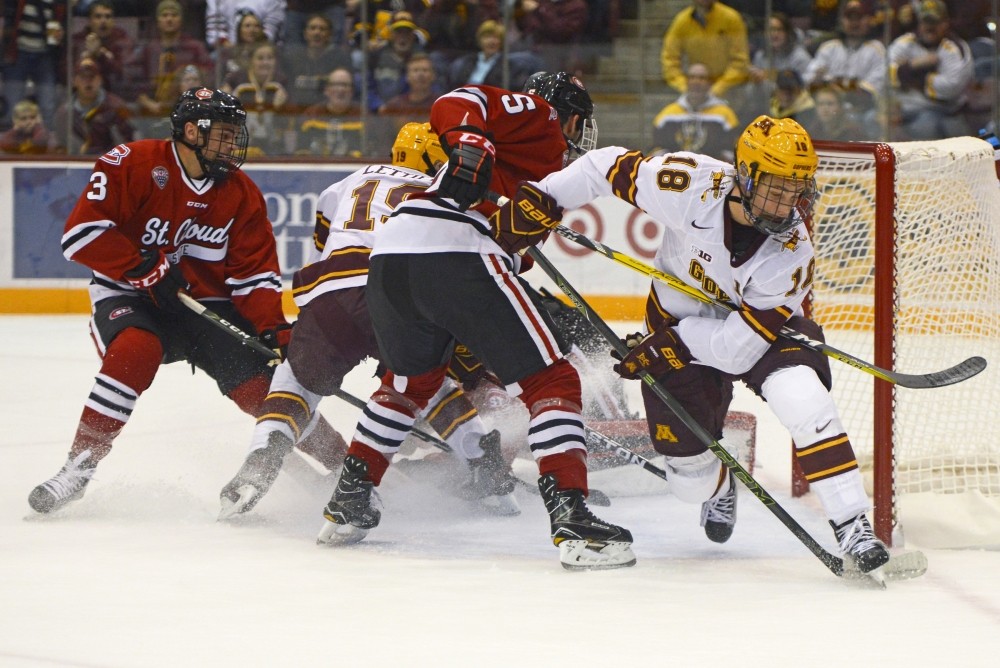 Minnesota did not come close to an upset in the first game of the series versus No. 1 St. Cloud State.

The second game was a different story.

“When you play St. Cloud, they’re so deep,” head coach Don Lucia said.  “Everybody’s got to be involved, you can’t hide guys.”

The Gophers have many offensive talents to push the game forward, but it was one of the unlikely suspects on offense who broke the game open.

Forward Darian Romanko was gifted a turnover from a St. Cloud State defender in the Huskies’ zone, right through the middle of the ice. He had ample time to shoot, which helped him put the puck right above St. Cloud goaltender David Hrenak’s shoulder. The goal made it 1-0 Gophers in the third period. The make was only his second goal of the season.

“It was a very defensive game tonight,” Romanko said. “I knew we couldn’t give up one [goal], because who knew if there was going to be another one [from Minnesota].”

The story of Romanko’s goal could be quite different, though, if it weren’t for Lucia’s successful challenge in the second period.

The Huskies looked to have scored the game’s first goal in the second period, from forward Mikey Eyssimont. The goal would have been his third in two games, if it weren’t for Lucia challenging the score for too many men on the ice. Upon viewing the challenge, the referees found the case in favor of Minnesota and rescinded the goal, preserving the 0-0 game.

“Before they even scored, the [Minnesota players] were yelling ‘too many men,’ ‘too many men,'” Lucia said. “When I saw the replay on the screen, it was obvious to me that the two guys that were coming off were 30, 40 feet away from the bench when the other guy was already on the ice.”

Goaltender Mat Robson, with help from the challenged goal, recorded his first collegiate shutout in only his third game for the Gophers. He made 34 saves versus the Huskies.

“It’s a big win for our team,” Robson said. “A step in the right direction, to say the least. We’re going to enjoy it tonight, but obviously, we’ve got to get back to work and use it as a stepping stone.

Forward Mike Szmatula scored the second goal for Minnesota, an empty-netter that added a small cushion to the lead at the end of third period.

With the victory, the Gophers handed the Huskies just their third regulation loss of the season, with the other two losses coming from No. 4 Denver.

“Now, we’ve got to do better in the Big Ten,” Lucia said. “Hopefully, we can start to score a little bit more, but if we’re not going to be a team that scores a lot, then we’re going to have to grind out wins.”