Junior AJ Petterson is on a 22-game hit streak extending back to last season, despite Minnesota's inconsistent schedule in 2011. 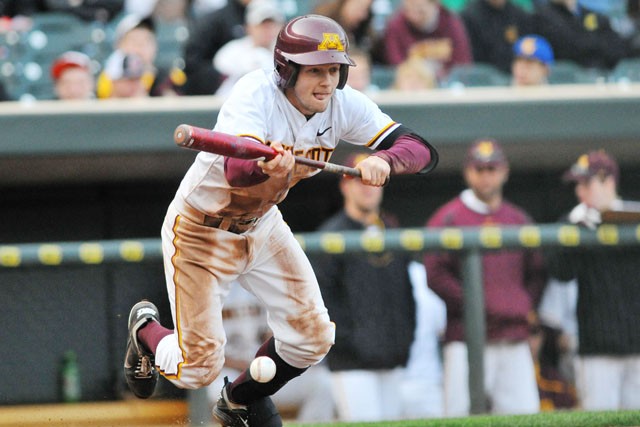 With the weather finally starting to remind University of Minnesota students that there are, in fact, other seasons besides winter, the Minnesota baseball team travels to East Lansing to take on Michigan State.

In a season that has had many road tests âÄî not the least of which was travelling for six straight weekends in search of games âÄî the Gophers are heading back to a hotel and unfamiliar dugout.

Minnesota (10-9 overall, 2-1 Big Ten) has dubbed itself âÄúthe road warriorsâÄù because of the grueling travel schedule the squad has endured, and shortstop AJ Petterson said he hopes the team will become stronger because of it.

âÄúGoing through all these hard times is going to help us at the end of the year,âÄù Petterson said. âÄúThe best teams go through tough times, and maybe at the end of the season itâÄôll come down to a big road game, and weâÄôll be at an advantage because weâÄôve played so many games on the [road this] year.

âÄúWe donâÄôt even really have a home field to tell you the truth,âÄù he added.

With a taste of home cooking and the luxury of playing in quasi-home park Target Field last weekend, the Gophers took advantage, winning two of three games against a Purdue team that tore up non-conference pitching.

Minnesota won a game Friday and split a double-header Saturday, but the game  lost was a complete game shutout in which the offense failed to string together hits.

Boilermakers hurler Joe Haase completely shut down the Gophers in his nine innings on the hill, mixing four pitches to keep the entire lineup off balance.

The bats broke out Friday and again in the late game Saturday, though, and Petterson said he thinks the offense is starting to become a more cohesive unit.

âÄúI think as an offense weâÄôre really starting to gel, and if we stick to pitching and defense, I feel confident the offense will get the five runs we need to be able to win ball games,âÄù he said.

Petterson, to this point, has been a big reason his team has been able to average more than 5.5 runs per contest. He has hit safely in every game this season and gets on base over 40 percent of the time.

His hitting streak stands at 22 games dating back to last season.

âÄúSometimes it helps adding pressure with a streak going âÄî trying to stay consistent and get a hit or two every game,âÄù he said.

He has not, however, let his streak affect the way he plays the game, which he says has always been to win.

For example, in the second inning of a one-run ball game Friday, Petterson came to the plate with runners at first and second and nobody out. Traditional baseball wisdom calls for a bunt in that situation to allow hitters later in the lineup a chance for a sacrifice fly or to drive in a run with a hit.

Petterson, though, didnâÄôt have a hit yet in the game. He consulted with head coach John Anderson and told him he felt it was best to bunt in that situation.

And thatâÄôs what he did, hitting streak be damned.

âÄú[IâÄôm] trying to do whatever it takes to win for the team, whether thatâÄôs a sac bunt when I need a hit to keep the streak going, then thatâÄôs what it takes,âÄù he said. âÄúThose things are just as important as getting a hit sometimes.âÄù

The Gophers went on to win 9-5, and Petterson later collected a base hit to extend the streak, but at the time, the game âÄî and his streak âÄî was very much on the line.

Minnesota will need Petterson to continue to set the tone at the top of the lineup for the team to be successful this weekend. He said the games will likely be low-scoring because both teams are predicated on pitching and defense.