Gophers begin life in the Northwoods

Ten Gophers players are playing in the Northwoods League this summer. 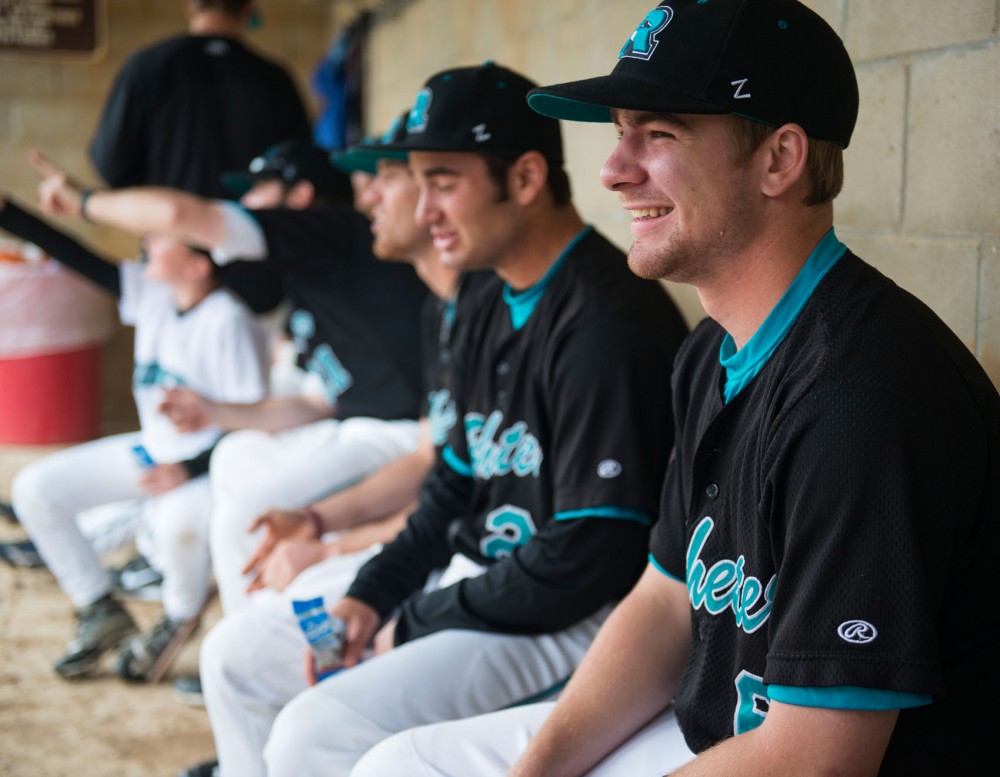 Minnesota Gopher and Rochester Honkers catcher Matt Halloran, right, waits out a rain delay during a Northwoods League game on Sunday June 9, 2013, at Mayo Field in Rochester. The Northwoods League is a collegiate summer baseball league for NCAA eligible players.

The end of the Gophers baseball season means the beginning of a new season for many players: summer ball.

And for 10 Gophers, this summer will be spent competing in the Midwest-based Northwoods League, a collegiate summer baseball league featuring 16 teams from Minnesota, Wisconsin, Iowa and Michigan and Ontario, Canada.

“It’s one of the premier leagues,” said Gophers junior Matt Halloran, who plays for the league’s Rochester Honkers.. “You get the most fans here out of any league, and it’s a lot of baseball, so a lot of guys want to play here.”

Teams in the league play 70 regular-season games from late May to August, and four teams advance to the playoffs. Gophers sophomore catcher Mark Tatera said his Duluth Huskies team has just five off-days.

“You’re playing every day,” Gophers head coach John Anderson said. “That’s a lot of baseball. If you want to play professionally, that’s what it’s all about.”

The stretch can be grueling for college players accustomed to playing four games a week.

“It’s only been two weeks, but it almost feels like two months already,” Tatera said.

The number of games gives opportunities to players who didn’t play as many during the college season.

Gophers shortstop Michael Handel played for the Madison Mallards in 2011 after redshirting his first season with the Gophers.

Between pregame work and the games, Handel said he regularly spends 10 hours at the park during a day.

The season is a grind physically and mentally, Halloran said.

“You’ve got to make sure you rest up that body because it’s a long summer,” Handel said.

During homestands, players without friends or family in the area, like Tatera, stay with host families.

Handel’s Madison Mallards have a fan base that averaged 6,200 in home-game attendance last season, he said. In comparison, an announced crowd of 1,161 attended the Gophers’ inaugural game at the new Siebert Field in April.

“There’s only a few teams in college baseball that attract [as] many fans” as the Mallards, Handel said. “It’s an unbelievable experience because you’re not used to playing with the crowd and the atmosphere.”

Prolonged bus rides from park to park, the high number of games and the raucous atmosphere provide a minor-league feel, players said. Post-game player autograph sessions can last up to 45 minutes, Handel said.

The league, which features talent from college conferences around the country, offers a similar competition level to the Big Ten, Handel said.

Handel said summer ball is the best time for players to improve.

“For basically everybody your main focus … is baseball,” Handel said. “Every day you wake up and you get to play baseball.”