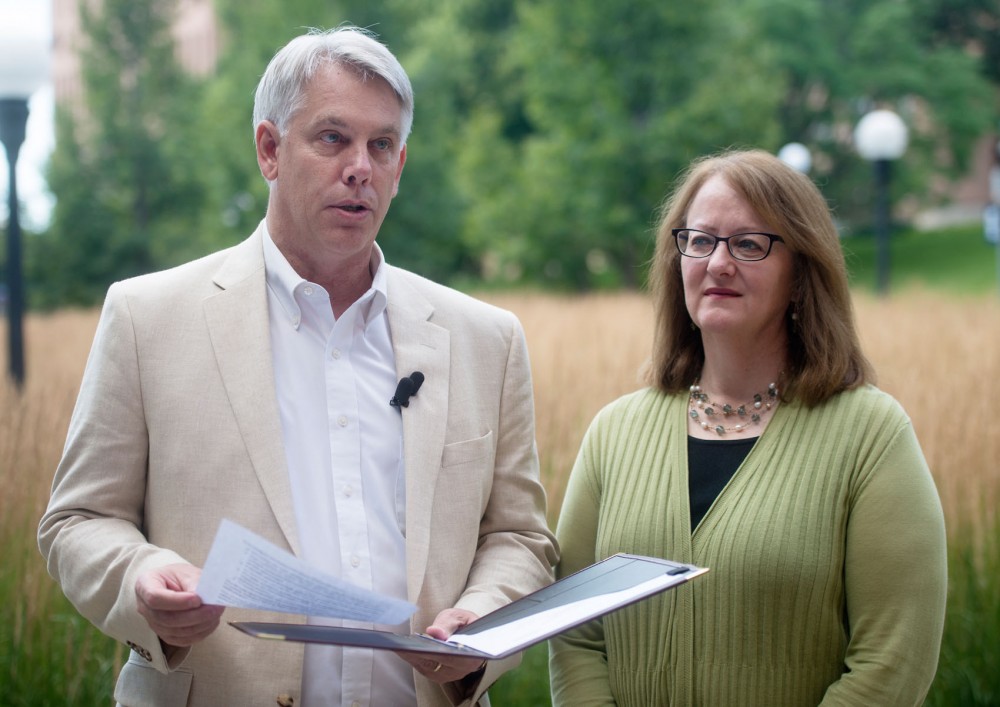 Dean of the University's College of Food, Agricultural and Natural Resources Sciences Brian Buhr and Vice President for University Services Pamela Wheelock deliver a statement regarding future plans for the construction of the new Bell Museum and observatory outside of the Cargill Building on Saturday, July 25.

Christopher Aadland
An updated plan for the new Bell Museum of Natural History includes additional space after project leaders recently raised concerns about scaled-back designs.
The revamped conception includes a partial basement, additional exhibit space, storage, meeting spaces and room for catering — features that weren’t incorporated in previous renderings of the building that prompted worry among legislators and museum board members.
“We’re going to celebrate what we have right now,” said Lee Pfannmuller, chair of the Bell Museum Advisory Board. “What we feel really confident about right now is we’ve got the elements in place to make this a success.”
With the additions, the cost of the project is budgeted to increase by almost $7 million, bringing the new museum’s cost to more than $64 million. The University will chip in for the costs of the added features, according to a letter University President Eric Kaler handed out at a closed-door meeting with project stakeholders on Saturday.
The changes come after criticism from state legislators and museum advisory board members who said they were concerned the smaller designs wouldn’t be adequate.
Originally slated to be a $57.5 million project almost entirely funded by the state during the 2014 legislative session, features originally envisioned for the project — like a basement, an auditorium, a storage room, offices, a kitchen and classroom space — were axed after unexpected costs popped up, decreasing the proposed size of the
museum by about one-third.
“We made the best use of the resources we had with that original budget,” Vice President for University Services Pamela Wheelock  told reporters after the Saturday meeting.
“But there are some things you just can’t come back and do later, like build a building and add a basement underneath it after it’s already open.”
Rep. Alice Hausman, DFL-St. Paul, said better communication between the University and stakeholders could’ve helped avoid worry over the plan’s changes.
“This shouldn’t have been this hard,” she said.
Hausman has helped lead the campaign for a new museum for more than a decade.
If the current design is approved by the Board of Regents at its September meeting, the project should finish sometime in the spring or summer of 2018, Wheelock said.
The total square footage isn’t certain, but the letter from Kaler suggests the space will be larger than the 62,500 square-foot conception that originally prompted concern. The first blueprint the project laid out a 92,500 square foot building.
“We’re hopeful it takes us to that next level … to do fantastic exhibits,” College of Food, Agriculture and Natural Resource Sciences Dean Brian Buhr told reporters after the meeting. “This part really puts us over the top on being able to provide those aspects.”
With the revamped designs, the process is about 30 percent complete, Wheelock said.
“It’s clearer what the road ahead is,” Pfannmuller said. “But there’s a lot more work to do.”
The current Bell Museum, built in 1940 on Church Street Southeast, has a number of outdated amenities, like a lack of air conditioning.
The new museum will be located on the St. Paul Campus at the corner of Cleveland Avenue North and Larpenteur Avenue West.
Delete Image
Align Left
Align Center
Align Right
Align Left
Align Center
Delete Heading