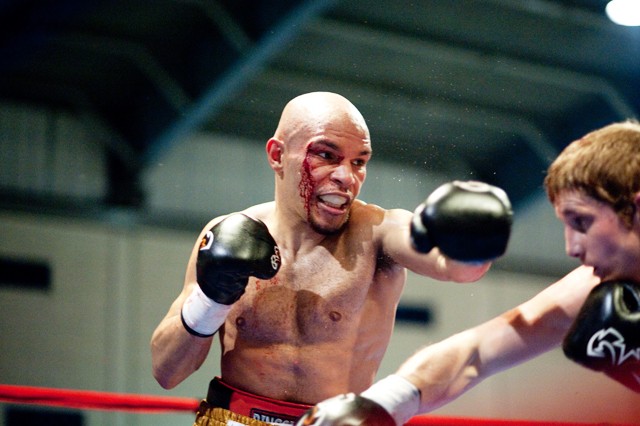 Five years ago, Caleb Truax entered professional fighting on a whim. Seeing an ad for a âÄútough guyâÄù tournament, the University of Minnesota student entered the competition along with a friend. Flash forward five years and one Minnesota sociology degree later, and Truax had his first opportunity for a milestone in professional boxing Friday night: a championship fight. Originally scheduled against Carl Daniels, Truax was set to fight for the vacant World Boxing Federation international middleweight championship. After agreeing to fight eight pounds above his normal weight of 160 pounds to accommodate the bigger Daniels, Truax received word just a week and a half before the fight that Daniels suddenly was out. The Kansas City fighter owed child support payments and was arrested and held in jail. With Daniels now out of contention for the title, British fighter Kerry Hope stepped up to fight Truax. While Hope and Daniels are both southpaws, the similarities between the two fighters end there. Daniels is a 39-year-old veteran of nearly 70 fights looking for a final shot at a major title. A 28 year old, Hope is the veteran of 14 professional fights, looking to continue a professional career of just five years. A native of Wales, Hope began his career with 11-consecutive victories but came into the fight with Truax on a slump, losing two of his last three bouts. Truax downplayed the effect of the last-minute switch, and instead said he was ready for his first title shot as a professional. âÄúIâÄôm excited to get the opportunity to fight for it, but I just got to go about my business like I always do,âÄù Truax said. âÄúFeel him out at first, see what heâÄôs got and then make my move.âÄù The first two rounds started with Hope as the aggressor, trying to get Truax to fight an up-tempo fight by lobbing multiple jabs in hopes of a response. Truax never bit, and as the rounds wore on, the pace shifted to the Osseo, Minn., nativeâÄôs favor. Countering HopeâÄôs jabs with body shots, Truax took a two-point lead into the third round. In the third, an accidental head butt between the two left Truax with a cut above his right eye and Hope with a cut on the top of his head. That round ended when Truax finally started to use his most powerful weapon, the right uppercut. Heading into the fight, Truax studied the tendencies of Hope and noticed the fighter left himself vulnerable to the haymaker. âÄúWe watched on tape how he throws his punches and ducks down right into it,âÄù Truax said. âÄúI was trying to get him to avoid the jab and slip right into the uppercut, and it seemed to be working; I was landing it pretty well.âÄù As the middle rounds passed, two trends became quite clear. The first was that Truax was winning the fight based on points up through the seventh round. The righty had been more precise and effective with his punches and countered or blocked many of HopeâÄôs shots. The second trend was that Hope was gaining momentum and getting stronger as the later rounds went on, and Truax was starting to lag and become more lethargic with his combinations. Sensing he was behind on points and likely needed a knockout, HopeâÄôs trainer started to push the fighter at the end of the eighth round, imploring the fighter to go for the knockout. âÄúSix minutes left,âÄù HopeâÄôs trainer John Tandy said between rounds. âÄúYou got six minutes left to knock him out.âÄù Hope responded, forcing Truax to the ropes with a barrage of left- and right-hook body shots from the opening ring of the ninth-round bell. Hope was gaining steam just as Truax was fading, and the fighters headed back to their respective corners to prepare for the 10th and final round. âÄúYou need to punch and punch till you canâÄôt punch no more,âÄù Tandy said to Hope before the 10th round. âÄúHow much does this mean to you?âÄù In the 10th, Hope kept fighting, using the ropes to leverage hook shots to TruaxâÄôs body. The final bell rang with no knockout, and the fight went to the judgesâÄô scorecard. The fighters hugged each other and gathered in the center of the ring to await the decision on who would be crowned the next World Boxing Federation middleweight champion. The three judges each ruled the fight 97-93 in a unanimous decision for the newest World Boxing Federation international middleweight champion: Caleb Truax. The four-point decision in TruaxâÄôs favor caught Tandy and Hope by surprise. âÄúIt was a close fight; I donâÄôt know how the judges had it by four rounds,âÄù Tandy said. âÄúI thought we won it in the last few rounds; I thought we turned it around, and I thought we had it by a round or two at the end.âÄù The decision in TruaxâÄôs favor improves the fighterâÄôs record to a perfect 14-0. The first 10-round fight of the 26 year oldâÄôs career is one he hopes to learn from for future bouts. âÄúIt was a hard 10-round fight,âÄù Truax said. âÄúI knew it was going to be hard, and itâÄôs good to get the first 10-round fight out of the way. The fact that he really pushed me, itâÄôs even better because now I know what it feels like to go out hard 10 rounds.âÄù After the fight, Truax walked into the locker room and greeted his friends with an expression that captured both the magnitude and relief of the nightâÄôs events. âÄúChampions brother, champions,âÄù he said.