Cliché or no, Hebert’s all about the team 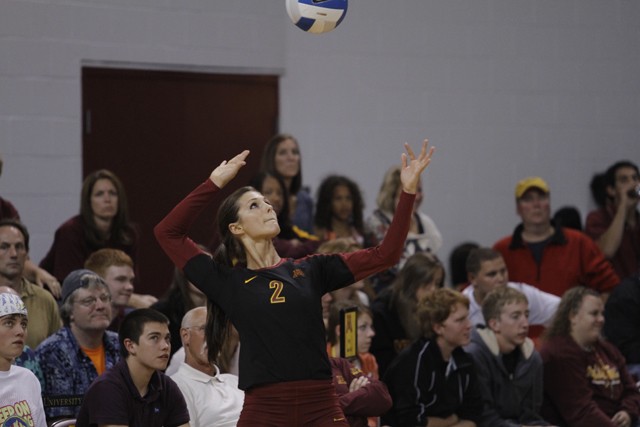 ItâÄôs a simple yet sometimes over-preached idea but one that head coach Mike Hebert has always held in high regard. ThereâÄôs no âÄòIâÄô in team. ItâÄôs a concept heâÄôs pressed upon all of his teams in his 35 years of coaching and for the 12th ranked Gophers, it seems to be working. âÄúAs a player, it was obvious to me that [team commitment] was important and when I started coaching, it became even more obvious,âÄù Hebert said. âÄúâÄ¦I was keenly aware that talent isnâÄôt enough to win in a team sport. You have to have a plan for integrating every player into the fabric of the team. They have to feel some ownership in whatâÄôs being done within the team environment.âÄù That notion is currently in full effect for the Gophers, who are playing without seniors Hayley Cowles and Lauren Gibbemeyer. Cowles, who suffered an ACL injury in pre-season camp, will miss the entire season while Gibbemeyer is considered week-to-week with a wrist injury. âÄúI think teams have to assume that there are going to be some lightning bolts that strike you along the way during a season,âÄù Hebert said. âÄúâÄ¦People who werenâÄôt playing all of a sudden now have to play and they have to feel as though they are valued and they have to feel as though the coaches and the players have confidence in them.âÄù HebertâÄôs outlook was one of the things junior Ariana Filho learned to appreciate when she came to Minnesota. âÄúWhen the top players all meet at college and play together, you really start to realize the truth behind âÄòthereâÄôs no I in teamâÄô because everyone that youâÄôre playing with is just as a good if not better than you,âÄù Filho said. âÄúYou realize you canâÄôt do anything by yourself. Added Hebert: âÄúThat notion of ownership can be difficult to achieve on a day to day basis. That feeling that everyone has a role and that everyone cares at the same level about whatâÄôs being done to accomplish goals, thatâÄôs not easy to achieve.âÄù With so many ways to quantify a teamâÄôs successâÄîfrom wins and championships to all-star recruitsâÄîitâÄôs easy to get wrapped up in a coachâÄôs resume. HebertâÄôs 13 NCAA tournaments, three Final Four appearances and annual nationally-ranked recruiting classes are proof of the success heâÄôs achieved at Minnesota. He isnâÄôt, however, quick to revel in it. âÄúI donâÄôt see it as my doing,âÄù Hebert said. âÄúI may be the orchestra conductor but the people who have accomplished these things are the players and the assistant coaches. My job is to empower people to do the best they can.âÄù His empowering has paid off. Just three weeks into the season, four players have received Big Ten honors for their performancesâÄîsophomore Tabitha Love (Big Ten Player of the Week), junior Jessica Granquist (Big Ten Defensive Player of the Week), and freshman Ashley Wittman (Big Ten Freshman of the Week and Big Ten Player of the Week). While Hebert admits the awards are flattering, heâÄôs quick to brush their significance aside. âÄúItâÄôs such a team game and we preach such a team philosophy that the individual awards really arenâÄôt talked about at all,âÄù Hebert said. âÄúâÄ¦I think the entire team knows that those awards are really team awards instead of individual awards.âÄù Senior captain Lauren Gibbemeyer, who was named Most Outstanding Player during the Diet Coke Classic, agreed with Hebert. âÄúI guess the personal labels and stuff isnâÄôt as important to me as making sure the team does well,âÄù Gibbemeyer said. âÄúIâÄôm obviously going to do the best that I can to better the team and thatâÄôs really my main goal. Everything else is an after-thought.âÄù