The University of Minnesota's Board of Regents held its final meeting of the academic year this week. 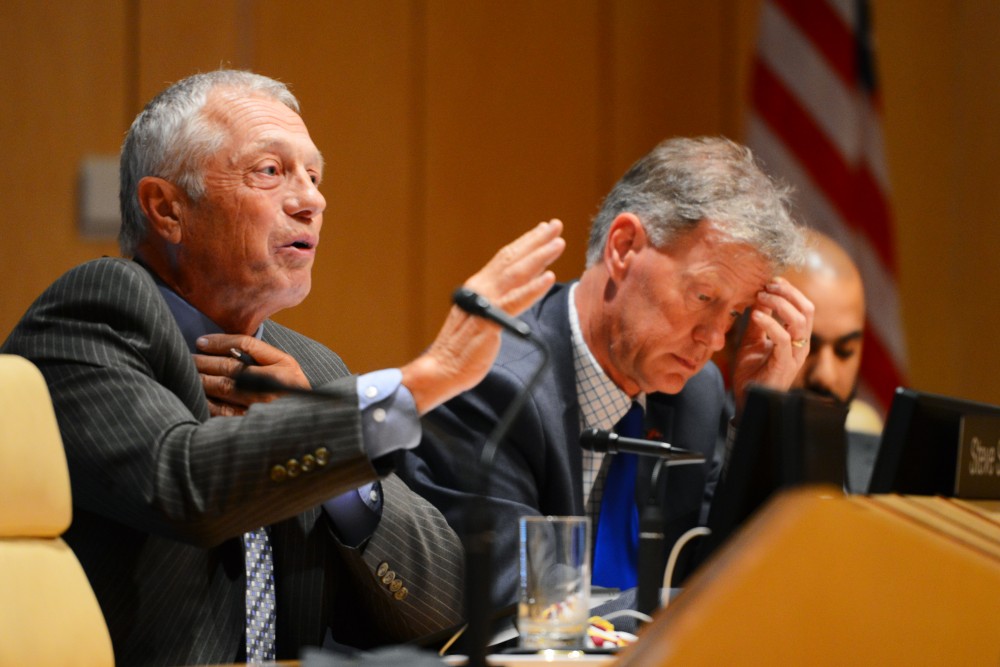 Regent Steve Sviggum asks Provost Karen Hanson a question at the Board of Regents meeting on Friday, June 8, 2018 at McNamara Alumni Center.

The University of Minnesota’s Board of Regents discussed a systemwide strategic plan, approved a new position to continue restructuring the academic health sciences network and reviewed an annual report from the alumni association, among other things at its Wednesday meeting.

Tolar’s new position is part of a plan to restructure the University’s health science operations.

Seeking faculty input on the restructuring, a January survey by the AHC Faculty Consultative Committee found a majority of its faculty think combining the dean of medical school and the vice president of health sciences into one position could curb the administrator’s ability to be impartial toward the other University health sciences schools.

However, many regents said they believe Tolar is qualified for the position.

In his previous role, Tolar had 16 units that reported directly to him. Under the new structure, Tolar will only have four units that report to him, streamlining the oversight process, University President Eric Kaler said at the meeting.

“There is a counter-argument that suggests that the dean of the medical school needs to be separate from the vice president of clinical affairs… I am not interested in doing that,” Kaler said. “That creates another senior office in the University that I don’t believe has a complete portfolio.”

A chart of the health science operation’s new structure was presented at the meeting, but several regents said they found the layout of the new structure confusing and want to discuss it further.

The board heard the fifth and last presentation on the systemwide strategic plan, which focused on aligning finances within the plan.

The plan is being developed to prioritize and explain the needs of the University’s five campuses.

Previous strategic plan presentations focused on outreach and public service, research and discovery, medicine and health, and teaching and learning. Wednesday’s presentation aligned the priorities of the prior presentations with financial elements, such as the budget requests to the legislature.

With plans to increase enrollment, the University wants to ensure it has the assets and resources to do so, said Brian Burnett, senior vice president for finance and operations.

“The University can’t be everything to everybody without the cost becoming too great… and we have to focus our dollars towards the mission,” said Regent Steve Sviggum.

Later this month, a systemwide strategic plan will be drafted based on the previous presentations, and will then be available for public review and comment. The final draft is set to be written this fall when it’s presented for action to the board.

At the meeting, the University of Minnesota Alumni Association presented its strategic plan, which includes a goal to increase funding.

One of the plan’s goal is to increase alumni engagement, with hopes that this would increase funding.

Other goals of the association include growing the University’s brand and supporting student success.

The next board meeting will be held in September.