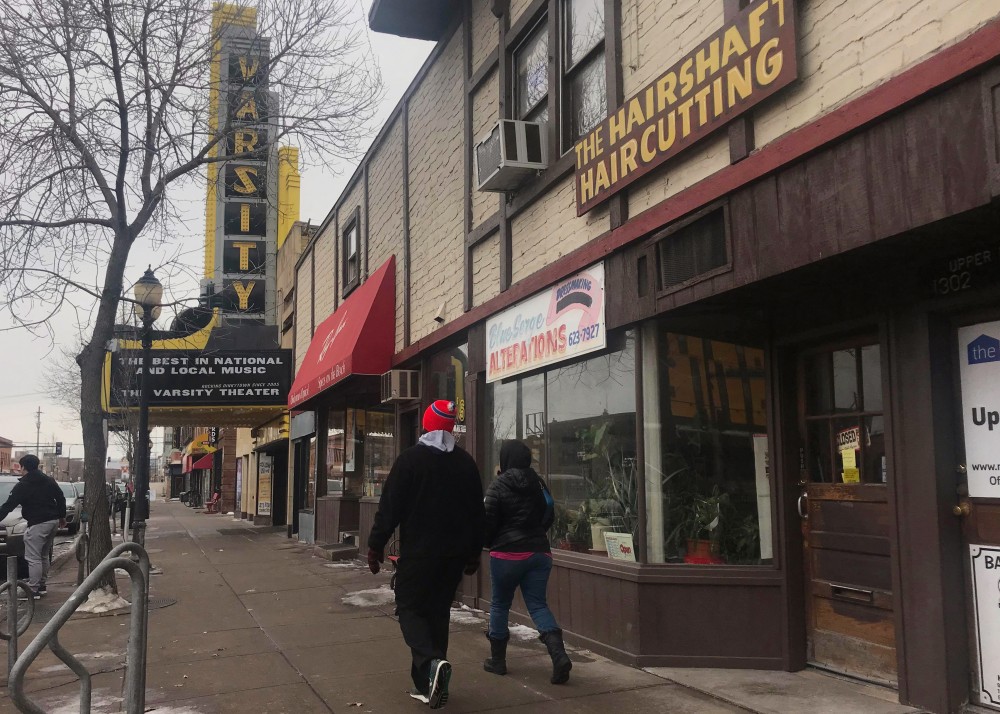 People walk past businesses on 4th Street Southeast in Dinkytown on Sunday, Feb. 18. A group of businesses are being forced to close after the building's owner decided to sell the property.

Several Dinkytown businesses on 4th Street Southeast adjacent to the Varsity Theater will close in the coming months.

Shops located in a building to the right of the Varsity Theater on the corner of 13th Avenue Southeast were recently informed by their landlord that they have until mid-summer to leave. Affected businesses are Milo’s on Fourth barbershop, Dinkytown Optical, Underground Printing, Blue Serge Alterations and the Hair Shaft barbershop.

“Honestly, the tenants here were just notified two weeks ago by a letter saying that people need to vacate by a certain date. That’s all,” said Jason Davis, owner of Dinkytown Optical.

Dinkytown Optical has been in business since 1972. Davis said the store plans to relocate within the area. Businesses weren’t informed of what would happen to the location, he said.

Detronza Kirksey, owner of Milo’s on Fourth barbershop, said he also plans to stay in Dinkytown.

“This is the oldest barbershop in Dinkytown’s history,” Kirksey said.

Kirksey has owned Milo’s on Fourth for seven years. He stepped into the role in 2011 after Milo David, the store’s original owner of 42 years and its namesake, retired.

Brett Naylor, the building’s landlord, declined to comment on the future of the building.

Randal Gast, president of the Dinkytown Business Alliance, said the building, which was constructed in 1921, wouldn’t lend well to residential usage without being torn down.

The commercial building was designated as part of the Dinkytown Commercial Historic District by the Minneapolis Heritage Preservation Commission in 2015.

Owners of properties designated to the HPC must submit applications for any alterations, including demolition and construction, to the city. The building’s west-facing wall features Dinkytown’s famous mural of Bob Dylan.

Gast said this change would be one of many recent changes to the area, adding that he can “hardly keep up.”

The business landscape of Dinkytown has shifted over the past few months, with the December closure of Espresso Royale and the recent announcement that Vescio’s Italian Restaurant will close in March. Dinkytown has also seen new additions like the Pourhouse and Ichiddo Ramen & BBQ.

Gast said Dinkytown’s changing appearance has caused concern for some residents, especially those that have been in the area for a long time.

“We have some people who have been in Dinkytown for 50 years,” he said. “It’s traumatic for some people.”