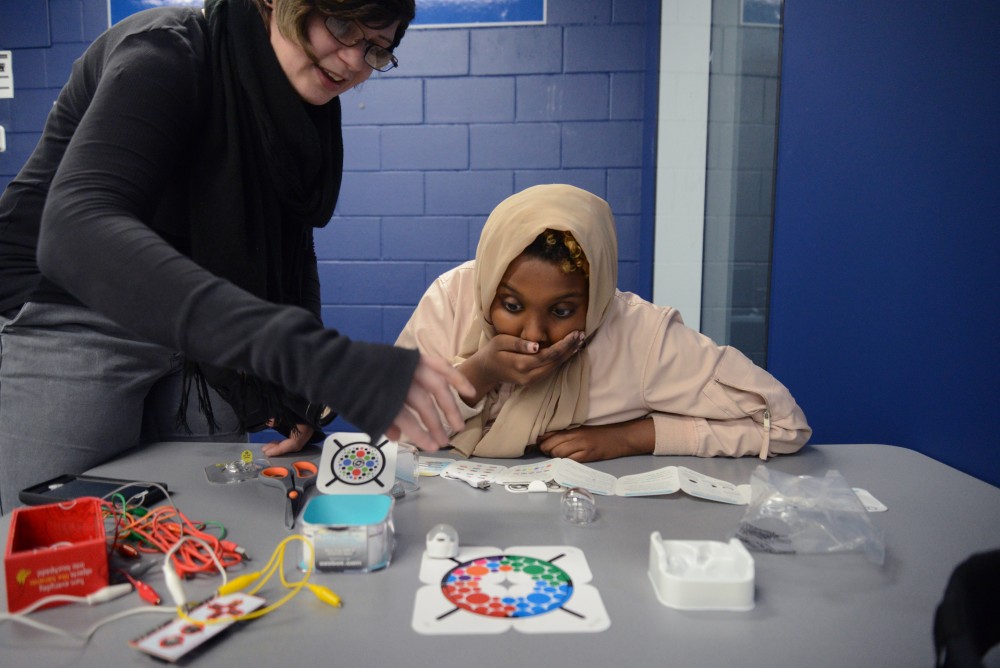 Shahad Geer watches a Ozobot miniature programmable toy robot at the tech center at the Brian Coyle Center in Minneapolis on Tuesday, Nov. 21.

A new technology center in Cedar-Riverside will connect youth from immigrant families to high-end technology.

Kids and teenagers are already testing the equipment and professional software tools at the new technology center in the Brian Coyle Center on West Bank, which will officially open Dec. 4.

Computers, printers, cameras, a sewing machine, a 3-D printer and a recording studio furnished with a variety of instruments are all available at the tech center. Shahad Geer, a Roosevelt High School freshman, said she doesn’t have internet access at home. She said she’s excited to have a place in her neighborhood to do homework and check emails.

Dube said he looks forward to the “endless creativity” that will come from Cedar-Riverside students having access to the equipment.

“It’s a great opportunity for children to reach their max potential,” Dube said.

The Clubhouse Network and Best Buy chose to fund a tech center at the BCC because of the many teens in Cedar-Riverside that lack access to technology. Students will learn “marketable” skills by using the equipment, said Gail Breslow, executive director of The Clubhouse Network.

Zakariya Hassan, a Roosevelt High School freshman, said he is excited to use the 3-D printer because it will prepare him for a future career in mechanical engineering or biochemistry.

“If I get a head start on it, I might be offered a job or opportunity,” Hassan said. Although the center hasn’t officially opened yet, it is already bustling with students during evening hours. The sign-up list for the recording studio fills minutes after the center opens.

The tech center is expected to reach 200 to 300 Cedar-Riverside students each year, Dube said.

The BCC will join a network of over 100 tech centers The Clubhouse supports across the world, Breslow said.

The goal of its centers is to give kids hands-on experience to explore whatever career they may be interested in.

“This is intended to be a place where no matter what your interest is, you can find a way to express and explore that interest,” Breslow said.

Geer said when she is done with homework she also uses the equipment for entertainment. She has started recording comedy videos, with hopes of starting a YouTube channel.

“I like that you can use it for multiple things if you want to pursue multiple careers,” Geer said.

Breslow said she hopes students use the variety of equipment to explore a multitude of future careers.

“When kids walk through the doors, we want their eyes to light-up as they see all of the possibilities,” she said.