The road remains a haven in sweep of Michigan Tech 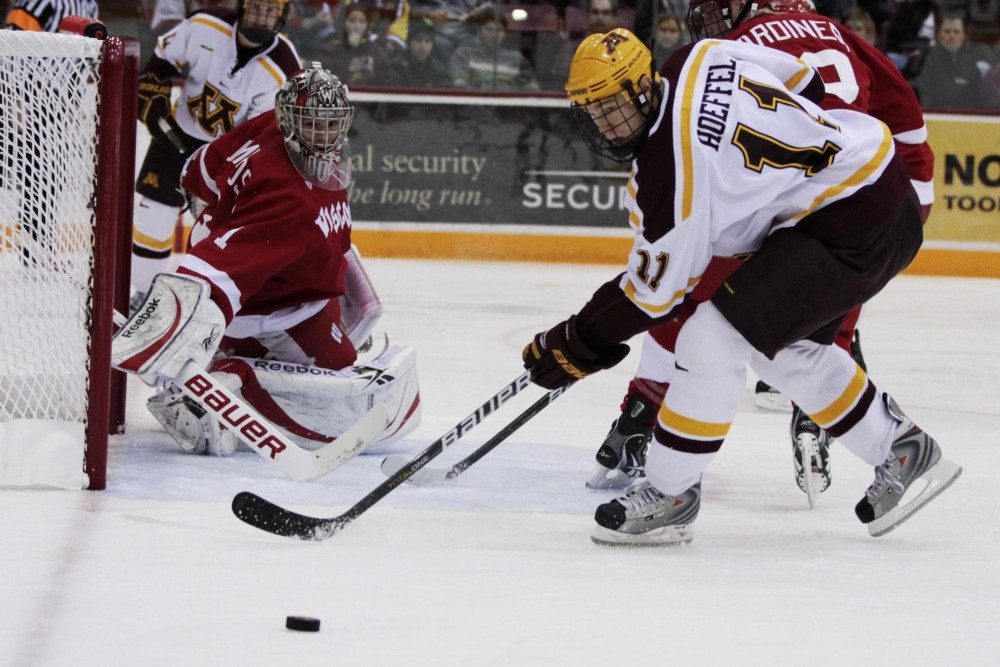 Playing away from Mariucci Arena again remedied the Minnesota menâÄôs hockey team, which improved its road record to 4-0-0 with a two-game sweep of Michigan Tech, 6-4 and 4-1. Beat up and shorthanded two weeks ago against Wisconsin, the Gophers (7-4-1 overall, 5-4-1 WCHA) regained their health in time to travel to the Upper Peninsula, but for the most part it was familiar, or at least always-healthy, names filling the score sheet. Senior Mike Hoeffel, who said before the season that the John MacInnes Student Ice Arena was his favorite arena to visit, showed exactly why with four goals and an assist, two in MinnesotaâÄôs three-goal first period Friday. âÄúI thought we came out and had a really good first period,âÄù head coach Don Lucia said after Friday nightâÄôs win. âÄúI was a little surprised because weâÄôve been off for [a] week and had three guys that hadnâÄôt played in a while, but we had fresh legs âÄ¦ and the guys did a good job offensively attacking the net.âÄù Junior Jake Hansen was the only other multiple-goal scorer; his second and third of the season, including what was ultimately the game-winner, both came in FridayâÄôs second period. Freshmen Max Gardiner and newly healthy Nick Bjugstad bookended the weekendâÄôs scoring with their first career goals. Entering the series, Michigan Tech (3-6-2, 1-6-1) was unbeaten at home, but Minnesota jumped to early leads both nights and still has yet to lose when scoring first this season. Still, the HuskiesâÄô ultra-productive power play continued its success, scoring three times on six opportunities. That did little, however, to overshadow another impressive weekend from goaltender Kent Patterson, who is gradually cementing his place as the GophersâÄô full-time starter. He didnâÄôt need to be particularly sharp Friday night thanks to MinnesotaâÄôs six goals, but made 28 saves Saturday to preserve a 3-1 margin for most of the second and third periods.