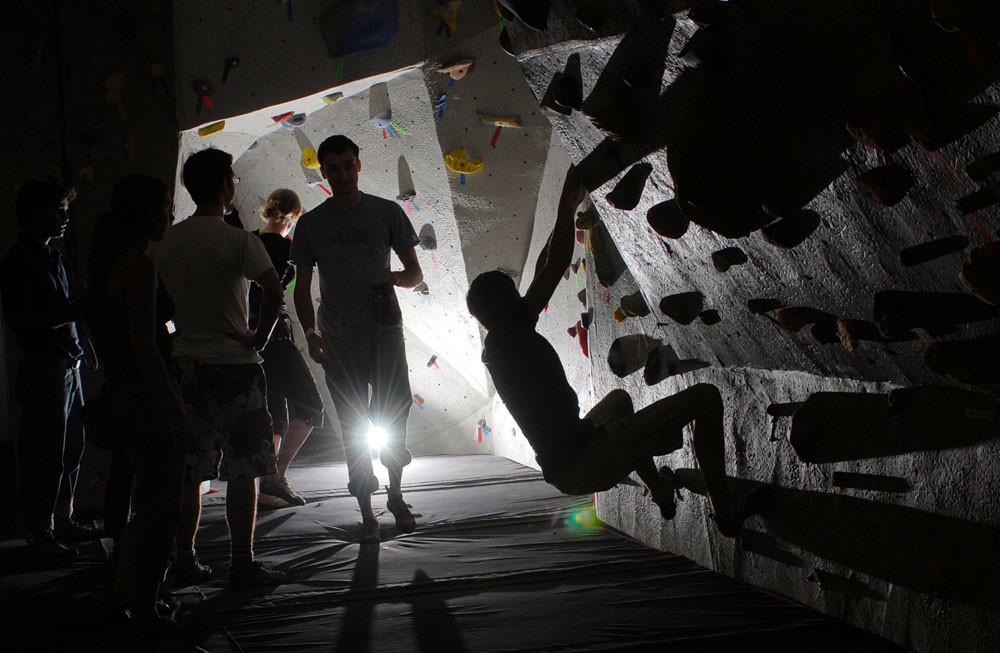 Climbers attend the grand re-opening of the climbing/bouldering wall Friday at the St. Paul Gym. The wall, torn down last spring, now has more than 900 sq. feet of climbing area.

Eager climbers now have a refurbished space in which to practice their rock-climbing skills, as the St. Paul Gymnasium held the grand reopening of its new bouldering and climbing wall Friday. The new fixture, which offers more than 900 square feet of climbing surface, replaces the old wall, which was torn down late last spring. The wallâÄôs construction had a bill of nearly $120,000, Dan Allen, senior associate director of the department of recreational sports said. The wall, built by St. PaulâÄôs Nicros Co., was paid for with money from the departmentâÄôs general improvements fund, Allen said. The fund was established with the student fees committee many years ago to address major repairs and replacements like this one. Due to wear and tear, and based on the way climbing has changed in the past 10 years, it was time for an update, Mitch Hoffman , Center for Outdoor Adventures program director, said. âÄúWe also wanted to create better balance, and had to try and utilize the small space to the best of our ability,âÄù Hoffman said. The wall took nearly three weeks to demolish and rebuild, Hoffman said, and about 30 days for surfaces to dry. Because mainly students paid for the wall, Hoffman said the rates for students will be cheaper than other area commercial gyms. The $4 a day, or $25 a semester, covers the costs to keep up equipment like shoes, ropes and bindings, Hoffman said. Vertical Endeavors in St. Paul charges $189 for a three month climbing pass , and several Twin Cities R.E.I. locations cost $10 for the first climb and $5 for each additional climb. Winston Elliot , a mechanical engineering major and avid climber, said the new wall is âÄúinfinitely cheaper, closer and quieter,âÄù than traditional indoor facilities. âÄúAnd, you donâÄôt have to wait,âÄù he added. The wall had been used prior to its formal opening. A free climbing week was held Sept. 2 through 5, and the wall was tested throughout the summer by campers attending University day camps. âÄúThe wall is closed during the summer to allow for University Youth Programs to access it,âÄù Hoffman said. The new wall is open to all University students, faculty and staff, regardless of experience. âÄúThe COA staff is here to help you if you need it, and let you climb on your own if you donâÄôt,âÄù Hoffman said.